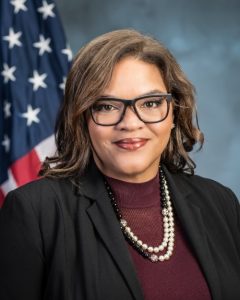 Alanna McCargo has been sworn in as Ginnie Mae’s 18th President. Recently confirmed by the U.S. Senate, McCargo was read the oath of office by Marcia L. Fudge, Secretary of the U.S. Department of Housing & Urban Development (HUD).

McCargo is the first Senate-confirmed President for Ginnie Mae in nearly five years, and her confirmation is historic as she is the first woman in Ginnie Mae’s history to hold this position. She replaces Michael R. Drayne, Ginnie Mae Acting EVP/Office of the President in her new role overseeing the wholly-owned government corporation and principal financing arm for government mortgage loans.

As of November 2021, more than $2.13 trillion of Ginnie Mae mortgage-backed securities (MBS) was outstanding, owned by investors in the U.S. and around the world.

“It is an honor to lead Ginnie Mae through its next phase of transformation, ensuring our MBS remains a secure, nimble, and reliable vehicle to support the U.S. mortgage market and continues to make affordable homeownership and rental housing available for millions of households and our veterans,” said McCargo.

Prior to her confirmation as President, McCargo was Senior Advisor for Housing Finance to HUD Secretary Fudge.

Before joining HUD, McCargo was VP of the Housing Finance Policy Center at the Urban Institute, where she led and developed evidence-based research and analysis on the U.S Housing Finance system. She helped to advance the national policy conversation around reducing racial homeownership and wealth gaps and removing barriers to accessing credit and capital.

"I have had the privilege of working with Alanna McCargo for more than a decade,” said Ed Delgado, Managing Director, MPA; Chairman, Five Star Global—parent company of DS News and MReport. “She is an insightful and dynamic leader who is a guardian for homeownership and our nation's housing system.”

McCargo also served as Executive Director of the Mortgage Servicing Collaborative, a cross-sector initiative that identified and developed policy recommendations for mortgage servicing and securitization reforms to enable stability for the housing finance system through all economic cycles.

In addition, McCargo held roles as VP and Head of Government Solutions with CoreLogic, and was VP with JP Morgan Chase's Home Lending Division.

She worked for Fannie Mae from 2002-2012 on secondary mortgage market and policy development and programs. While at Fannie Mae, she worked in partnership with the U.S. Treasury Department at the height of the Great Recession and housing crisis in 2008, executing on the Housing and Economic Recovery Act of 2008, including implementation of new housing and mortgage programs to promote mortgage servicing reforms, foreclosure prevention, and loss mitigation solutions.

“I am joining a solid and committed team that has maintained stability and results for the American people through the pandemic and very trying economic times,” said McCargo. “I look forward to working with the team and Secretary Fudge to strengthen Ginnie Mae’s impact and advance our important mission.”

Prior to joining public service, McCargo served in her personal and professional capacity on non-profit boards focused on housing security and affordability efforts including Doorways for Women and Families, Women in Housing and Finance Foundation, and in advisory roles with the Aspen Institute's Expanding Prosperity Impact Collaborative (EPIC) for housing, and with Habitat for Humanity of Washington, D.C.

Previous: Getting Ahead of the Cycle
Next: How Much Do Homeowners Spend On Home Costs?