For the first time in two months, mortgage interest rates declined over-the-week, according to the first Freddie Mac’s Primary Mortgage Market Survey (PMMS) [1] of this year.

The average 30-year FRM rate reversed its course, dropping by 12 basis points from the previous week down to 4.20 percent for the week ending January 5, 2017. The average 15-year FRM experienced a similar decline, falling 11 basis points down to 3.44 percent from last week.

“This marks the first time since 2014 that mortgage rates opened the year above 4 percent,” Freddie Mac Chief Economist Sean Becketti said. “Despite this week's breather, the 66-basis point increase in the mortgage rate since November 3 is taking its toll—the MBA's refinance index plunged 22 percent this week.”

HSH.com VP Keith Gumbinger stated on the rates decline: “Now past the end of the year and quarter, it's not unexpected that a bit of a change in direction in rates would be seen. Given the stance of the markets in the weeks after the elections (a restive period which ran right into the holidays) my guess is that many defensive investment positions were set and are now being unwound. It's also true that investors are starting to assess the prospects for changes in fiscal and tax policy with the forming administration, evaluating Fed policy and more; with rates already relatively elevated, we may start to soon need more proof that the economy is adding strength and/or that hoped-for positive stimulus will actually occur for them to be able to rise any more than that already have. Without those available at the moment, a bit of space for rates to settle back has occurred.”

Gumbinger continued, "It's not yet clear if the downdraft will continue, but indications at the moment are that there may be some room for additional smaller declines. I'll note that Treasuries have had a bit of a rally today, but we'd need a couple more days at today's level to drag mortgage rates down further."

Analysts are forecasting that mortgage rates will not get much higher than their current level over the next 12 months. Redfin Chief Economist Nela Richardson said [2] she does not expect the average 30-year FRM to rise higher than the 4.3 percent level. For much of 2016, that rate hovered above its all-time low (3.31 percent set in late 2012); even with the increase over the last two months, it is still well below its record high set in the early 1980s when it was above 18 percent. 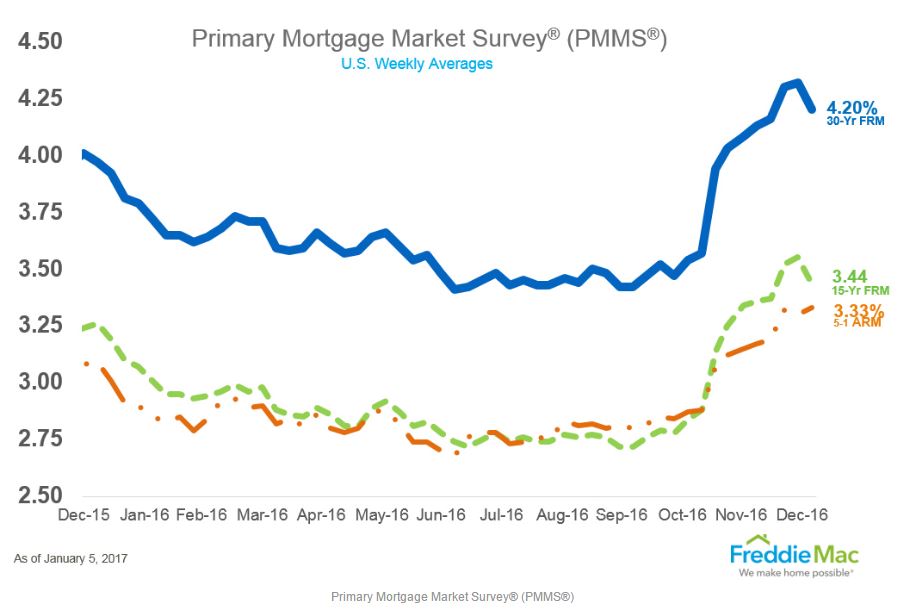 “Wall Street is now anticipating higher economic growth and inflation in 2017, and reshuffling to stocks from bonds. In general, when investors buy fewer bonds, bond prices fall (yield rises) which pushes up mortgage rates,” Richardson said. “Rates are still very low relative to historical averages and expected to remain lower than in 2015 when the 30-year fixed rate was 4.5 percent.”

Greg McBride, Chief Financial Analyst with Bankrate.com, said [3] he expects the average 30-year FRM to fluctuate between 4.0 and 4.5 percent this year but does not expect it to rise higher than 4.5 percent.

“Even if we do get all the stimulus measures that markets have priced in, this is money that's not likely to hit the economy before 2018. So we're undoubtedly going to have some volatility during the year,” McBride said. “If we have a market selloff or some kind of economic scare, don't be surprised if mortgage rates move back below that 4 percent mark for a period of time.”