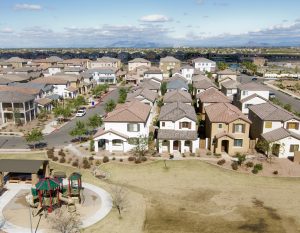 Despite a hurricane season that wrecked most of its coastal areas, Texas continued to remain America’s No. 1 growth state in 2017 according to U-Haul’s data analyzing the past year’s U.S. migration trends.

The moving and storage company calculates this trend by the net gain of U-Haul truck rentals entering a state versus leaving the state during a calendar year. U-Haul bases its migration trends by tracking movements through its network across the 50 U.S. states and 10 Canadian provinces covering over 21,000 locations.

Attributing some of the state’s increase in overall U-Haul transactions to an active hurricane season, the report indicated that the year-over-year arrivals of one-way U-Haul truck rentals to Texas rose 1 percent while departures climbed 3 percent from the 2016 numbers.

Despite a larger year-over-year increase in departures, arriving trucks still accounted for 50.3 percent of all one-way U-Haul traffic in Texas to maintain its status as the top net-gain state for the second consecutive year. Texas secured the No. 1 growth ranking for 2016 after settling for the No. 39 spot for 2015.

“You’ve heard the slogan ‘Texas Strong’ during the (Hurricane Harvey) recovery. We’re not waiting for anyone to come with handouts. Everybody is helping everybody. We know that it happened. But you wouldn’t be able to go through today and see that a hurricane hit. The recovery has been handled well,” said Matt Merrill, President at the U-Haul Company of West Houston.

Florida, Arkansas, South Carolina and Tennessee rounded out the top five in the list. Other states to make it to the Top 10 included Washington, North Carolina, Connecticut, Colorado, and Vermont. The top 10 list showed a strong growth movement in the Southeastern region. California overtook Illinois on the list as the biggest net-loss state, followed by Pennsylvania, Michigan, Massachusetts, and New Jersey.