It has been said that what goes up must come down, and the latest trajectory of mortgage rates seem to be proving that theory correct.

According to Freddie Mac’s Primary Mortgage Market Survey (PMMS) [1] for the week ending on January 12, 2017, the rate for the average 30-year FRM fell for the second straight week down to 4.12 percent—a decline of eight basis points. The average 15-year FRM rate declined by seven basis points down to 3.37 percent for the week.

The PMMS for the week ending January 12 was the first to reflect the results of the December employment situation from the Bureau of Labor Statistics [2] which reported a less-than-expected 156,000 jobs added during the month, wage growth of 10 cents over-the-month and 2.9 percent over-the-year. 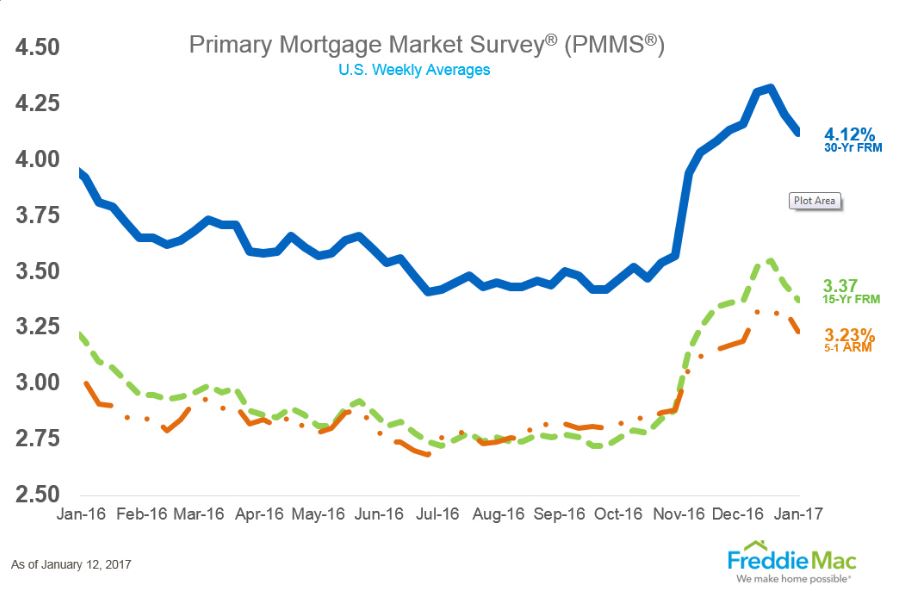 For the week ending January 5, the first PMMS of 2017, the average 30-year FRM rate dropped by 12 basis points [3] after reaching a two-year high of 4.32 percent the previous week. The January 5 decline reversed a trend of eight consecutive weeks of increases.

What will be the path going forward? It has been widely forecasted in the industry that the average 30-year FRM would not get much higher than 4.5 percent [4], or 5 percent at the highest [5], during 2017. Are two weeks of declines after eight consecutive weeks of increases a trend in the making?

In its Winter 2017 Housing and Mortgage Market Review [6], Arch Mortgage Insurance predicted that rates would rise by half a percentage point per year over the next several years, which they expect will result in a decline in total originations due to lessening demand for refinances; a longer loan life for those loans with lower mortgage rates, which is expected to adversely affect lenders' interest-rate spread income; and fewer trade-up home sales, since borrowers with low rates have an incentive to upgrade their home by using a second lien rather than sell their home and buy another one at a higher rate.

Keith Gumbinger, VP of HSH.com [7], stated, "The small decline was consistent with my overall expectations. I think we are probably close to the bottom of a working range at the moment with limited additional downside for rates unless we start to see some economic softening (whether here or abroad). It seems to me that the recent decline may be reflective of a lessening of the investor exuberance that occurred post-election, as the difficulty of effecting meaningful change in a fractious political environment may be starting to be seen."