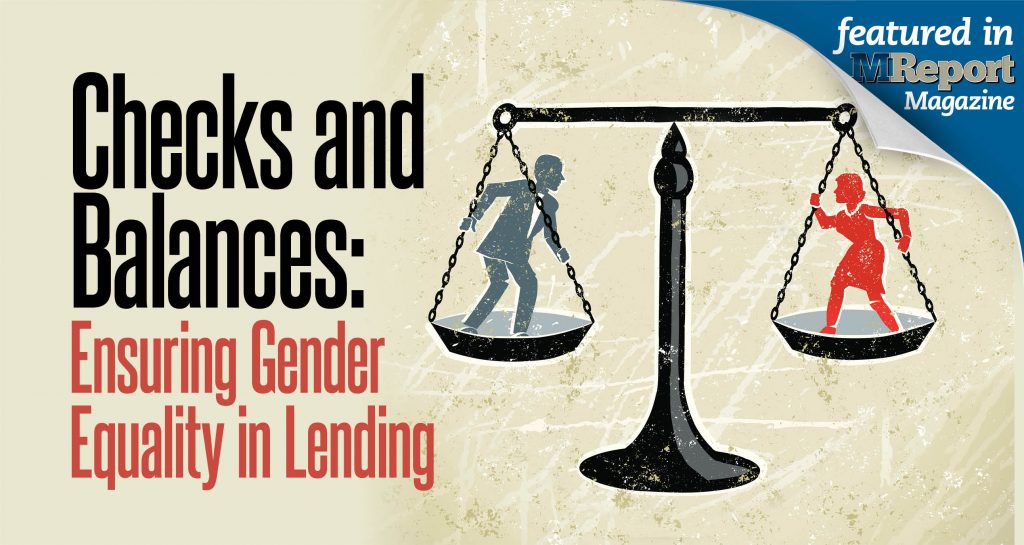 Two people with the same application are sitting in front of a mortgage lender. The potential borrowers have identical scores, backgrounds, and histories except that one individual has a box checked “Female” and the other has checked the box titled “Male.” What happens? Historically, mortgage lenders have unfairly and inaccurately treated female borrowers—especially single women, pregnant women, and minority women—as risky borrowers. The result is that women have faced serious discrimination by mortgage lenders.

The 1988 Fair Housing Amendments Act is aimed at preventing discriminatory mortgage lending practices by making it unlawful for lenders to discriminate against borrowers on the basis of sex, pregnancy, or familial status. This legislation also made intentional discrimination against pregnant women who are potential homebuyers and borrowers illegal by providing that mortgage lenders cannot automatically assume that pregnant mortgage borrowers pose a greater risk of default to lenders. In this act, HUD stated that when underwriting a pregnant woman, borrower lenders cannot: assume that she will not return to work for any specified postnatal period or anticipate that her income will be significantly reduced or halted altogether in the foreseeable future.

Notwithstanding regulations, continuation of tight underwriting in recent years has not helped single, pregnant, or minority women obtain more favorable mortgages. Beginning with the fallout of the mortgage crisis in 2008, lenders have been much more hesitant to provide favorable loans to women due to their general lower income and relative career instability, including leaving the workforce temporarily for maternity leave or a more long-term absence for motherhood or taking care of the family.

Doing it By Themselves: Single, Pregnant, and Minority Women

A 2016 Urban Institute research report titled “Women Are Better Than Men At Paying Their Mortgages” found that despite the fact that single women are more reliable in repaying their mortgages than their male counterparts, they confronted several difficulties in securing mortgage loans. These women, as compared to single men and married women, were provided less favorable loan terms, including higher interest rates, and were more often asked to provide co-signers for all loans, including ones for very small amounts. It becomes a vicious circle because when single women default on loans, it is often a result of their difficult and unfair terms. Given the barriers they face in securing loans with favorable terms, some women simply have no choice but to rent instead of purchasing a home.

Being on pregnancy, maternity, or paternity leave at the time of credit evaluation can negatively affect many mortgage terms and it is not uncommon for lenders to grant less-favorable terms to borrowers in these categories. While lenders have the right to determine the incomes of families, they cannot single out and discriminate against pregnant women and women on maternity leave and the assumption that these women will not return to work must not be a factor in the lender’s mortgage terms. These circumstances may not be considered in determining the woman’s debt-to-income ratio, the future or past history of employment compensation, or the potential borrower’s ability to repay the terms and conditions of a loan.

Women who are racial minorities may be the most disadvantaged by the mortgage industry’s discriminatory lending practices. Since a larger number of African-American, Hispanic, and Latino women are separated, divorced, or widowed than white women, they must rely heavily, if not solely, on their own earnings when providing financial information needed to secure loans or mortgages. Like single women in general, these women are only reporting one income, making it more difficult for them to secure loans.

Additional factors that influence the ability of women to secure favorable loans with reasonable terms and interest rates include pay inequality, the rent v. own dichotomy, and general underwriting practices. On average, for every one dollar that a man earns, a white woman earns seventy-seven cents, an African-American woman earns sixty-four cents, and a Hispanic woman earns only fifty-six cents. Such a gender gap in salary results in a lower income for women, with more challenges in applying for loans. Income inequality not only affects single women, but impacts married women, too because their salaries are determined as less secure and less significant by lending institutions. Thus, the working wife’s income may not be adequately underwritten in consideration of the loan terms and as a result, the couple may be offered a loan with less favorable terms than if the wife’s income was underwritten on par with her husband.

In assessing discriminatory practices by mortgage lenders, it becomes apparent that there are several different practices and stages of assessment that result in intentional and unintentional discrimination.

According to The Credit Union Times, in March 2017, the Denver Metro Fair Housing Center alleged that Bellco Credit Union discriminated against women by denying them mortgages because they were on maternity leave at the time of submitting their applications. The allegations included that Bellco also required women to return to work for a minimum of 30 days before the lending institution would even consider and begin review of their mortgage application. Clearly such blatant discriminatory lending practices are prohibited pursuant to government regulations.

Women are also confronted with unintentional discrimination when financial institutions include judgements about women’s ability to repay loans. This occurs when the underwriting includes pay inequities and fears that women will not return to work following pregnancy-and family-related leaves, despite such factors clearly violating anti-discriminatory prohibitions by HUD and the FHA.

Courts are increasingly taking action in various instances to prevent discrimination against women, especially pregnant women. According to a HUD press release published in May 2017, dating back to 2001, HUD has received almost 150 complaints alleging maternity leave discrimination against mortgage lenders across the country. HUD has also obtained over $8 million in settlement compensation for borrowers in suits involving maternity discrimination by mortgage lenders. The Credit Union Times reported in April 2017 that the U.S. Justice Department is actively pursuing legal action against lenders who discriminate against women on maternity leave when they submit their mortgage applications. The Justice Department reported on November 1, 2017, that it has settled many cases involving mortgage discrimination against women and imposed financial sanctions against several large lending institutions, including Bank of America, PNC Mortgage, Wells Fargo, Citizens Bank, and Cornerstone Mortgage Company.

Lenders are also likely to face increased litigation in the future for any form of discriminatory lending practices. Pursuant to the May 1, 2017 United States Supreme Court decision in Bank of America v. City of Miami, municipalities have standing to pursue actions against lenders for any financial impact suffered by a municipality caused by biased mortgage practices. Therefore, with the financial resources of municipalities and the several studies presently being conducted on discriminatory mortgages, it is likely that there will be an increase in individual lawsuits related to race, gender, and marital status against lenders.

How can this pattern of discrimination by lenders change? In an article on discriminatory practices in mortgage lending in February 2017, Dr. Rick Roque, founder of Menlo Company, suggests an overhaul in the Educational Management System (EMS) for mortgage lenders. “Educational systems organized and implemented across processing and underwriting teams to effectively address such blatant violations of Fair Lending are critical to addressing this issue. The challenge is uniformity within a distributed retail mortgage lending environment where underwriters and processors reside in offices across the United States, commonly trained to detect when levels of scrutiny are applied to applications that violate Fair Lending guidelines,” said Dr. Roque. According to Dr. Roque, EMS systems implemented across an organization with regular reviews test cases and updates for appropriate staff on the evolution of fair lending regulations and enforcement actions that take place are critical to both protecting consumers and lenders from violating regulatory guidelines.

Consumer advocates recommend that the Consumer Financial Protections Bureau require additional disclosures about credit scores and other lending factors. Others are of the opinion that integrating women into the loan origination process by hiring more women underwriters and loan originators will help alleviate discriminatory lending practices. An additional resolution is for lenders to have a more process-driven, gender-neutral review process to avoid the possibility for gender-based discrimination. Finally, there are those that suggest the use of an unbiased mortgage algorithm or another form of artificial intelligence will remove potential biases and discriminatory tendencies from the mortgage origination process. Regardless of the process implemented, it is clear that lenders need to look at their processes and data and make changes to assure they are not discriminating against the borrower because she checks the box “Female” as opposed to “Male.”

Previous: Real Estate Said Goodbye to 2017 With Record Prices
Next: Homeowners Might Not be Ready to Sell Just Yet

Debbie Hoffman is Co-Founder of Symmetry Blockchain Advisors where she works with clients in their blockchain development and initial coin offerings utilizing her expertise in law, finance, blockchain, cryptocurrency, and technology innovation.