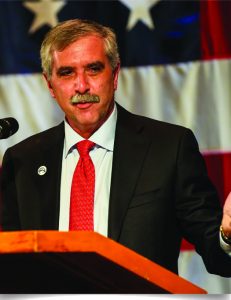 Editor’s note: This interview originally appeared in the January issue of MReport.

Since 2011, Bruce M. Rose, Founder and CEO, The Carrington Companies has hosted the Annual Carrington Charitable Foundation Golf Classic in Newport Beach, California, benefiting our nation’s severely wounded heroes, which has raised nearly $2 million each year. He spoke to MReport about the work done by the foundation to support veterans and why it was important for the industry to stretch a little for the benefit of those who protect our freedom.

M // What was the impetus behind the founding of the Carrington Charitable Foundation?

ROSE // The Carrington Charitable Foundation (CCF) was created as a means to give back to the communities that The Carrington Companies work and live in. My wife Rosemary and I had always made donations anonymously, not wanting to bring attention to ourselves. But we realized that when you have 100, 500, then 5,000 employees, more visible leadership could organize a significant impact on whatever cause that the foundation selected to support. By encouraging our associates, professional relationships, vendors, and friends to follow our lead we could raise a lot of capital to help those in need. Further, by allowing our associates to direct some of the giving to causes that are important to them, we could also communicate back that their voices and causes matter.

M // One of the CCF’s core programs is Carrington House. Can you explain the tenets of this program as well as how the veterans are eligible?

ROSE // Carrington House was originally modeled after the Fisher House program providing temporary housing for the families of veterans who were enduring the process of recovery and rehabilitation at major military medical centers. We recognized that the family unit was a critical element in the physical and psychological recovery of a catastrophically wounded veteran and wanted to directly address that need. Fisher House unit availability was somewhat limited when compared to the patient population in the hospitals between the 2010 and 2015 period, and we thought more temporary housing was needed. However, through our direct contact with the veterans through the Veterans Airlift Command, we recognized that availability of permanent housing adapted to each of the wounded veteran’s specific needs was even more critical, so we began addressing that need instead, first with two partner foundations and then on our own. To date, over 30 individual houses have been built, each specifically adapted to the veteran’s individual injuries as well as the needs of their families.

It is also important to note the participation of Bank of America who donated REO assets to CCF. Carrington Development Company repaired the typically damaged houses and prepared them for sale, Carrington Real Estate sold the houses and the proceeds were redeployed in favor of constructing new homes for the veterans that needed them or rebuilding existing structures. The donations from Bank of America significantly enhanced the progress we were able to make and the number of veterans and their families whose needs we’ve been able to address.

M // You mentioned that the Annual Golf Classic raised over $1.7 million to fund veteran programs, on average how much does CCF raise each year to support these programs?

ROSE // We have been averaging just short of $2 million annually since our first major fundraising event in 2011. That has enabled us to support a number of deserving veterans’ causes, such as the Veterans Airlift Command, which provides free private jet transportation to severely wounded veterans and their families; The Honor Foundation, which assists veterans transition back into the civilian workforce; and organizations like the Travis Mills Foundation, which help veterans rediscover a sense of purpose as they move forward with their lives. In addition to our traditional fundraising activities, we are now working on new steps to apply for corporate, government, and public grants as well as testing interest among our customer base for support.

M // On the lending side, is lending to veterans different than other groups?

ROSE // As an industry, we should strive to treat all of our customers with equal respect and transparency in all of our dealings. That said, if we can stretch just a bit further in our efforts for the benefit of those that have fought and may have sacrificed protecting our freedom, it is certainly a well-deserved extra effort, and veterans have a special place in the hearts of our mortgage lending team. We’re very active in lending to veterans—between 20 and 25 percent of our loan volume are VA loans. Those loans give veterans some benefits that other borrowers don’t have; for example, veterans can get 100 percent financing with a VA loan, eliminating the need for a down payment. There are other benefits that reduce borrowing costs and offer special refinancing options. Our team has been trained to look for all of the available benefits and deliver them to our borrowers who have served in the armed forces.

M // How can the industry become involved to help support CCF?

ROSE // CCF represents one of the best veterans-focused foundations sponsored by a financial services firm outside of the major depositories. While we have enlisted the assistance of our vendors, professional relationships, and the communities around us, we would love the support from any willing participants elsewhere in the industry and welcome the direct discussion. We need capital, fundraising participation, and references to grant opportunities that we can apply for to further our mission. I am open to a discussion with anybody looking to help our efforts or start one on their own.

Previous: Where Is Mortgage Fraud Risk Rising?
Next: Issues in African American Homeownership