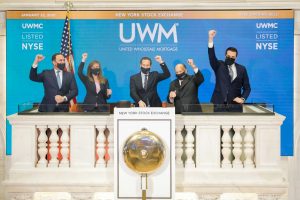 The Pontiac, Michigan-based UWM is the first mortgage industry company to go public this year. The company’s stock, listed as UWMC, made its trading premiere at $11.95 a share.

UWM went public through a merger with Gores Holdings IV [2], a special purpose acquisition company (SPAC) that created a $925 million infusion resulting in a combined company with a $16.1 billion valuation. SPACs operate by raising funds from investors and seeking out private companies to take public.

UWM is the nation’s second-largest mortgage originator, generating $54 billion in home loans during the third quarter of 2020. The only originator that surpasses UWM is Quicken Loans, which went public last August.

All current UWM employees will receive a minimum of $1,000 in company stock, with specific amounts varying based on the length of employment and other factors. Ishbia and his family will retain 94% of the company’s ownership.

"So if you’ve been here one day, you get $1,000 worth of shares," Ishbia said in a Detroit Free Press interview [3]. "But some people will get tens and hundreds of thousands. We’re giving away between $35 million and $45 million shares of ownership in the company to our team members.”

Other industry companies that are planning IPOs for this year include the residential brokerage Compass [4], which submitted a draft registration statement with the U.S. Securities and Exchange Commission for a potential initial public offering last week, along with Home Point Capital Inc., the parent company of the mortgage originator and servicer Home Point Financial Corp. [5], and the residential mortgage lender and servicer AmeriHome [6]. Other mortgage companies that floated the idea of an IPO include loanDepot [7], Caliber Home Loans [8], and Finance of America [9]—each announced their plan in late 2020 for public offerings but have yet to follow through with those announcements.