Home >> Daily Dose >> What is Holding Down Housing Inventory?

What is Holding Down Housing Inventory?

“At Home Value Forecast, we’ve written about it often—how the drop in housing starts post-crisis made inventory scarce, which as a result led to low Months of Remaining Inventory (MRI) and fierce competition for homes on the market,” said Tom O’Grady, CEO of Pro Teck Valuation Services.

“Even with stronger home construction in recent years, more increases in the supply of new homes will be needed to balance out the market, reflected in rapid house price appreciation in recent years,” said David Berson, Chief Economist with Nationwide.

MRI is calculated by dividing current number of active listings by the monthly sales rate, thus combining supply and demand into one number. According to Pro Teck, an MRI of approximately six months indicates a balanced market; in December 2016, one-fifth (20.63 percent) of communities in the U.S. had an MRI of under three months—compared to 12.7 percent in December 2015 and 9.17 percent in December 2014. The increase in communities with an MRI under three months from slightly higher than 9 percent up to 20.63 percent in two years indicates a 125 percent increase, indicating a “dramatic shortage of homes for sale in a two-year period,” according to Pro Teck. 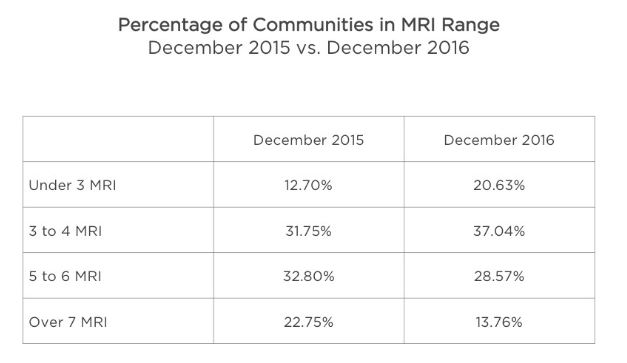 “The Texas CBSAs (core-based statistical areas) of Dallas and Fort Worth both show up in the Top 10 list this month, boasting 55 and 53 Sold Days on Market—the lowest two in the Top 10,” Pro Teck stated in its report. “Furthermore, all of the CBSAs featured in the Top Ten show a drop in Active Listings—something to be expected this time of year. This number will likely increase as the spring buying season approaches.”

On Tuesday, the National Association of Realtors (NAR) reported that inventory dropped by 6.3 percent over-the-year in December down to 1.65 million existing homes for sale (lowest since NAR began tracking the data in 1999) and has declined over-the-year for 19 straight months.

"Housing affordability for both buying and renting remains a pressing concern because of another year of insufficient home construction," NAR Chief Economist Lawrence Yun said. "Given current population and economic growth trends, housing starts should be in the range of 1.5 million to 1.6 million completions and not stuck at recessionary levels. More needs to be done to address the regulatory and cost burdens preventing builders from ramping up production."