As time goes on habits change, fads appear and inexplicitly disappear seemingly as fast as they showed up, and yet, one thing that seems determined to stick around is the internet.

According to the National Association of Realtors (NAR), 41% of recent buyers start their home buying journey online with a record 95% of buyers utilizing the internet at some point during the search process.

All-in-all, homebuyers who successfully purchased a home last year viewed an average of eight homes before making a final decision, a record low. While this number may seem low due to the ease at which homes can be found online, but it roughly tracks with research from previous years.

The NAR has tracked the number of homes that buyers viewed before purchasing since 1987; between 2009 and 2011 buyers reported viewing 12 homes before purchasing due to plentiful inventory that was available after the bust, a record high. During the boom years, buyers typically viewed nine homes. According to Jessica Lautz, the VP of Demographics and Behavioral Insights at the NAR, buyers are using technology in a way that was not even possible in 2006—virtual tours, 3D photos and videos are now prevalent in the process allowing buyers to quickly create a short-list of homes they are interested in. 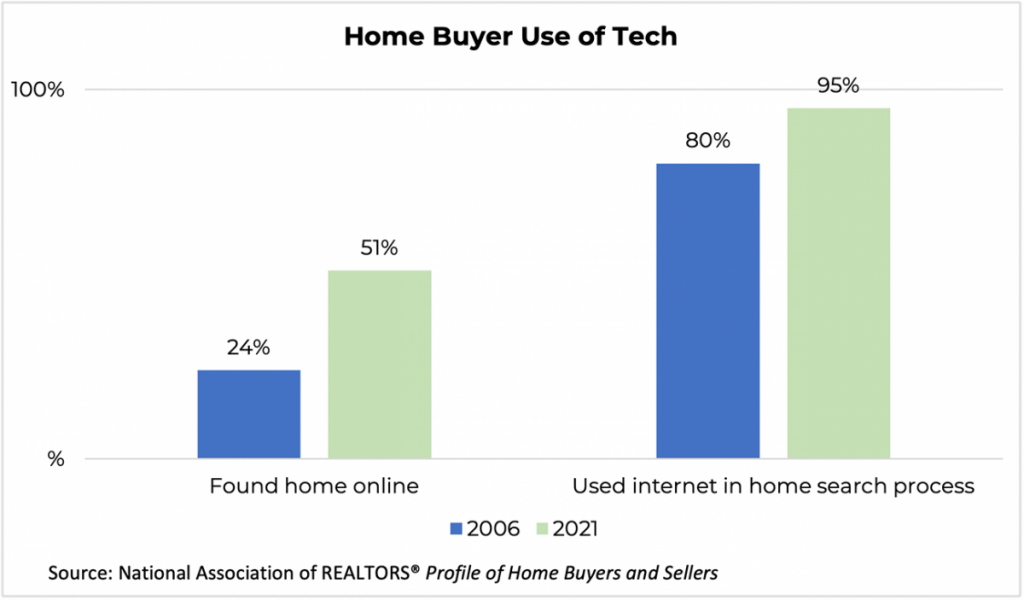 “Home buyers today have the ability to view homes online and quickly weed out what they want to see versus what can be discarded. Buyers can walk through virtual tours, view videos, see detailed photos in a way, 2006 technology did not allow. Among the eight homes viewed by buyers—three were viewed only online through virtual tours, virtual video tours, or virtual open houses,” Lautz wrote in her report. “In 2006, 80% of buyers used the internet to search for homes. Today, that share is 95% of buyers. (It is shocking that 5% of buyers do not use online tools in the search process, but a similar share bought from the previous owner who they likely know. They likely are familiar with the property.) In 2006, 24% of buyers first spotted their home online. Today, that share is 51%."

The length of time buyers remain in the market has also changed of late. “Technology and tight inventory have also likely played a role in the number of weeks a buyer is searching for a new home,” Lautz continued. “Buyers searched for just eight weeks before deciding on the home to purchase. From 2009 to 2013 buyers took their time and looked at homes over 12 weeks. As homes were moving at a slower pace, they could decide over a longer timeframe and perhaps view a home several times before putting in a contract. Buyers today do not have that luxury and need to make fast decisions on which home to place on offer on, as there is likely another buyer ready to pounce right behind them. From the November REALTORS Confidence Index, homes typically had 3.8 offers in November 2021.”