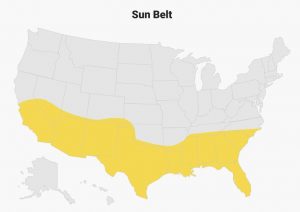 According to a new report from Redfin, Phoenix was named the most popular U.S. migration destination of 2021—followed by Dallas and Orlando. Redfin estimates the Phoenix metro gained an estimated 85,000 residents from other metro areas in 2021, far more than any other metro. Dallas followed, gaining around 56,000, while Orlando gained about 53,000.

Nine of the 10 most popular migration destinations of 2021 are in the Sun Belt region, and nearly half of these areas had a median home-sale price under the national median of $383,000 in December. Hundreds of thousands of Americans flocked to Sun Belt cities last year in search of affordability, as housing costs are rapidly rising.

The top 10 metros that gained the most residents in 2021 are:

“Moving across the country is now easier for many Americans, thanks to remote work. That cultural shift is here to stay,” said Redfin Deputy Chief Economist Taylor Marr. “What’s changing is the affordability of the most popular destinations.” This is largely due to so many remote workers taking advantage of low mortgage rates and moving in from other areas. Nationwide, 31% of Redfin.com users looked to move to another metro in 2021, up from 25.6% in 2019, before the onset of the pandemic.

The typical home in Phoenix sold for $435,000 in December, increasing 28% more than last year, while the average monthly rental payment increased 26% Y-o-Y to $2,100. Prices of consumer goods and services are also increasing in popular migration destinations, with prices in Phoenix up 8.4% year over year in Q4—the second-highest inflation rate in the U.S.

“Some locals, particularly renters who aren’t able to take advantage of rising home values, are getting priced out of places like Phoenix and Austin as the cost of housing and other goods and services go up,” said Marr. “New construction tends to be robust in sprawling Sun Belt cities, and local governments ought to continue to prioritize building new homes to keep up with ongoing demand.”

House hunters with larger budgets are fueling rapid price growth in most popular destinations. In eight of the 10 most popular areas, the average out-of-town patron's budget was at least 15% higher than the average local consumer’s budget in Q1 of 2021.

“Sellers are listing their homes at higher prices than ever before, partly because of huge demand in the last year from out-of-towners,” said Austin Redfin agent Barb Cooper. “I recently had a couple looking for a 2,000-square-foot home anywhere in the Austin area for under $300,000. I had to tell them it doesn’t exist.”

The report ranks migration destinations by net inflow, a standard measure of how many more people moved into a metro area than out. The estimates of net inflows are based on search data from Redfin.com and the U.S. Census Bureau.

To read the full report, including methodology, click here.