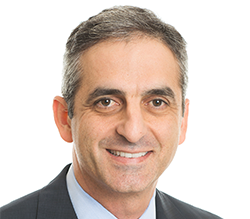 Black Knight, Inc., a provider of integrated software, data and analytics to the mortgage and real estate industries, announced that Anthony Jabbour will assume the role as the company’s CEO on April 1. Current CEO Tom Sanzone will become the company’s Vice Chairman of the Board and will assist with the transition.

Jabbour was most recently the COO of Fidelity National Information Services, Inc.’s Banking and Payments business. In this role, he had global accountability for solution development, sales, and delivery of banking and payments offerings for clients of all sizes and in all geographic markets.

“Anthony has a strong track record of successfully growing businesses both organically and through acquisitions, establishing strong client relationships and managing large, complex technology operations in the financial services industry,” said Bill Foley, Executive Chairman of Black Knight. “He will build on the strong foundation that Black Knight has established, and I am confident he and the management team at Black Knight will take the company to the next level.”

Foley continued, “Tom was Black Knight’s first CEO. His goals were to increase shareholder value and create a strategy and structure for the company that would set the course for future success, which included enhancing the company’s ability to cross-sell its products. He exceeded our expectations on all fronts, and we are grateful for his contributions in that role and look forward to working with him in his new position.”

Since joining FIS in 2004, Jabbour held positions of increasing responsibility in operations and delivery services as a key member of the executive leadership team.

Prior to joining FIS, Jabbour began his career in IBM’s Global Services group managing complex client projects and relationships. Among the key projects was the launch of a stand-alone Internet bank for CIBC, a major Canadian financial institution. That project led to him joining CIBC, where he built similar capabilities for their U.S. market.