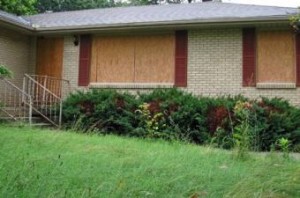 According to a report released on Monday, vacant and abandoned properties have a far-reaching toll on the communities they reside in—not only seeing lower property values but decreasing the values of neighboring homes as well.

Titled “Curing Community Blight: A Cost-Benefit of Clearboarding versus Plywood to Secure Vacant and Abandoned Properties,” the study found that vacant or abandoned homes worth approximately $200,000 lose $70,000 of their value while adjacent vacant properties drop in value by $100,000. According to a Harvard University Joint Center for Housing Studies report referenced, 1.3 million vacant residential properties still plague the economy.

Today’s report was commissioned by Community Blight Solutions and Founder and Chairman Robert Klein (no relation to Aaron Klein.)

“I think that this white paper makes it pretty obvious and pretty clear from a data perspective that the way we’ve been doing things up until now in the industry in terms of maintaining and boarding vacant properties is not the right way to go,” Klein said in an interview with MReport. “We did it because it was the only option available to us, but as new technology becomes available its time the industry take a new approach and find better ways to protect the value of homes and the value of communities. I think this is a step in the right direction.”