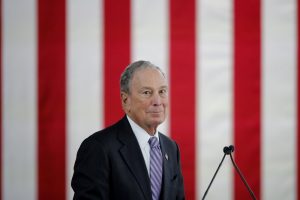 Photo courtesy of the Associated Press

Democratic Presidential Candidate Michael Bloomberg proposed merging Freddie Mac and Fannie Mae as part of his plan to rein in Wall Street if he was to become President.

CNBC states that Bloomberg’s plan would bolster reforms either put in place or strengthened as part of the 2010 Dodd-Frank act in response to the Great Recession.

A press release from Bloomberg’s campaign states his plan includes merging Fannie Mae and Freddie Mac into a single-government owned mortgage guarantor to “ensure taxpayers are properly compensated for loan guarantees” and low-income households are well-served.

Fannie Mae finances 25% of all single-family mortgages in the U.S.

Fannie Mae said they have no comment on the plan.

David Stevens, former Federal Housing Commissioner and former President and CEO of the Mortgage Bankers Association said the plan “deserves serious consideration” and might be a more favorable way to structure the future of the housing finance system.

“Mike (Bloomberg) is right when he cautions against simply putting the GSEs back the way they were when they failed,” Stevens said. “One thing is for sure if Bloomberg starts looking like a front runner, good luck trying to put out a stock offering on Freddie and Fannie.

“After all, who would risk investing in these guys if the next President looks like it could be Bloomberg.”

Tim Rood, Chairman and Founder of The Collingwood Group, a SitusAMC company, said the idea of merging the GSEs was discussed soon after they were taken into conservatorship. The plan, however, was quickly abandoned as lawmakers realized that "the only thing potentially worse than a duopoly in mortgage finance was a monopoly."

"The rivalry between Fannie Mae and Freddie Mac is critical for maintaining the competitive DNA of the two organizations to ensure innovation and disruption that serves lenders and borrowers alike," Rood said.

He added that one of the most critical aspects of reform is "untangling the knot" that has bound Fannie Mae and Freddie Mac priorities to satisfy their public charter and mission, along with their fiduciary responsibility to shareholders.

"The combined organizations would have at least a 50% market share of a $2 trillion origination market and guaranty over $5 trillion worth of RMBS. If Bloomberg intends to keep the combined enterprise as privately held then their market share could grow to well beyond 50% if left unchecked," Rood said.

Bloomberg was Mayor of New York from 2002 to 2013. During that time, he opposed certain proposals to tighten banking oversight, calling them “shortsighted.”

“The financial system isn’t working the way it should for most Americans,” Bloomberg said in a release from his campaign. “The stock market is at an all-time high, but almost all of the gains are going to a small number of people, and our economy is still vulnerable to another shock like the 2008 financial crisis that devastated families and communities all over the country. President Obama made important progress strengthening our financial system and protecting consumers—but President Trump has spent the last three years gutting those safeguards, while giving a huge tax cut to the wealthiest people. As president, I will toughen the Volcker rule, protect Americans from predatory and discriminatory practices—and harness the power of the financial system to spread opportunity and drive economic growth in every community.”

Bloomberg also introduced the idea of a 0.1% tax on all financial transactions to raise revenue needed to address wealth inequality, and support measures such as speed limit on trading, in an effort to curb predatory behavior and reduce the risk of destabilizing “flash crashes.”

Previous: Economic Outlook: Housing’s Place in GDP Growth
Next: Is the Refinance Boom a Sugar High?