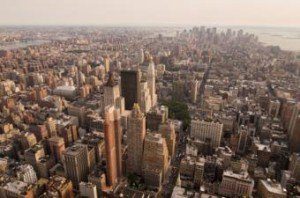 It isn’t easy living in the Big Apple, ask any homeowner in the metropolis and they’ll agree. But, they’ll also agree that there’s no place like New York.

The study called, “StreetEasy New York City Housing and Moving Trends Report” surveyed 1,000 renters and homeowners living across all five boroughs and detailed the ways they struggle to find an affordable home in NYC.

It indicated that 57 percent of New Yorkers would recommend life in NYC and found that New Yorkers pay 1.3 times more for housing in absolute terms than the average American. Though median rent is higher in New York than the rest of the country, it’s roughly in line with other big cities like Boston and San Francisco. New Yorkers, in fact, are more likely to rent and take on roommates than renters in other major American metros.

The study found that more than 68 percent households in New York rent their homes, whereas only 36 percent households rent in the rest of the country. Around 72 percent New Yorkers have spouses, partners, or roommates with whom they share rent payments compared to the national average of 66 percent.

Interestingly, while 46 percent of the respondents surveyed said they perceived the NYC housing market as unaffordable, only 16 percent said that their homes were unaffordable when asked to rate the affordability of their own homes against the market.

But can New Yorkers afford to pay those steep rents and mortgages? The study found that New Yorkers earned a higher income than their counterparts across the country with median household incomes for New York renters and homeowners at around $43,000 and $89,000, respectively, compared to the national median incomes of $35,000 for renters and $71,000 for homeowners.

However, they also tend to overspend or struggle to stay within the budget when it comes to owning a home. The report said that 37 percent of the respondents who were homeowners said they went over their initial home budgets while buying a house. Of those who went over their initial budget, 45 percent were millennials, 30 percent Gen Xers, and 19 percent were baby boomers.

“Younger New Yorkers, many of whom came to New York City to take advantage of the career opportunities it offers, are finding a housing market that is expensive, fast-moving and highly competitive,” said Grant Long, Senior Economist at StreetEasy. “But despite facing rising housing costs and budgeting constraints, aspirations of owning a home remain high in the city, particularly among millennials.”

The report found that budget and the number of bedrooms were the most important factors for New Yorkers looking for a home with 88 percent and 79 percent of the respondents respectively citing these as a requirement.

Previous: Top 10 State Capitals to Live in
Next: Will Housing Finance Reform Ever Get Done?