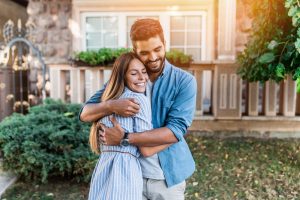 By many metrics, 2021 was the best year on record for the housing market, millions flocked to the market snapping up anything they could afford due to rising prices and rock-bottom interest rates. But one metric in particular, the U.S. homeownership rate, saw its biggest rise in history—1.3% to 65.5%—the highest increase on record and is also the highest the homeownership rate has been since the height of the housing bubble in 2006.

But just because the homeownership rate has risen, does not mean that Americans across the board are getting into houses equally: The National Association of Realtors (NAR) has found through its 2022 Snapshot of Race and Home Buying in America report that Black Americans continue to face “significant obstacles along the path to homeownership.” The current rate specifically for Black homeowners sits at 43.4% (when it sat at 44.2% in 2010), while buyers of other races see higher levels of homeownership namely White Americans (72.1%), Asian Americans (61.7%) and Hispanic Americans (51.1%).

The new study aims to examine homeownership trends by race and location to help explain racial disparities in the housing market. Building off data collected in NAR’s 2021 Profile of Home Buyers and Sellers, this report specifically documented the characteristics of who buys a home, why they purchase a home, what types of homes they purchase, and the financial backgrounds of buyers based on race.

"As the gap in homeownership rates for Black and White Americans has widened, it is important to understand the unique challenges that minority home buyers face," said Jessica Lautz, the NAR VP of Demographics and Behavioral Insights. "Housing affordability and low inventory has made it even more challenging for all buyers to enter into homeownership, but even more so for Black Americans."

Many were pushed out of the market recently due to the combined rise of housing prices and record-low inventory supply. Since the COVID-19 pandemic hit, housing prices have surged about 30% or $80,000 for a typical home. The NAR said that approximately 51% of homes for sale are considered “affordable” to households with less than $100,000 of annual income.

Income varies among racial groups as well: 51% of Asian households earn more than 100,000 annually while only 35% of White households, 25% of Hispanic households, and 20% of Black households met the same income milestone.

"Black households not only spend a bigger portion of their income on rent, but they are also more likely to hold student debt and have higher balances," Lautz added. "This makes it difficult for Black households to save for a down payment and as a result, they often use their 401(k) or retirement savings to enter homeownership."

The study also asked buyers if they witnessed or experienced racial discrimination throughout the buying process. 32% of Black households claimed they faced stricter requirements because of their race, compared to 19% of White respondents, 16% of Hispanic respondents, and 4% of Asian respondents.

While the NAR is instituting a number of programs and initiatives to fight the racial gap, the Department of Housing and Urban Development (HUD) has instituted its own changes.

“Today, homeownership is the principal source of wealth creation for most American households. Unfortunately, NAR’s report confirms that Black Americans are being locked out of homeownership opportunities at an even higher rate than a decade ago,” said Marcia L. Fudge, Secretary of Housing and Urban Development “It is critical that we bridge the racial homeownership gap with intentional solutions that recognize both the persistent history of discrimination and inequity, and the current crisis of housing affordability. We must recognize that Black Americans are more likely to carry student loan debt and have higher balances. Black Americans are also more likely to experience discrimination in the housing market.”

“At HUD, we are meeting this challenge in a number of ways including taking steps to make homeownership more accessible to those with student loan debt; tackling bias in the homebuying process; and making it clear that certain Special Purpose Credit Programs are lawful and are an important tool to help expand access to credit and homeownership for those who have experienced systemic and generational exclusion,” Fudge continued. “The Biden-Harris Administration and HUD will continue to prioritize opening the door to homeownership for families—especially those who have been systemically kept out over generations.”

Under Secretary Fudge, HUD has taken a number of proactive steps to redress the impact of past discriminatory practices and implement new policies to help more families—particularly African Americans—realize the dream of homeownership:

Click here to see the NAR’s 40-page report in its entirety.