A rise in the demand for homes as the homebuying season heats up brings with it another slight uptick in mortgage rates this week, as the latest Freddie Mac Primary Mortgage Market Survey (PMMS) finds the 30-year fixed-rate mortgage (FRM) at 2.97% for the week ending February 25, 2021. This leap in rates marks a 0.16% jump over last week when the average stood at 2.81%. Mortgage rates are currently at their highest point since August 2020, with the biggest one-week move since the outset of the pandemic in March of 2020.

“Optimism continues as the economy slowly regains its footing, thus affecting mortgage rates,” said Sam Khater, Freddie Mac’s Chief Economist. “Though rates continue to rise, they remain near historic lows. However, when combined with demand-fueled rising home prices and low inventory, these rising rates limit how competitive a potential homebuyer can be and how much house they are able to purchase.” 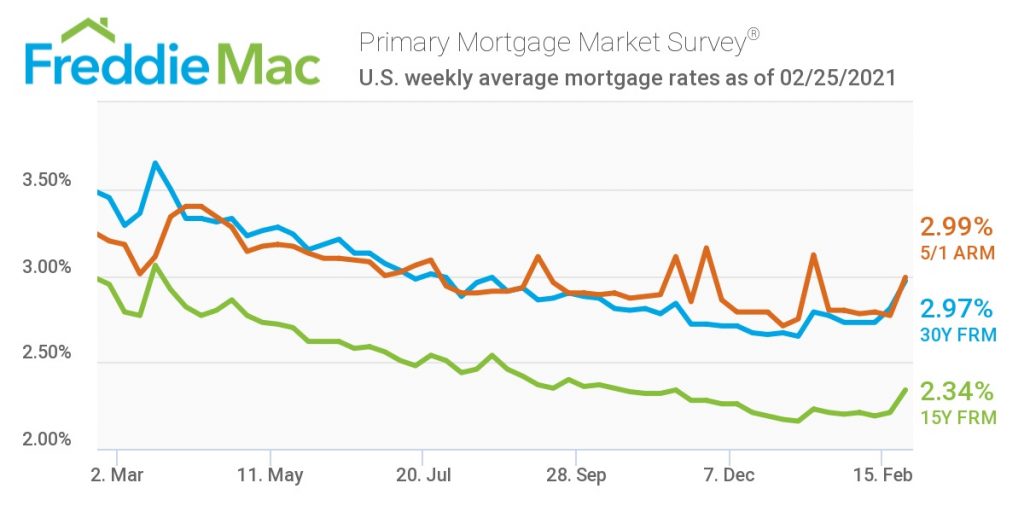 In testimony delivered earlier this week before Congress, Federal Reserve Chairman Jerome Powell noted the impact of housing on the overall economy.

"The housing sector has more than fully recovered from the downturn, while business investment and manufacturing production have also picked up,” said Powell in his Semiannual Monetary Policy Report to Congress. “The overall recovery in economic activity since last spring is due in part to unprecedented fiscal and monetary actions, which have provided essential support to many households, businesses, and communities.”

Despite the recent winter weather that has impacted some markets in the Northeast and in Texas, the U.S. Census Bureau and the U.S. Department of Housing and Urban Development (HUD) announced yesterday that sales of new single-family houses in January 2021 were at a seasonally-adjusted annual rate of 923,000, 4.3% above the revised December 2020 estimate of 885,000.

“The jump in rates came as data show that home sales continue to advance despite the historically low supply of homes for sale,” said realtor.com Chief Economist, Danielle Hale. “Investors also took into account Chair Powell’s latest testimony which emphasized that the current Fed is unlikely to tighten monetary policy solely in response to a stronger labor market, which may stem some of the upward pressure on interest rates in the weeks ahead.