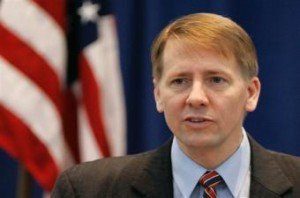 In an upcoming book, inaugural Consumer Financial Protection Bureau (CFPB) Director Richard Cordray discusses his time as Director, from the Bureau’s inception to the current administration.

In an interview with The Columbus Dispatch, Cordray spoke about the book, titled Watchdog: How Protecting Consumers Can Save Our Families, Our Economy, and Our Democracy, detailing why the CFPB was deemed necessary.

“In the leadup to the financial crisis, which occurred almost a decade ago and was the worst economic collapse we had suffered in the United States since the Great Depression, it became understood among people in Washington that there was a hole in the system,” Cordray said. “There was nobody looking out for consumers in the financial marketplace.”

According to American Banker, Cordray also covers his time at CFPB during the beginning of the Trump Administration.

Cordray writes that he believed President Trump was on the verge of forcing him out at the beginning of November 2017.

“I received an unscheduled call from the White House, and a secretary asked me to hold to speak with the president, but then the call was abruptly terminated,” Cordray writes.

The book notes that the agency's response to Wells Fargo’s bogus-accounts scandal in 2016 was a “seminal moment” for the CFPB. Cordray says Wells Fargo's effort to downplay the scandal was "spin" that "was crushed by the facts and by the ensuing public outrage.”

Wells Fargo is currently set to pay $3 billion as part of its settlement with the Securities and Exchange Commission and the Department of Justice after the SEC charged the bank with misleading investors after opening fake accounts. Wells Fargo’s penalties include $500 million to the SEC.

"The Wells Fargo matter is an object lesson in how small risks can balloon into large ones in any profit-making entity if they are not monitored closely," he writes.

Watchdog: How Protecting Consumers Can Save Our Families, Our Economy, and Our Democracy, on The Columbus DIspatch, releases March 2.