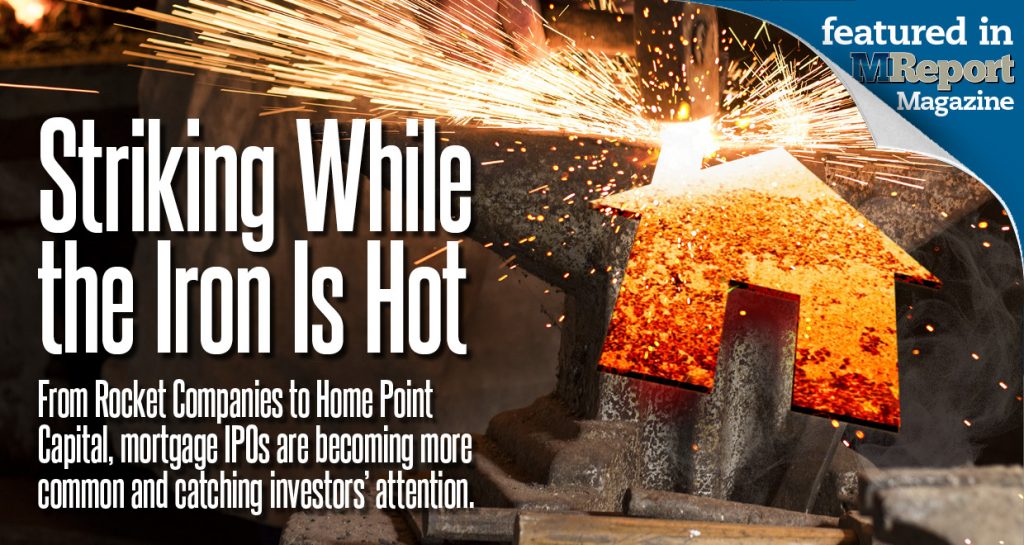 Editor's note: This article appears in the March 2021 issue of MReport, available here.

According to STRATMOR Group, before the end of 2020, equity investors or private companies held an interest in 17 of the top 25 independent mortgage bankers, accounting for more than 40% of the total IMB market.

Existing-home sales closed 2020 on the upswing, reaching their highest level since 2006, according to data from the National Association of Realtors (NAR). Interest rates remained at historic lows, with no indication from the Federal Reserve or the bond market that rates would increase any time soon. Moreover, private individual investors in these companies are reaching ages where they are looking to cash in at least some of their investment, according to mortgage industry experts.

“The M&A deals we’re seeing are game-changers,” said Garth Graham, Senior Partner, STRATMOR Group. “They are record-breaking deals that have investors outside the industry putting money into mortgage banks that are generating solid profits.”

“In years past, we saw strong companies buying weaker counterparts, but this year, we’re seeing strong buying strong,” Graham added. “Buyers are willing to buy at a higher valuation because the entire market benefits from production momentum and because they see a multiple in the value they can add, albeit with stronger technology, better capital markets execution, or consolidation savings.”

“The investors are shrewd,” said David Wood, Partner at Wipfli LLP. “The mortgage market showed how strong it was in 2019 and 2020. The overwhelming desire to tap into that earning stream is why the mortgage IPOs are happening now. You want to sell when the market is high.”

But with the low rates and high demands in today’s market, the supply and demand equation greatly favors lenders, Camerieri said. “There’s a tsunami of opportunity right now. People have lost sight of the cost per loan. Loan margins have increased anywhere from 200 to 400%.”

Camerieri said the difference comes down to the mortgage lenders who count primarily on lending staff to generate, process, and close loans, as opposed to those that more automation.

He added that mortgage lenders should be continuing to invest in technologies that lower the cost per loan. “You need to have resources that aren’t dependent on people.”

“If you depend on human beings, they can just walk away any time that they want and take their book of business with them,” Camerieri said. If the lender instead “has an institutional way” of getting and booking mortgage loans, the cost is lower and the risk of business declining when a top producer(s) leaves is negated.

“The investment community is dying to invest in financial services,” Camerieri said.

COVID has also made some older people more introspective about life, so some older individual owners are more interested in unlocking the capital in their investments, according to Graham.

“They’re closer to retirement age than to the start of their careers,” Graham said. “At some point, they want to take their chips off the table.”

There are several advantages of going public. First and foremost, private owners can unlock capital while still maintaining control of the company. Graham and Camerieri observed that the original owners are still maintaining majority ownership after many of these IPOs, but they have better returns on their money through the IPOs than if they had simply let their investment in the company grow as the company does.

“You can double down and keep money in the retained earnings,” Graham said. “But if the value of the business falls, you can lose that money.”

IPOs provide a company with additional capital to grow further and invest in strengthening the business through more efficient processes.

“A publicly traded company has better access to the capital markets,” Wood added. “When people know the true value of a company, it’s easier to raise capital if you need to.”

A publicly traded company also has better access to the debt markets than private firms, Wood said, adding that with publicly traded shares, stock compensation packages can be used to help retain top executives and other talent.

Rocket Companies., the parent of Quicken Loans and Rocket Mortgage, started the recent trend, raising $1.8 million with the stock debuting at $18 a share in August of 2020.

Guild Holdings, Guild Mortgage’s parent company, followed in October, with the IPO priced at $18 a share.

United Wholesale Mortgage (UWMC) launched January 22 at $11.95 a share, going public via a merger with Gores Holdings IV, a special-purpose acquisition company (SPAC) that created a $925 million infusion resulting in a combined company with a $16.1 billion valuation. SPACs operate by raising funds from investors and seeking out private companies to take public.

UWM is the nation’s second-largest mortgage originator, generating $54 billion in home loans during the third quarter of 2020, outpaced only by Rocket Mortgage.

The most recent mortgage company to go public was Home Point Capital, the parent company of Home Point Financial Corp. It had planned to go public at $13 per share on January 29, but the shares never reached the planned level, trading instead at $11.92 per share.

Despite Home Point’s debut not reaching the planned IPO price, financial analysts cited a plethora of IPOs the first month of the year as the likely culprit, rather than any issue with Home Point itself. An IPO spokesperson said the company couldn’t comment due to the post-IPO quiet period, which ends when the company issues its first quarterly earnings report.

“We are excited to begin the next important chapter in our journey to digitize the residential mortgage industry,” said Jeffrey C. Sprecher, Founder, Chairman, and CEO of Intercontinental Exchange, in a prepared statement at the time of the deal. “Ellie Mae’s industry leadership and best-of-breed technology will better enable us to further accelerate the automation of the mortgage origination workflow, which will benefit stakeholders across the production chain, including consumers.”

Mortgage companies with announced IPO plans at this time include loanDepot, Caliber Home Loans, and Finance of America. They all announced their initial plans last year but haven’t made any further public statements about those potential offerings.

There could be other IPOs in 2021 as well. Graham urges any mortgage lender considering an IPO to strike before today's strong market starts to reverse.

“If the consensus market forecast is reasonably accurate, consumer demand may fall below origination capacity at some point over the next one to two years,” Graham said. “We all learned during 2018 that excess capacity compresses profit margins, resulting in downward pressure on enterprise valuations. So, the timing is right to explore your options if you want your mortgage story to have a happy ending.”

Wood noted that the pricing for the IPO is determined by earnings.

“The more business you can pump through, the better," Wood continued. “The higher the earnings, the higher price you can command for the IPO.” He explained that many companies have driven down their costs by outsourcing compliance and other parts of the business. “The ones that are able to lend more efficiently and derive more revenue are going for higher [IPO] prices.”

Despite the benefits, there are some challenges and disadvantages involved in going public for mortgage companies.

“The periodic filings of 10Qs and 10Ks take require a significant internal effort,” Wood said. “Then you need to deal with the rigors of SOX (Sarbanes Oxley), which is another big challenge.”

Sarbanes Oxley, initially passed in 2002, imposed a number of reporting, accounting, and data-retention requirements for publicly traded companies and some larger private firms.

Public company accounting standards are also more rigorous than those for private companies, according to Wood.

Wood, Camerieri, and Graham all cited the pressures of meeting quarterly earnings expectations, which can cause the stock of a mortgage lender or other company to rise and fall.

Even if a mortgage lender’s stock has had a historically strong performance, the price can suffer if the trend changes, Camerieri added. He pointed to the strong performance of Rocket Mortgage over the last couple of years but noted that it would be difficult for the company to maintain the same pace.

For example, due to the cyclical nature of the mortgage market, Graham noted that a mortgage lender could have a terrible first quarter followed by its best-ever quarter in June, but without any change in the underlying business's strength.

Nevertheless, for those pursuing IPOs and others who may in the future, the advantages outweigh the disadvantages, particularly under current market conditions, experts agreed.

“I would be surprised if mortgage IPOs didn’t continue into this year, Wood said. “The mortgage market is hot. Private investors will never be able to make as much money as they can today. Folks recognize the cyclical nature of the business.”