Bucking a trend that began when the nation was gripped with the COVID-19 pandemic, Redfin has found in a new study that home prices per square foot in cities have risen 16% year-over-year, compared with a 14% increase for single-family homes in greater metro areas and a 4% increase for city condos. This marks the first time since March 2020 that home-price growth in urban areas has surpassed that of suburban and rural areas.

While suburban and rural homes are still hot, housing market data is illustrating renewed interest in urban areas as coronavirus vaccines are administered and a return to normalcy nears. Price growth in urban areas remains near a record high, while rural price growth reached a peak of 17.9% in October and has declined since then. 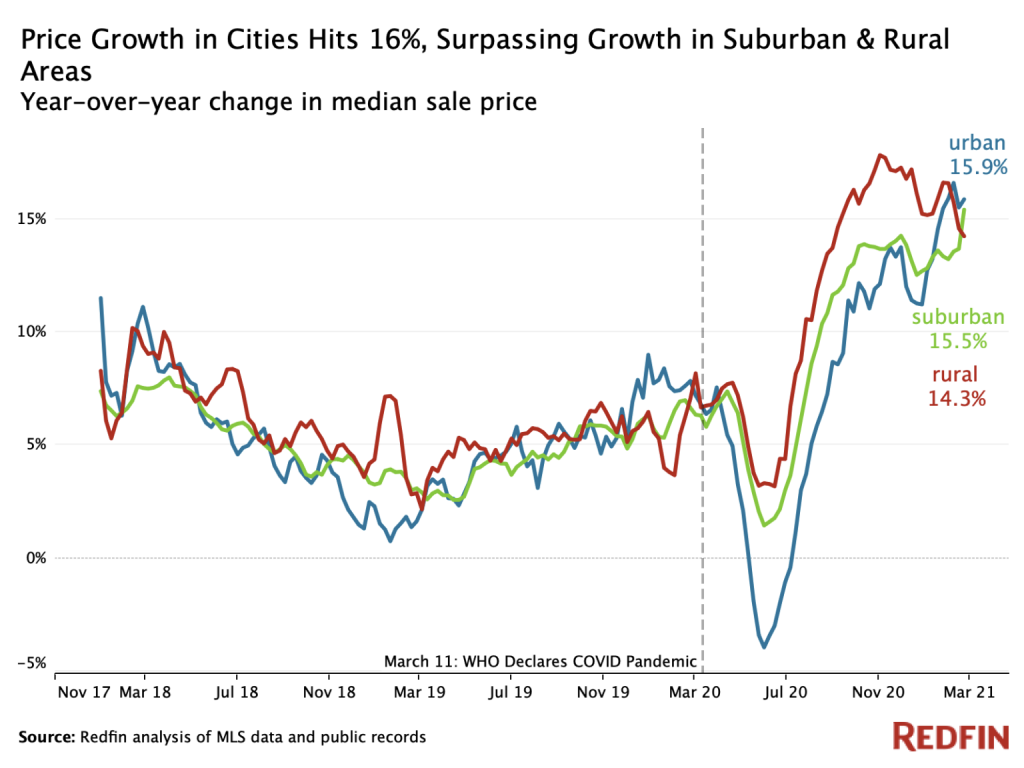 “For all the talk of an urban exodus, the housing market in cities is as hot as we’ve ever seen it, especially for single-family homes,” said Redfin Chief Economist Daryl Fairweather. “There are plenty of buyers out there with deep pockets who are coming out ahead financially during the pandemic. They want a house with lots of space while they are still working from home, but they also want to live in a walkable area near urban amenities as shops and restaurants reopen. Those wealthy buyers are willing to pay high prices to have it all.”

The Baltimore, Detroit, and Cleveland all remain relatively affordable metro areas, and are helping drive national urban price growth. Home prices in urban parts of Baltimore were up 37.8% to $180,938 in the four weeks ending February 21, the highest growth of the 50 largest U.S. metros. Prices in urban Detroit were up 37.7% to $78,990, and they were up 33.4% to $103,875 in Cleveland.

On the other end of the spectrum, urban price growth is slowest in expensive metros. Home prices in urban parts of San Francisco, the only place where urban prices dropped in the four weeks ending February 21, declined 1.4% to roughly $1.3 million. Prices in urban parts of New York rose just 2.2% to $664,350, the smallest growth of any metro, followed by a 5.5% increase to $475,321 in Washington, D.C.’s urban areas. The suburban neighborhoods in all three of those metros are experiencing bigger price growth: 7.1% in San Francisco; 13.5% in New York; and 8.3% in Washington, D.C.

Aiding in this return to urban markets is continued record-low rates, as Freddie Mac reported in its latest Primary Mortgage Market Survey (PMMS), that the 30-year fixed-rate mortgage (FRM) averaged 3.02% for the week ending March 4, 2021. This marks a slight rise over last week’s average of 2.97%, but still below the year-over-year average of 3.29% at the outset of the pandemic.

Low rates and a slight rise in applications as reported by the Mortgage Bankers Association (MBA) are a combination fit for a strong start to the spring homebuying season after a rough stretch of winter weather that impacted the market.

“During the summer and fall, buyers were searching for more indoor and outdoor space, even if it meant moving out past the suburbs. But I think we’ve passed the peak of that trend and people are starting to come back to the city,” said Seattle Redfin agent Bliss Ong. “The hottest areas are residential neighborhoods inside city limits. Buyers aren’t necessarily looking for condos downtown, but some of them are placing a premium on walkability and proximity to shops and restaurants again.”