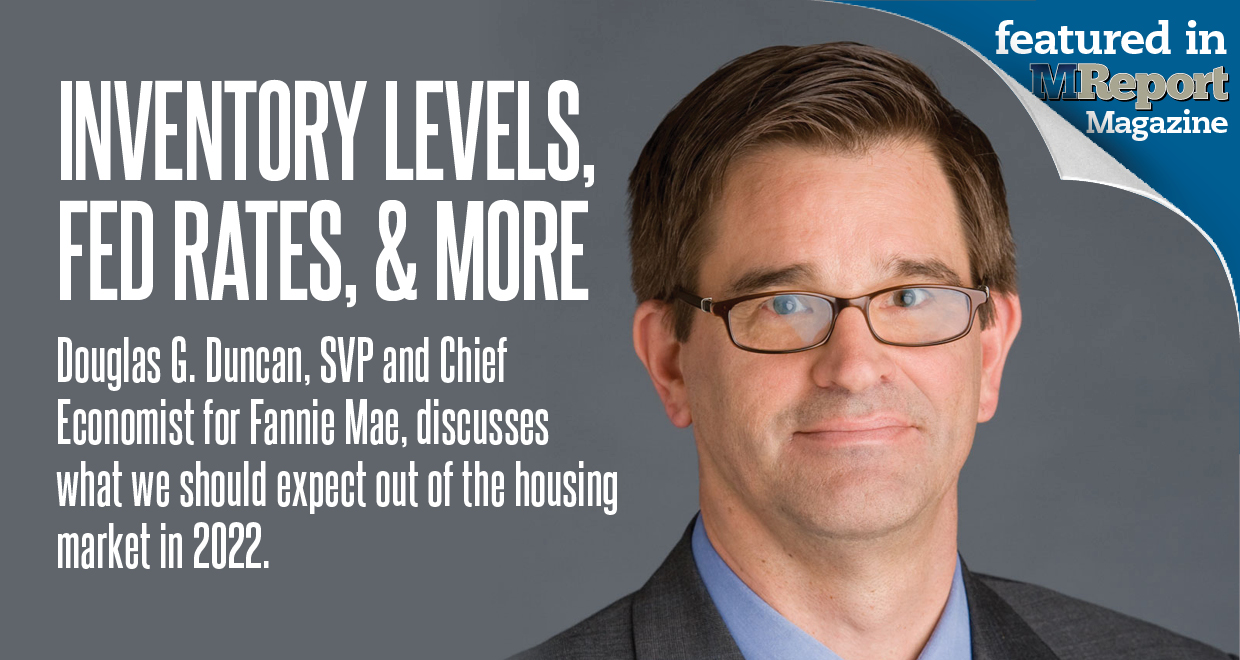 This piece originally appeared in the March 2022 edition of MReport magazine, online now [1].

Fannie Mae’s Douglas G. Duncan oversees strategic research and he is the housing agency’s go-to source for information and analyses on demographics and the economy. His team’s findings are used to help guide Fannie Mae’s business decisions. He recently joined the MReport editorial team for a call to discuss the latest forecasts and findings from his economic team at the GSE.

[EDITOR’S NOTE: This interview was conducted in late January 2022, and Duncan’s comments reflect the state of the economic landscape at that time.]

MReport: What are the high-level trends we should expect from the housing market this year?
Duncan: Each year we pick a theme in January, and then we test that theme across the course of the year to see if we really have a handle on some of the underlying issues in housing and economic growth. This year, our theme is: ‘The Economy and Housing Turning Toward a New Normal.’

It’s not arriving at a new normal, but it’s turning toward a new normal. Fiscal policy is being reversed. It’s been tremendously influential in the last two or three years. At the same time, monetary policy is being reversed. It’s been immensely influential. We also shifted to a remote work environment. Is that a trend that’s going to stick? This has led to geographic movement and prompted people to buy and move sooner than they planned. How are those things going to change? We’re now in a market with a rising rate profile that’s going to shift us from a market dominated by refinancing activity toward a purchase market. Will that be sustained?

We see 2022 as a pretty good year for originations, but refinances are going to fall by half. Purchase [activity] will be up a little bit. Some of that is simply due to price appreciation, although the number of homes sold will be roughly flat.

One important consideration to note is, in our forecast, for the sake of corporate consistency, we impose the forward yield curve from the last business day of the previous month on our modeling of economic activity. One reason we do that is that, in the long run, we feel like the bond market has a better handle on where things are going than any individual economist. A lot has changed since December 30 in terms of the Treasury 10-year note yield and mortgage rates.

We’ll be closely watching the Fed’s press conferences and their announcements. In our model, we have them ending purchases for their portfolio in March, and then immediately implementing a 25-basis-point increase in the Fed funds target, with another 25 basis points in June, and another 25 basis points in December. The bond market has priced anywhere from two to five rate changes.

To some degree, it’s a dynamic process. You could flip a coin as to whether their second move is in May or June. It isn’t that big of an impact—one month difference—but we paused in the fall because we think they’re going to start running off their portfolio in the July time frame. We saw the 10-year yield rise suddenly because the market was surprised by minutes of the Fed’s last meeting that suggested there was a strong discussion about running off their portfolio. That was new information for the market, and it had not been telegraphed, which is why the 10-year yield rose as rapidly and as far as it did. We think they won’t increase rates in the fall because they’re going to want to understand, how many dollars of runoff in the portfolio are equal to how many basis points of tightening. They are going to do both - they’re going to tighten and run the portfolio off. The Fed already did this once in 2018. Our assessment is that during that period they were running the portfolio off and this resulted in a roughly 60 basis point increase in the 10-year yield.

It’ll be interesting to hear how the Fed thinks about the combination of running off their portfolio and raising the Fed funds rate. Obviously, talk about the tapering has resulted in wider spreads because the Fed is not an economic buyer. They are a policy buyer. With them backing out, you will start to see that investors are going to require more yield. So, the secondary spread is widening as we speak. That will probably continue for a while. If you look at long term averages, it’s not going to blow-out.

Now, one thing that helps the Fed is that a 50% drop in refinancing means there will be a lower level of new production to be absorbed by the market.

The other issue they have to consider is that if you look at the structure of the outstanding portfolio from a maturity perspective, they have about $3 trillion dollars of U.S. Treasuries that are going to mature in the next two years. In terms of the share of the mortgage-backed security (MBS) market, there’s not that same share of MBS that’s going to mature. If they want the balance between Treasuries and MBS to stay constant, they’re going to have to signal to the market if they are comfortable letting Treasuries run off faster than MBS.

We also don’t really know what the Fed’s expectations are about long-term growth of the economy. It’s clear that economic activity is slowing. We think 2022 will see about 3% growth, which is still above the long-term growth path of 2.5%. The growth expectations are meaningful because the Fed does not have a great record of being able to fight inflation without bringing on a recession. Of course, that’s their objective—to tamp inflation down—but not bring the economy to a recession. It’s a delicate balance.

One other question to consider is: will we return to some sort of a normal cyclical pattern because COVID has completely disrupted the cyclical patterns of home sales activity? Also, how much more migration will we see from dense to less dense areas? How are businesses going to deal with employees on remote work versus coming back to the office?

MReport: Do you feel we’re heading toward another housing bust?
Duncan: I don’t. Part of the reason for that is demographics. We still have three or four years until we see the peak of demand for first-time homebuying by Millennials. The Boomers are doing what they said they were going to do, which is to age in place, and that is s part of the reason you’re seeing home price appreciation. Typically, first-timers buy existing homes, but there aren’t many available. My favorite anecdote today is that each realtor in the United States has one house to sell.

I certainly don’t think that house prices will see another year of 18% gains. Our forecast has home price gains coming down to about 7% to 8% this year.

A big piece of that is the removal of those stimuli. If we take a look at all of the stimulus and add up what a family of three—two parents and a child—could have received through direct payments, payroll protection, unemployment insurance, they’d have had $11,400 in cash. If they converted that to a 3% down payment, that would be a $380,000 house. So, there’s no question that the stimulus was actually impactful on the purchase side.

You can also see it in underwriting because debt-to-income ratios fell among first-time buyers, and that’s where the credit constraints are usually the most difficult. That’s changing now. Debt-to-income ratios for first-time buyers are starting to rise. Loan-to-values are flattening out. So those indicators are, to us, evidence that the elimination of additional stimulus payments is starting to constrain [buyers].

As long as we don’t get a 50-basis point hike in the next two months, purchase activity in housing will weather the change in Fed policy. A key to this expectation is that there just aren’t existing homes available.

We have 1.8 months of supply, which is historically low. The two other factors I want to point out are that homes-for-sale that have not been started and homes-under-construction that are for sale are at the highest level since 2006–2007. When you look at the number of homes under construction that are sold, it suggests that builders who have been having trouble getting materials are getting through their backlog and now can offer for sale more options for homes they can build.

MReport:  Will rising rates keep some buyers out of the purchase market?
Duncan: While house prices won’t appreciate as much as they did in 2020 and 2021, they’ll still continue to show gains. When you combine increases in house prices with rising interest rates, at the margin, that’s going to take some people out of the market. But is that as much of a constraint as the lack of supply? Probably not.

Cash buyers are a problem.

The cash share of the market is at a high level and it takes a lot of bidding to buy a home. First-time buyers typically are not cash buyers, and there’s still that $2.5 trillion on household balance sheets that’s out there. Some of that’s going to get allocated to housing.

Meanwhile, Boomers have said “We’re going to age in place” and they are doing exactly what they said they would. That is a big contributor to the shortage of homes for sale.

MReport: The latest report from Fannie Mae’s Economic and Strategic Research Group (ESR) predicts that home price appreciation will decline this year from last year. What is driving that outlook?
Duncan: Probably the most important issue is the removal of the stimulus. A lot of those transfers went to people who were prospective first-time homebuyers. Prospective buyers may still have some savings, but there’s no new stimulus coming in the door.

The rise in rates as a result of tighter Fed monetary policy will create an affordability challenge on the other side of the equation which will lead to less competition on the demand side and this may slow home price appreciation.

What I will caution against is making the inference that interest rates have a direct impact on house prices. That is not true.

If you go back to the late ‘70s and early ‘80s, when mortgage rates were 12%–15%, house prices rose because of inflation. The number of houses sold fell significantly. The relationship is interest rates to activity levels.

We also believe that there may be some changes in the ability to work remotely. We think there will be some slowdown in the pace at which people move related to COVID-19. First of all, the waves of COVID seem to be getting less serious from a mortality perspective. And, to the extent that that eases the concerns about living in a densely populated area, you may see some slowdown on the demand side of the housing market.

Meanwhile, businesses are starting to evaluate which jobs offer the ability to work remotely and maintain productivity, or even improve productivity, and which don’t. We think in the course of that evaluation process there’ll be a discussion between labor and management on what’s the appropriate compensation based on the adjustment in productivity that takes place when jobs are done remotely. That is a discussion that will take probably another couple of years, maybe even longer, to work through, but it ultimately will have some impact on housing choices.