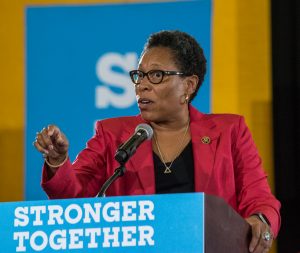 The Senate on Wednesday confirmed President Biden’s nomination of Rep. Marcia L. Fudge as Secretary of the U.S. Department of Housing and Urban Development (HUD), in a 66-34 vote.

The Senate Committee on Banking, Housing, and Urban Affairs last month voted 17-7 in favor of Marcia Fudge's nomination as Secretary of Housing and Urban Development (HUD).

Opponents of Fudge's confirmation included Pat Toomey (R-PA) who said she was one of the least bipartisan members of congress and that she lacks experience in housing policy. Toomey challenged Fudge on past “intemperate” comments about race and party-over-policy disagreements.

“Sometimes I am a little passionate about things,” Fudge told Toomey. “Is my tone pitch perfect all the time? It is not. But I do know this, that I have the ability and the capacity to work with Republicans and I intend to do just that and that is my commitment to you.”

Housing advocates have voiced support for confirmation for the 68-year-old former mayor and congresswoman from Warrensville, Ohio.

"After [Fudge's] nomination hearing, it is clear that she is the ideal candidate to serve as HUD Secretary at this moment in history," Lisa Rice, President and CEO of the National Fair Housing Alliance (NFHA) said [1]. "With over four million instances of housing discrimination each year and increases in housing-related hate crimes over the past several years, we are eager to work with the Biden-Harris Administration and Secretary-designate Fudge to make fair housing a reality for everyone and advance racial equity."

For the Up for Growth foundation, Mike Kingsella noted following the hearing that Fudge is "the person who will have the most impact on President Biden’s housing plan."

Up for Growth [2] applauded Fudge's denunciation, during her hearing, of NIMBY-ism (she said, "We have to get rid of this notion of Not in My Backyard").

Senator Brian Schatz, the Senate Democratic lead on the Yes In My Backyard (YIMBY) Act, during his questioning,  [3]drew a clear line from the redlining practices of the early 20th Century to the widespread use of exclusionary zoning laws today. Fudge said educating Americans on the negative impact of exclusionary zoning could be a role for HUD.

Writes Kingsella: "We view Congresswoman Fudge’s selection as an indication the Biden Administration would use HUD as a vehicle to achieve racial equity and promote economic security and opportunity. These themes were indeed on display Thursday. From lifting Americans out of poverty to providing a pathway to the middle class through better access to homeownership, Congresswoman Fudge affirmed HUD could further her lifelong mission to alleviate poverty and promote racial justice."

Some housing experts hope that HUD, under Fudge's leadership, has the potential to accomplish unprecedented change, making housing a right rather than a privilege, according to Bloomberg's CityLab [4].

"Her first two policy priorities [5] will be undoing rules set during the Trump administration that rolled back fair housing discrimination," Malcom Glenn, a fellow in the Future of Land and Housing program at New America told CityLab. "But simply reinstating these protections are the floor of what is possible."

Glenn tells CityLab that many existential housing-related challenges Black families face did not begin with the pandemic.

"These issues go back quite frankly to Reconstruction, and all of the very intentional efforts on behalf of government entities at all levels to undermine Black families to get access to property. It’s a tall order to expect President Biden [and Fudge] to remedy all of those issues. Just recognizing [the] opportunity to repair some of the damage that was done over the last four years is where I would say he should start.”

Fudge said in prepared statements that her desire is to make the dream of homeownership—and the security and wealth creation that comes with it—a reality for more Americans.

"That will require us to end discriminatory practices in the housing market, and ensure that our fair housing rules are doing what they are supposed to do: opening the door for families, especially families of color who have been systematically kept out in the cold across generations, to buy homes and punch their ticket to the middle class."