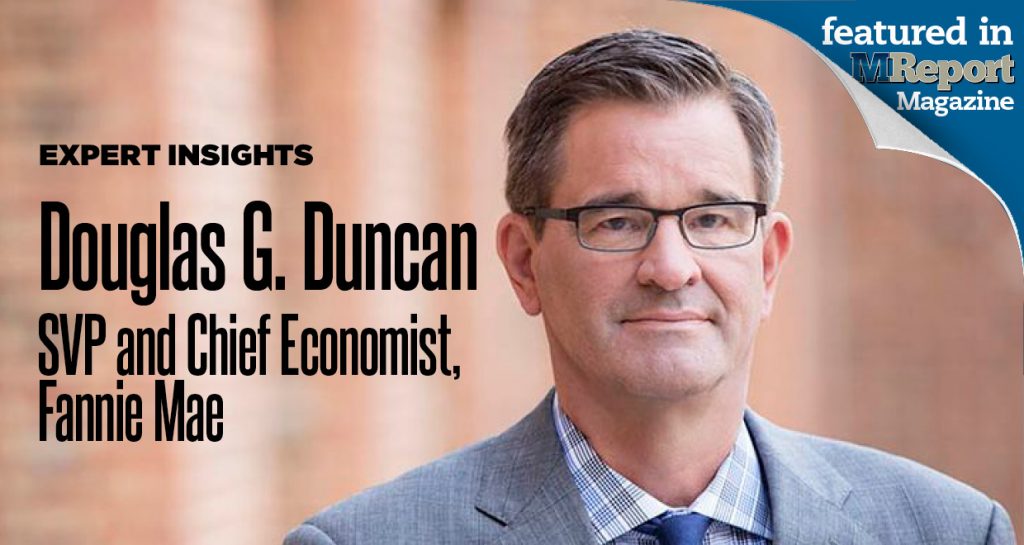 Editor's note: This article appears in the March 2021 issue of MReport, available here.

At Fannie Mae, Douglas G. Duncan is responsible for forecasts and analyses of the economy and the housing and mortgage markets. Duncan also oversees strategic research regarding the potential impact of external factors on the housing industry. He leads the House Price Forecast Working Group reporting to the Finance Committee. Under his leadership, Fannie Mae’s Economic & Strategic Research (ESR) Group won the NABE Outlook Award, presented annually for the most accurate GDP and Treasury note yield forecasts, in both 2015 and 2016—the first recipient in the award's history to capture the honor two years in a row.

Prior to joining Fannie Mae, Duncan was SVP and Chief Economist at the Mortgage Bankers Association. His experience also includes work on the Financial Institutions Project at the U.S. Department of Agriculture and service as a LEGIS Fellow and staff member with the Committee on Banking, Finance, and Urban Affairs for Congressman Bill McCollum in the U.S. House of Representatives. Duncan received his Ph.D. in Agricultural Economics from Texas A&M University and his B.S. and M.S. in Agricultural Economics from North Dakota State University.

Could you give me a high-level summary of what you expect from the housing market in 2021?

Sure, we can do that. The theme for the year is, the economy speeds up and housing downshifts. Which is not to say that we expect housing to decline but rather that we do expect the pace of appreciation to slow. So, we'll end 2021 with stronger housing numbers and stronger purchase mortgage origination numbers—not refinance numbers, though. The economy will pick up faster than it has been, particularly in the second half of the year.

The bottom line is still related to the virus. Last year, it was all about the virus and how that would impact the behaviors of people, businesses, and policymakers, based on what we learned over time about the incidents, severity, and duration of the disease. And then, of course, it's resurgence. This year, it's about the distribution, effectiveness, and resilience of a vaccine. Of course, we've also started to some variations or mutations on that virus around the globe. So, there’s also the question of whether those vaccines are still robust, given the new strains.

Based on current data, setting aside whether or not these mutations of the virus are resistant to the vaccines, it looks like by roughly midyear, the June/July time period, we would get to a place where herd immunity and vaccine distribution would be sufficient to significantly increase or improve attitudes and reduce concerns about the disease. Then, we would see a pickup in economic activity. If that happens (and that's what we have built into our forecast as our base scenario), then during the second half of the year, there's lots of available resources for households to increase consumption. And we think that they will. That second half growth annualized could run north of 6%, which would make the full year about a 5% growth. A lot depends on that vaccine, which is not an economic variable.

We would expect, then, to see some carryover of that activity into 2022. And 2022, we have a forecast of over 3.5% growth. By that time, the economy would be close to back to where it was, maybe even a little better than where it was at the end of 2019, but it still won't be up to what the potential is. So, if there is some inflation, which we do think there may be in the second half of 2022, it’s not likely to be virulent because of the fact that we're not back to long-term trends.

So, what do the housing market and interest rates do in the midst of that? You've seen a little bit of a rise in the 10-year Treasury, which is the base for pricing in the mortgage arena. You haven't seen much movement on headline mortgage rates because the spreads were very wide in 2020 between the mortgage rate and the 10-year Treasury. That represented lots of profitability for mortgage companies. They can give back some of that profitability and allow those spreads to narrow, and we expect them to do that in 2021.

There's still something on the order of two-thirds of households at today's interest rates that have a mortgage that they could improve by more than 50 basis points by refinancing. So, there's still lots of opportunity out there for refinance volume. But we don't think 2021 will be as large in refinancing because so many people already did so in 2020.

That modest rise in Treasury's not pushing mortgage rates up, though. It's still a great time to buy a house, if there's a house available for sale. But, of course, the existing home market is at all-time lows in terms of inventory. Part of the reason that the pace of increase in home sales won't be as fast in 2021 as it was in 2020 is, there's simply not the supply. Now, that could change. If the vaccine makes those existing homeowners who are nervous about selling their house in the presence of this disease more confident, and they started to offer them up for sale, then that could increase sales, simply because then there would be more inventory. And there's plenty of demand out there at these very low interest rates.

Going into 2022, we actually think there might be a little bit of a slowdown in the existing home sales. Interest rates, we think, will top 3% out in 2022. The seller, on 50% of people who have a mortgage, would have an incentive to refinance. Those numbers just seem amazing. But there's lots of reasons people don't actually transact, even though the interest rate itself might look preferable. They're either going to move in a couple years or maybe they paid for 15 years already in the mortgage and they're paying mostly principal. So, what's the point? There's a variety of reasons why people don't actually act on that.

That said, those are a couple of good-looking years. They won't be the record-breaking year that 2020 was for the mortgages because of the huge volume of refinances. But with the economy strengthening, the underlying underpinnings will look good and housing will still do well.

If housing inventories do begin to increase, do you think that we'll see any relief on affordability and availability for first-time homebuyers looking for entry-level homes?

Traditionally, new home prices been higher on average than existing home sale prices. But with less than two month's supply of existing homes available for sale? There's no question price appreciation will continue to grow. And that, of course, is a barrier to entry for lower income households. So, until there's increasing turnover in existing homes, it's going to be a challenge, particularly for lower income, first-time buyers.

Builders have also traditionally not built to that segment because it was the strategy of the buyer of the entry-level existing home to then put in some sweat equity and improve that, make some payments, and then, a few years down the road, sell that, take the equity, and move up, either to a new home or to a better or higher-valued existing home. So, there was this ladder. But new homes typically had a higher average or medium price than existing homes because of that path.

Do you anticipate the trend of more companies allowing remote work to continue, and if so, what impact will that have on housing in terms of trends such as migration?

Well, we've definitely seen migration from the urban core out to the suburbs. We've got data that we could show you from the location of where the application is placed to the property for which it's placed. And we can show you the impact of the virus in some of the major cities on migration, away from density—so, New York, San Francisco, Boston, Chicago, that kind of thing. At least in the near term, that was a driver.

At Fannie Mae, for example, we've been working the entire company remotely since March. In about a three-day period, we went remote and we never went back. There are some downsides to that, so eventually, we will go back, at least to some degree, to the office, as will others. There are benefits in terms of productivity from that. But probably, there will be some permanent shift to more of work being done remotely from home than pre-COVID.

That has housing implications. One is, you can increase commuting distance if you don't have to commute as often. Also, land, typically, is cheaper further out. So that means the cost of housing would be lower. House prices anticipate two incomes. That's a change that took place as women entered the workforce wholeheartedly. The house price increases were partially a reflection of the greater financial strength of a two-income household. So, if you have that, and you're both working remotely, you might need two offices in the house. So, if a home had four bedrooms and you only have one child, now you need a master bedroom for that child and two offices. So, it absorbs that that stock of housing, and some people were worried about whether there would be price decline in that space.

So, there are some impacts that are real and sustained. But I don't believe that the benefits of that override some of the productivity gains that are derived from working in close proximity with your coworkers.