Home >> Daily Dose >> How Much Would Shoppers Pay for ‘Lucky’ Home?

How Much Would Shoppers Pay for ‘Lucky’ Home? 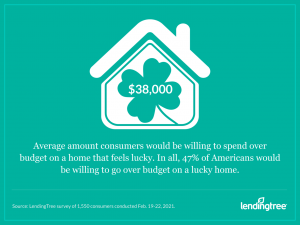 Right in time for St. Patrick's Day, the researchers at LendingTree looked at the role of luck and superstition in homebuying.

Researchers there found that close to half (four in 10) of respondents admitted to "a superstitious explanation" for passing on a home.

Some specific reasons given for superstitious decisions and behavior included: nearly four in 10 buyers chose to not purchase a home near a cemetery, another 32% would skip out on buying a home with an unlucky street number, and 30% wouldn’t buy a house if the previous owners experienced a tragedy, such as death. On the other end of the spectrum, about half of buyers said they would overextend their budget in order to buy a home that, for some idiosyncratic reason, they considered lucky.

On average, survey respondents are willing to go at least $38,000 above their target home price, the study revealed.

Broken down by generation, younger adults are more likely to decide against buying a home because of luck or superstition.

Of Gen Z, 55%, and 50% of millennials, have avoided a particular property due to an uneasy feeling.

Besides that "unlucky street number" the most-cited superstitious reasons for rejecting a home included: "I learned something bad happened in the home (21%) and "I felt bad vibes when inside the home" (21%). Others included: "Unlucky street name" (14%), "unlucky time of year" (12%), "home's structure/layout was poor feng shui" (8%), and/or the home is "too near a cemetery or funeral home" (5%).

Some of the listed reasons might not fully deter homebuyers; rather, some of them would simply anticipate a lower asking price for a potentially cursed property.

For example, while proximity to the dearly departed would deter a section of potential buyers, 61% would live next to a cemetery, but, of that group, nearly a quarter (24%) would expect to buy the house at a discounted price. Some respondents even expected a reduced price for purchasing a home on Elm Street, "a home that may or may not get the occasional visit from Freddy Krueger," quips author Crissinda Ponder. (Albeit, that sort of deal is highly unlikely in today's competitive market.)

Conversely, more than a third (35%) of buyers said they would pay extra for a home whose street number was their lucky number.

Half of those who responded to the survey said they have specific rituals they follow when moving into a new home to cleanse it of bad energy and prepare the property for their family (24% say this totally describes them, while another 26% say it somewhat does).

2021-03-16
Christina Hughes Babb
Previous: Pandemic Spurs Rise in Home Remodeling
Next: Opening Up the Door for Women in Mortgage