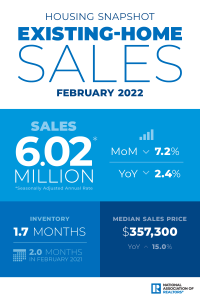 Continuing a pattern of recent rises and declines over the last few months, existing home sales dropped in February 2022 according to the Existing Home Sales Report from the National Association of Realtors (NAR).

The NAR recorded a seasonally adjusted 6.02 million existing home sales in February, sinking 7.2% from January and also down 2.4% year over year. This includes the sale of single-family homes, townhomes, condominiums, and co-ops.

All-in-all, the total inventory of available units at the end of the month totaled 870,000 units, up 2.4% from January, but down 15.5% from one year ago. This results in an unsold inventory sitting at a 1.7-month supply at the current sales pace, up from the record-low supply in January of 1.6 months and down from 2.0 months in February 2021.

The report also found the median sale price of a home during the month to be $357,300, up from $310,600 a year earlier, a 15% increase. This marks 120 consecutive months of year-over-year price increases, the longest-running streak on record.

Breaking down the sales, the NAR found that the first-time buyers made up 29% of all sales. Investors and second-home buyers were 19% of all sales, 25% were cash sales, and 1% were distressed sales. The average time a property remained on the market was also pegged at 18 days, down by 2 days from February 2021.

"Housing affordability continues to be a major challenge, as buyers are getting a double whammy: rising mortgage rates and sustained price increases," said Lawrence Yun, NAR's Chief Economist. "Some who had previously qualified at a 3% mortgage rate are no longer able to buy at the 4% rate.”

"Monthly payments have risen by 28% from one year ago—which interestingly is not a part of the consumer price index—and the market remains swift with multiple offers still being recorded on most properties."

Yun notes that rising rates and escalating prices have prevented many consumers from making a purchase.

"The sharp jump in mortgage rates and increasing inflation is taking a heavy toll on consumers' savings," he said. "However, I expect the pace of price appreciation to slow as demand cools and as supply improves somewhat due to more home construction."

Looking at the four major geographic areas where homes were sold, the South saw the highest portion of homes sold at 46% of the market share, followed by the Midwest which saw 22%, the West saw 20%, while the Northeast saw 12% of sales.

“Existing-home sales declined in February on both a monthly and annual basis. It is tempting to blame the decline on the recent run-up in mortgage rates. However, given that last month’s sales numbers represent closings, the decline in sales came at a time earlier this year when rates were lower,” said Mike Fratantoni, the SVP and Chief Economist for the Mortgage Bankers Association. The more likely reasons for the drop in sales were the ongoing lack of housing inventory and the resulting increase in home values that priced some buyers out of the market. From a lending perspective, while the number of sales declined somewhat, with 15% home-price growth, the dollar volume of sales and purchase originations have increased over the past year.

“The only real good news in the report is the slight increase in the share of sales going to first-time homebuyers. As we have emphasized, the strength of the 2022 housing market is dependent upon the wave of millennial homebuyers reaching peak first-time homebuyer age and finding a way into this booming housing market. We are hopeful that the small increase in inventory and slight slowing of home price growth seen in February will continue through this spring buying season.”

“Existing home sales lost some momentum in February, stepping down from January’s 6.5 million pace. Rising mortgage rates, which neared 4% in February but didn’t breach that threshold until this week, continue to keep homebuyers motivated even in the face of record-low numbers of homes actively for-sale,” Hale commented. “As consumers widely anticipated this week’s Fed rate hike, they had a strong incentive to act quickly on listed homes when submitting new offers and to follow-through on pending deals.”

“While this week’s Fed move was relatively modest, the accompanying statement and projections—collectively referred to as “forward guidance”—signal that the Fed will be taking a much more assertive stance on inflation,” Hale said. “This will be a mixed bag for the many young households at key first-time buying ages, who will face challenges getting a foot into the literal and proverbial homeownership door. Higher mortgage rates will raise costs and likely dampen previously-frenzied demand, but double-digit rent growth also provides a meaningful reason for would-be first-time home buyers to keep shopping.”

“The recent ramp up in new home construction will help add much needed supply to the market,” Hale concluded. “Our expectation is that home sales will remain relatively high throughout 2022, as homebuyers get creative about how to spend their housing budget amid rising prices of competing expenses like energy, food, and childcare, driven up by inflation. So far, buyer activity has been resilient to the extra costs of homeownership, but demand will be tested by an extraordinary year."

To view the data from the NAR in its entirety, click here.