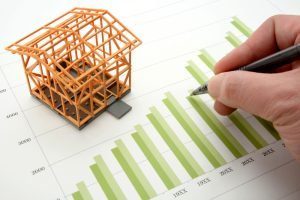 New home sales fell 0.6 percent in February with 618,000 single-family homes sold during the month against the revised January rate of 622,000, according to the latest data on sales of new single-family homes released by the U.S. Census Bureau and the Department of Housing and Urban Development on Friday. On a year-over-year basis though, the sales were 0.5 percent above the estimated 615,000 homes sold in February 2017.

“New home sales slipped in February after January’s data was revised up to be much stronger than first thought.With the revision to January’s data, the past few months have shown strong national new home sales, driven by the West and South,” said Danielle Hale, Chief Economist at Realtor.com.

The median sale price of new homes sold in February stood at $326,800, while the average sale price was $376,700, the Census Bureau data indicated. Additionally, the seasonally-adjusted estimate of new homes for sale at the end of February was 305,000 representing a supply of 5.9 months at the current sales rate.

According to Tendayi Kapfidze, Chief Economist at LendingTree, the strong sales posted in November and December were probably driven by buyers who were rushing in before the tax plan to have their mortgages grandfathered under the old mortgage deduction limits. “The declines we are seeing are a return to the trend prior to the tax cut debate,” Kapfidze said. “Consistent with the impact of the tax plan, high priced homes are back down to 17 percent of sales. In December sales [of homes] above $500,000 were 24 percent of sales, the highest proportion since the sales price breakout began in 2002. This included homes above $750,000 at a high of 7 percent of sales.”

Looking at the market trends in the run-up to the buying season Hale says that there was plenty of room for growth. “More new home sales are needed to restore balance in the housing market between new and existing sales,” Hale said. “It would take roughly 327,000 additional new home sales to get back in line with normal levels given current existing home sales, which would boost new home sales to 15 percent of all sales. Today, one in every 10 homes sold is a new home, whereas in a normal market they account for one in every seven homes sold.”

So how can the supply of new homes get restored? “The reduction in corporate taxes should increase builder profit margins by 10-20 percent,” said Kapfidze. “This could have increased the incentive to build more homes, especially at lower prices where new supply has been lacking due to small profit margins. However, the tariffs that the administration has announced so far target many inputs into home construction including steel, aluminum, and timber. This may place further upward pressure on building costs and thus prices.”