Industry to Adapt, Focus, and Change in 2021 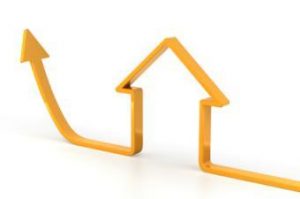 As the industry shakes off the dust of a year like never seen before, the mortgage industry weathered the storm with flying colors, having enjoyed a record year in terms of volume and originations.

Adapting and surviving is nothing new to an industry constantly hit by change on a regular basis. Getting through change and adapting to what lies ahead was the topic of the latest installment in the MReport Webinar Series, entitled “A Look at the Lending Landscape—From Home Equity to Refi Shifts.” Presented by Altisource, the discussion covered a number of topics, ranging from home values, home equity lending, eClosings, shifts from refi to originations, and more.

It’s safe to say that 2020 was a year for the record books, one in which the housing market flourished. Historically-low rates drove both purchase and refi activity, but nothing lasts forever and as Sharga noted in his opening presentation, rates are trickling up past the 3% mark again, as the spread between 30-year mortgage rates and bond yields return to normal patterns.

“As those rates rise, refi volume goes down because the rate dictates refi opportunities and they dry up,” said Sharga. “This is having some implications on the housing market in terms of what economists refer to as ‘rate lock.’ People are reluctant to sell their property because they would be paying more for the new property, plus they would have a higher interest rate in terms of monthly payments. Rate and refi work in tandem. As we saw the rates inch above 3% a few weeks ago, we saw refi volume drop off significantly. I think that’s something that we can expect to see over the course of the next year to 18 months.”

As refi volume tails off, purchase activity remains at an all-time high, as bidding wars are waged for the short supply of homes that are in high demand. As Sharga noted, the U.S. is short two million properties just to get back to normal levels of sale inventory. 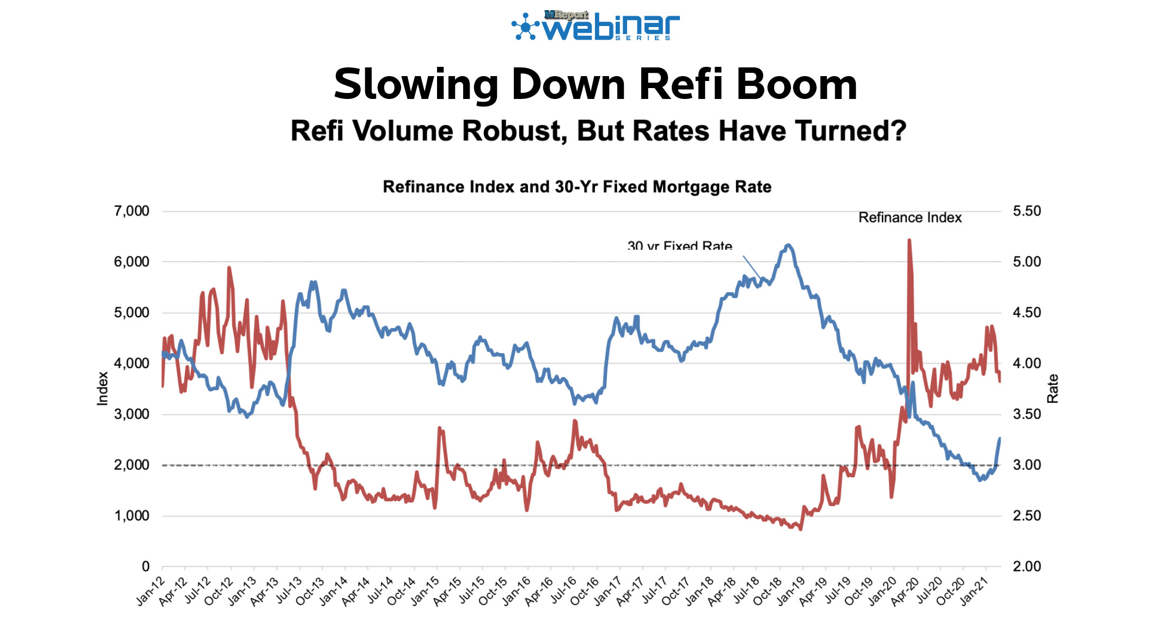 “Demographics is the primary reason,” said Sharga of the spike in demand. “The median age to buy a home is now in the early 30s, and the biggest group of millennials is rapidly approaching that age. Low interest rates improve affordability, and in more than half the markets around the country, it’s more economically efficient to pay a mortgage on a monthly basis than it is to pay rent.”

With the refi market drying up, rates on the rise and tight inventory, the panelists discussed what the industry can do to keep the pipelines full in the event of a major mortgage shakeup. 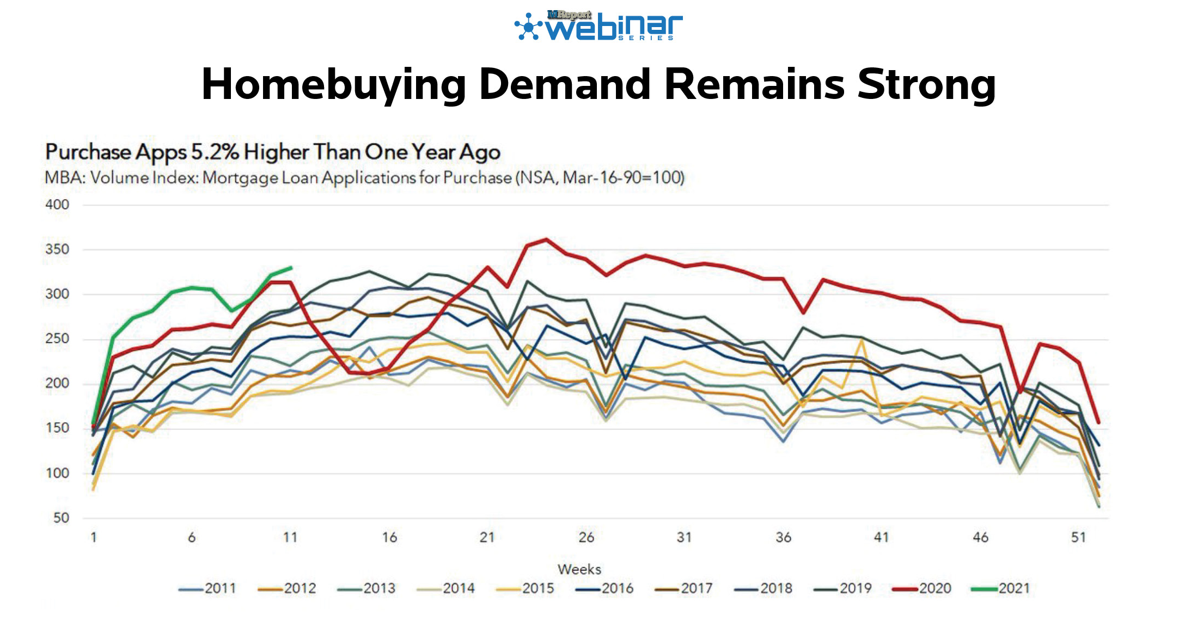 “I think it’s important that originators do a couple of different thing, like expand their reach and their product options,” said Leinan. “When we talk about reach, maybe it’s not your traditional refis falling out of the tree, but maybe its reverse mortgages. Now we need to adapt. The one thing that is constant in our business is change, so now we need to adapt to continue. There may be a significant drop-off this year, but it does not mean that originators can’t do the same things they did last year, they just need to adapt, focus, and change.”

One such change is the expansion of product offerings. Offerings like reverse mortgages, jumbo loans and non-QM loans took a backseat to the traditional 30-year fixed-rate in 2020, but the panelists see diversification as a means to excel in 2021 and beyond.

“Look at the changes the GSEs made with investment properties and second homes,” said DeLory. “There is going to be a need for that with non-QM. There is a need for this product if done the right way. We need to give our partners and brokers something different to set themselves apart. We got a lot of them off the sidelines a year ago when non-QM was here. Hopefully, we can get them back in the game of purchasing their next home. There are good, responsible loans that can be made in that space and with rates going up, it’s the perfect time for non-QM.”

Sharga added, “The reverse mortgage category will grow as Baby Boomers have aged in place, and it’s an underserved market right now populated by companies that borrowers have never heard of. It’s an interesting aspect for some companies to pursue.”

The pandemic may have introduced the concept of social distancing to the world, but in turn, the advent of this new concept forced the industry to adapt change its ways to keep “business as usual.”

“If 2020 taught us anything, our work environment will change forever,” said Wright. “I don’t think we will ever go back to the way things were. There is a big percentage of people who will continue to work remotely permanently or on a part-time basis. I think we have learned that people may be just as efficient in their work day working from home instead of commuting each way to their office.”

Adoption of new technology also fostered the growth of eClosings, as in-person meetings and even property showings became a thing of the past.

“Everything is about ease of use right now, and we want to make it as easy as possible for the borrower,” said DeLory. “I would have loved to offer more eClosings, unfortunately for us at Carrington, most of our business is government loans that requires wet signatures on many of the documents. We are working on evolving with a hybrid model where most of the documents are eSigned.”

Wright added, “I think this last year was the catalyst that a lot of lenders needed to get off on the right foot in terms of eClosings. The number of eClosings has grown since this time last year and continues to grow. Some of the hurdles that were in the way are being knocked down and eliminated. It was not too long ago that we were in a position where investors and warehouse lenders wouldn’t even buy a hybrid eClosing, but we are past that now.”

On the topic of foreclosures, the government has taken ownership in controlling what could have been an issue that spiraled out of control. With many industries impacted by the pandemic sending countless Americans to file for unemployment insurance, keeping a roof over one’s head was a major concern over the past year. Originally slated to end March 31, President Joe Biden announced an extension of the moratorium on home foreclosures for federally-backed mortgages through the end of June.

“Servicers are going to be deluged,” said Sharga. “There are approximately 2.5 Americans currently in forbearance plans. That’s 2.5 million Americans that servicers have to work with. There will be a huge uptick in call volume and servicer activity, even if they are successful in executions on the back end.”

Click here to view a recording of the MReport webinar: “A Look at the Lending Landscape—From Home Equity to Refi Shifts.”

Previous: CFPB: Lenders Must Prepare to Assist Struggling Borrowers
Next: The Week Ahead: Two Keys Shaping the Spring Homebuying Season