Mortgage Lending Best Practices: How the Goalposts Are Shifting 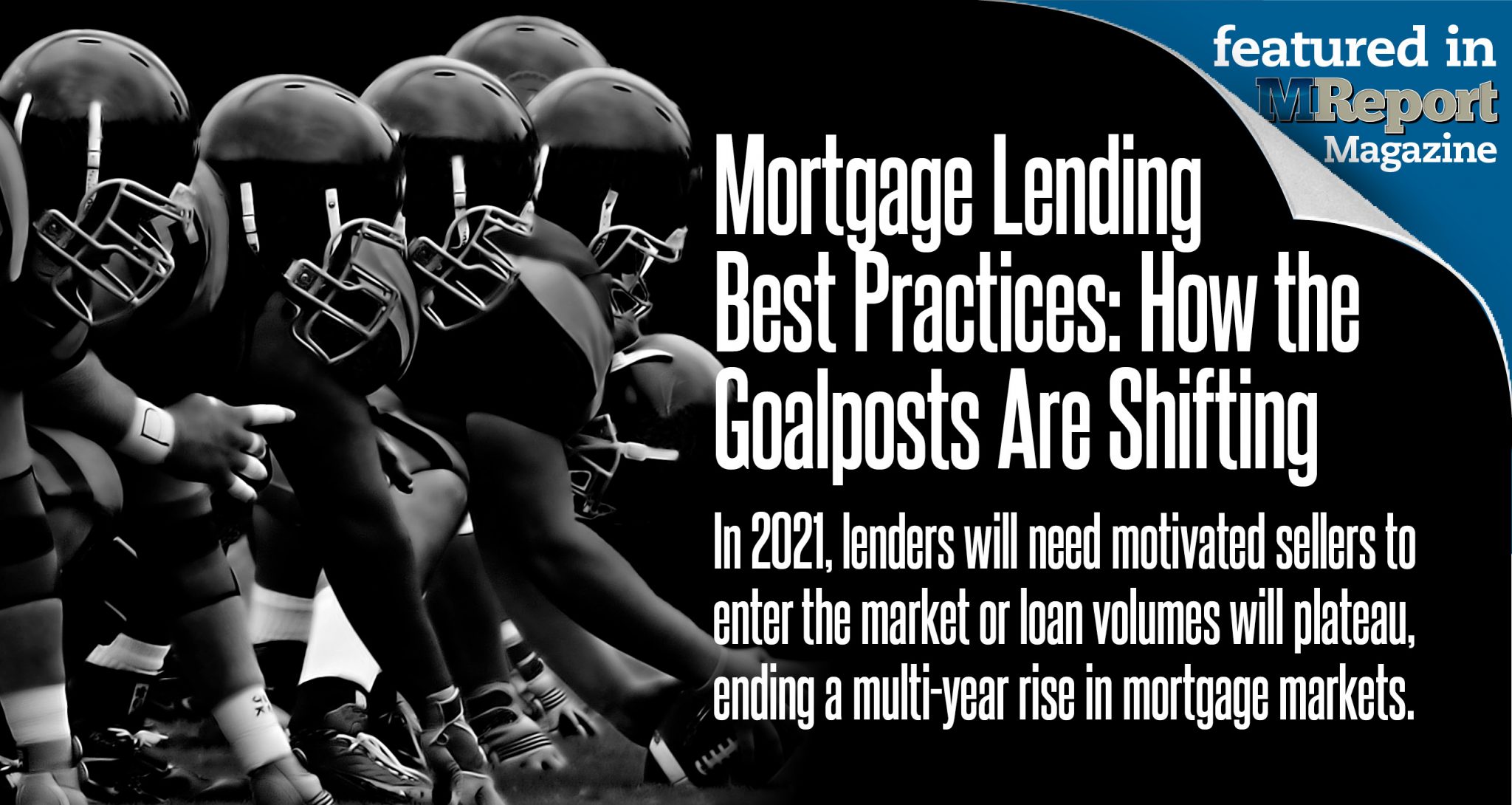 Editor's note: This article appears in the April 2021 edition of MReport, available here.

The COVID-19 pandemic, the recession, and the U.S. presidential election made 2020 an unusual year for the mortgage industry. With interest rates at record lows, refinancing carried the market, but that trend can’t continue forever. The need for inventory is creating an imbalance with housing demand. In 2021, lenders will need motivated sellers to enter the market or loan volumes will plateau, ending a multi-year rise in mortgage markets.

Much of that motivation may come from changes to mortgage lending best practices that were already underway in 2020. Fintech companies are driving an undeniable behavioral shift. The streamlining effect of encouraging institutions and consumers alike to adopt technology is changing the game, making the process more digitized, user-friendly, and efficient.

At the same time, the pandemic has caused the rules of the game to change as well. It has led government entities like the Federal Housing Finance Agency (FHFA) to relax some mortgage origination rules to encourage digitization—for example, by allowing remote online notarization (RON) of mortgage documents.

Together, the shift toward increasing tech adoption and loosening regulations will make the mortgage process faster, easier, and more accessible to more borrowers, giving the mortgage market the boost it needs in 2021. However, the size of that boost will depend on a few factors—most notably, the Biden administration’s housing policies.

Historically, investors have gone to the sidelines when a new president enters office, causing a slight dip in the markets, but stocks actually rallied on Inauguration Day this year. That could be a good sign for the mortgage market.

However, it’s hard to make that prediction with confidence due to uncertainty around the ongoing impact of the pandemic. Depending on how quickly and how widely a COVID-19 vaccine can be administered, companies will make different decisions about how and when to go back to work, which in turn will dictate the stability of major housing markets.

While suburban markets have seen a surge in housing demand during the pandemic, big cities have seen a sharp decline as remote workers move further from their offices. Full vaccination would bring at least some of those workers back to the office, and therefore back to urban areas.

However, the change won’t happen overnight, especially as vaccine programs in many states have seen frustrating delays. It’s also likely that remote work will continue for many people even after it’s safe to work in close quarters again. Both of these factors could drag out the housing market’s rebound and throw more uncertainty about mortgage rates into the mix.

President Joe Biden’s policy choices could influence outcomes, too. The president has signaled that affordable housing policy will be a focus for his administration. In his short time in office, he’s already extended foreclosure and eviction moratoriums and asked the Department of Housing and Urban Development to reinstate a rule about housing discrimination that had been relaxed under the Trump administration. These moves are likely just the beginning of a broader push to increase the nation’s stock of affordable housing, which has seen shortages exacerbated by the pandemic and recession.

There are various ways President Biden could use housing policy to encourage borrowers to enter the market in 2021.

The most important potential policy change could involve changes to mortgages themselves. In 2021, we could see fundamental changes to the structure of mortgage originations, parallel to the changes to small business lending we’ve seen due to the CARES Act. The CARES Act relaxed certain eligibility standards so that small business loans that would usually take months could be underwritten, approved, and funded in a single day. Enabling an equally fast turnaround for new mortgages would deliver a welcome boost to mortgage markets.

The FHFA has already taken the first steps toward this goal by loosening some restrictions on mortgage loan origination. President Biden could accelerate this trend by making the FHFA’s COVID-related policy changes permanent and relaxing other regulations that make it difficult for lenders to streamline their processes with technology, for example, by automating some credit decisioning. By making the mortgage application process faster and easier, these innovations would lower switching costs and empower consumers to shop around with multiple lenders for the best deal, ultimately increasing market transparency and fairness.

Technology could also increase mortgage access in other ways. For example, the Bureau of Labor Statistics (BLS) estimates that over one-third of the U.S. workforce was involved in the gig economy as of 2017. That’s 55 million people whose full income doesn’t appear on pay stubs, and who may struggle to get approved for a mortgage through traditional processes. Lenders can use technology to gain a better understanding of these nontraditional borrowers’ cash flows, for example, by directly ingesting payroll data from gig economy platforms.

Revitalizing Mortgage Markets in the Year Ahead

Last year was unpredictable, and it’s still hard to predict what lies ahead in 2021. While vaccine rollouts continue, we still don’t know when remote workers will be called back to the office, reinvigorating demand for urban real estate. And while the Biden administration has made some moves on housing policy, it’s hard to know at this point which changes the president will prioritize going forward.

If current trends continue, we’ll see lenders continue to streamline mortgage processes with technology to some degree, increasing ease of use, promoting fairness, and bringing more borrowers into the market. The question is whether that trend will be accelerated by relaxed government regulations and widespread vaccination against COVID-19, or hampered by the lack of them.

2021-04-02
Christina Hughes Babb
Previous: Homes Are Selling Faster Than Ever Before
Next: CFPB Braces for Mass Forbearance Exodus

Sipho Simela is the Head of Mortgage Strategy at Ocrolus. Since joining the team in 2019, Simela’s efforts have rapidly expanded Ocrolus’ customer base and optimized the company’s product offering for mortgage lenders. He is a member of the Mortgage Bankers’ Association and an active industry advocate. He is passionate about sharing technology that drives efficiency and provides a competitive advantage to clients and business partners.