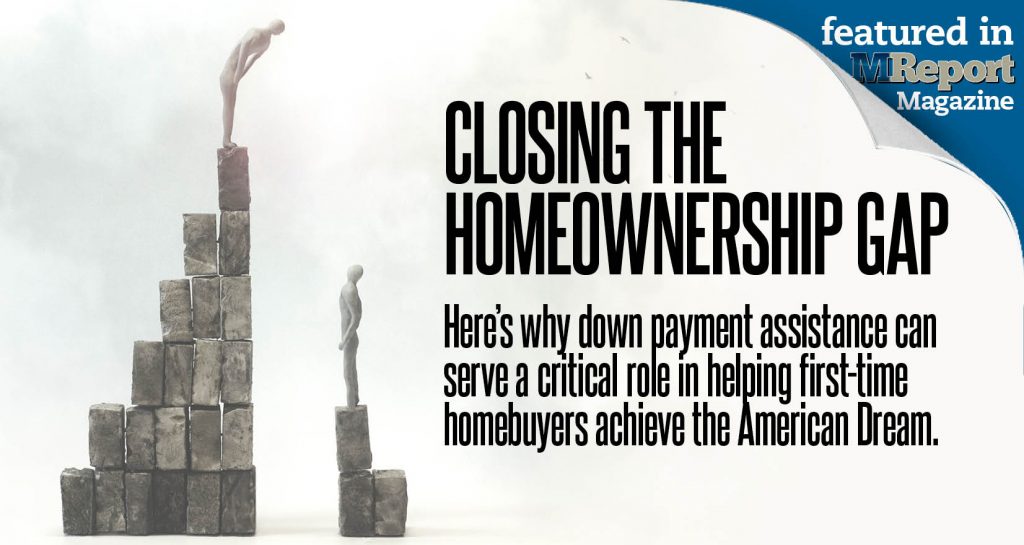 This feature originally appeared in the April issue of MReport.

At first glance, the prospects for first-time homebuyers couldn’t seem brighter. The job market is incredibly strong, and unemployment is at a record low. Mortgage interest rates are already at record lows and maybe heading even lower. The American Dream is surely in reach of anyone willing to work hard enough to achieve it. And yet, it’s not—at least not for everyone. The truth is that some of us are better positioned for homeownership than others.

Largely, the divide between those who are able to get their foot in the door of the housing market and those who cannot is drawn along racial lines. When you throw in rising home prices, record high rents, and increasing student loan debt, the dream of homeownership is actually growing further away for many. At the center of this problem lies one of the biggest impediments to buying a home—coming up with enough money for a down payment. Indeed, the housing gap between different ethnic groups often boils down to a down payment gap, as some have more access to savings and family wealth than others. But there are tools that we as an industry can use to shrink that gap.

Understanding the Down Payment Gap

Even with FHA loans that require a 3.5% down payment, saving up for that payment can be tough. In fact, making a down payment is the single largest obstacle to buying a home, according to a recent nationwide survey of renters by Zillow. The down payment hurdle is particularly hard for younger, low- to mediumincome consumers who recently graduated college and make a decent income, but who still have student loans to pay off.

Yes, it’s true that many loan programs allow borrowers to use gift money from a family member toward their down payments. But some potential buyers are less likely to get help from a relative than others. In particular, racial minorities—and especially African Americans—often miss out on buying a home because their families do not have the ability to contribute funds. Evidence of this fact is both compelling and scary. According to a study by the Urban Institute, the homeownership gap between black and white Americans has grown wider since the Great Recession, from 28.1 percentage points in 2010 to 30.1 percentage points in 2017. That’s the widest gap in 50 years—even wider than it was before the Fair Housing Act was signed into law, when it was actually legal to discriminate against homebuyers based on race.

Obviously, the ability to save enough money for a down payment is tied to how much money a borrower earns. But the study found there is another factor at play. For most Americans, buying a home is the most important step toward generating wealth. Because of past discriminatory lending policies and practices, however, black families are less likely to accumulate wealth through homeownership and pass it on to their children compared to white families. According to the Urban Institute’s study, the wealth gap between black and white householders is another major factor behind the homeownership gap.

While wealth is tied to income, it’s not quite the same thing. Two different households could have the same income, but one may have fewer expenses than the other or could have accumulated assets from inheritances or properties handed down from past generations. For decades, there has been a huge disparity between the wealth of black and white families that continues to this day. For example, according to a February 2020 report from the Brookings Institute, the net wealth of a typical white family in 2016 was $171,000, almost 10 times that of the typical black family’s wealth of $17,150. The wealth gap is even evident among high earners. Among households that ranked in the top 10% by income, white families had a median net worth of $1.8 million compared to $343,160 for black families.

How DPA Helps Close the Gaps

Luckily, there is help available for borrowers who are other wise deemed creditworthy yet are having trouble saving money to clear the down payment hurdle. Currently there are more than 2,500 privately sponsored and government-funded down payment assistance (DPA) programs nationwide, according to the Harvard Joint Center for Housing Studies, which found that 43% of all FHA first-time homebuyers received some type of DPA.

Multiple studies have also found that DPA programs have been especially beneficial for racial and ethnic minority borrowers. In fact, Harvard found that DPA programs were particularly helpful for minorities. The center found that African American borrowers were more likely to get DPA help through either a government program, a community grant, or a second mortgage. In fact, my company, CBC Mortgage Agency, released a nationwide DPA study last year which found that nine out of 10 homebuyers who used DPA would not have been able to buy a home without it.

While DPA programs are incredibly powerful tools for closing the homeownership gap, lately they’ve come under attack. For some, they symbolize the carefree lending that took place prior to the Great Recession, when buyers were allowed to receive down payment help from sellers in exchange for agreeing to a higher sales price. Some equate those practices with any kind of assistance provided to borrowers today—even when the evidence shows today’s carefully underwritten programs are not harmful but actually helpful. Another pervasive myth is the notion that borrowers that receive DPA are higher risks for default.

However, a recently released Harvard study found that DPA programs do not have a substantial impact on defaults. Yet another unfortunate misconception about DPA programs is that many borrowers think they are hard to qualify for. The reality is that there are many different programs for many different borrowers, even programs for those with imperfect credit and low income. Some programs involve loans with deferred payments, while others come in the form of a second loan that the borrower pays down with the first. Indeed, there are some aspects of the homeownership gap and wealth gap between African American and white households that are difficult to explain.

But we do know these gaps exist, and we know that DPA programs have been proven to bridge this gap for many. With them, millions of Americans have been able to move past the down payment obstacle. Providing down payment assistance to people who need it most does much more than help deserving borrowers get into the housing market. It helps them generate wealth as well as financial security and well-being.

Decreasing the wealth gap carries the added benefit of reducing the racial tensions in the nation. That’s why it’s so important that our industry continues advocating for DPA programs and increasing education about them, so that more Americans can take advantage of them and start building wealth through homeownership. Maybe one day there will no longer be a homeownership gap. But until that day comes, supporting DPA programs is the right thing to do.

Richard Ferguson is President of CBC Mortgage Agency, a nationally chartered housing finance agency and a leading source of down payment assistance that helps low-income consumers, often in minority neighborhoods, achieve the dream of homeownership. He can be reached at [email protected]