According to a new report from Redfin, approximately 51% of U.S. homeowners with mortgages have a mortgage rate under 4% — substantially lower than today’s level of 5%.

Mortgage rates have surged as government efforts seek to combat inflation, while the average 30-year fixed mortgage rate hit 5% in April for the first time since 2011, up from a record low of 2.65% in January 2021. That number has helped push the typical homebuyer’s monthly mortgage payment to a record high of $2,288, up 35% from about a year ago.

Many homeowners may be motivated to stay put since rates are now at their highest level in over a decade, as selling their home and buying another could result in losing their historically low mortgage rate and increasing their monthly housing costs. Reports suggest this may also be a contributing factor in the rapid decline in home listings. 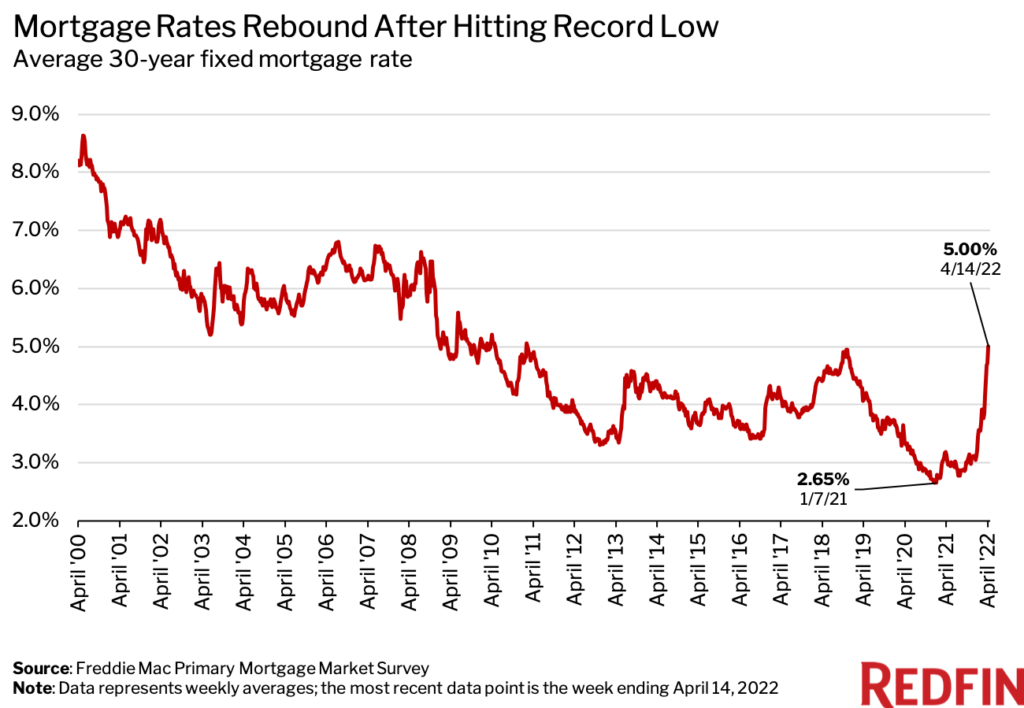 Redfin economists are watching closely to see whether the rise in mortgage rates will significantly impact the nation's housing supply, which already remains at historically low levels. New listings fell 7% year-over-year in April, whereas rates were down just 1% at the end of February, before mortgage rates skyrocketed.

“Higher mortgage rates may already be putting a damper on home listings, but they’re also curbing the insatiable homebuyer demand for those listings,” Redfin Deputy Chief Economist Taylor Marr said. “That slowdown in demand may cause homes to stay on the market longer, in effect giving buyers more options to choose from. Overall, that could mean housing inventory actually gets better, not worse.”

Meanwhile, just 18% of total homeowners in West Virginia had a mortgage rate below 4% — the lowest share in the nation — followed by Mississippi, Louisiana, New Mexico, and Oklahoma. West Virginia also had the lowest share of mortgage holders at a reported 39%, with rates below 4%. Next came New York, Florida, Mississippi, Louisiana, and Oklahoma — all ranging at about 44%.

“Many homeowners haven’t been selling because housing prices have surged so much, they’re worried they won’t be able to find a replacement home,” said Aycock. “The rise in prices has helped homeowners build equity, but often not enough to afford the house they want next, and higher mortgage rates are now making that next home even more unaffordable.”

The slowdown in demand is likely another reason some sellers are choosing not to sell and relocate, as the possibility of no longer being able to get top dollar for their homes and revocation of low mortgage rates persist. With rents on the rise, many homeowners are opting to rent out their properties instead of sell—another way for them to hold onto their low mortgage rates. Americans are also staying in their homes for longer in general; the typical U.S. homeowner in 2021 had spent 13.2 years in their home, up from 10.1 years in 2012.