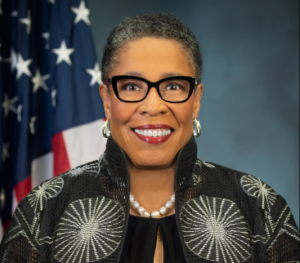 Fudge says that during recent months millions of households have fallen behind on mortgage payments. She says she is happy to report that help is on the way in the form of the Biden-Harris administration’s American Rescue Plan Act of 2021, which addresses several housing-related issues including expanding housing opportunities and reducing the racial wealth gap.

“[The plan] will deliver nearly $10 million to help homeowners avoid foreclosure, and nearly four and a half-billion dollars to help struggling households afford electricity, heat, and other utilities,” Fudge said.

Being new to the role, Fudge is just getting started, but she has announced ambitious plans for ensuing years.

She says creating more housing opportunities is imperative, especially for those who historically have been treated unfairly.

“Owning a home is still the best way to build wealth, yet the reality is that for too many people that dream of buying a home is becoming more and more difficult to attain,” she said. “This is especially true for African Americans. In fact, the homeownership gap between black and white families is wider today than it was in 1960, which banks could still legally discriminate against borrowers based on the color of their skin.”

She goes on to say that the President’s infrastructure plan, which calls for major new investments into our housing sector, is evidence of the administration’s commitment to providing a path to homeownership for more Americans.

It is long past the time for our country to fully realize the promise of fair housing, Fudge said.

“Our department is committed to enacting an agenda rooted in fairness and equity. That means we must have an effective disparate impact to combat housing discrimination.”

Fudge expressed gratitude to the mortgage banking industry, acknowledging that its members "play a vital role in making homeownership possible for millions of Americans.”

Calabria followed Fudge on the virtual stage where he too applauded the industry and government-agency response to COVID-19 and its fallout.

Referring to loan flexibilities, extensions, and other efforts to support borrowers, Calabria said he believes joint actions to keep people in their homes saved lives.

“I hope that's something that we all, not lose sight of in the broader scheme of things,” he added.

Still, he said, COVID is not over. “The full impact on our economy financial system and labor market still remains uncertain. This of course is why we at FHFA are hard at work making sure that our policies continue to respond to these challenges as they evolve.”

He too acknowledged the racial homeownership gap and Fannie and Freddie’s role in creating housing opportunities.

“I was very proud and delighted earlier this year to authorize Fannie and Freddie to contribute $1 billion dollars to the affordable housing trust funds, which is a record amount,” Calabria said.

The FHFA Director touched on the Preferred Stock Purchase Agreement (PSPA), an integral part of Fannie Mae and Freddie Mac's government conservatorship. (By way of the PSPA, Treasury promised to invest in Fannie and Freddie's equity up to very large amounts to minimize the likelihood of the GSEs ever having negative net worth, which effectively has restored market confidence in the enterprises).

He advised listeners to see the PSPA as a line of credit, with accompanying restrictions. “I think it's also worth remembering that the PSPS themselves are not meant to be permanent, these are temporary bridges to getting Fannie and Freddie fully capitalized.”

As for Fannie and Freddie’s government-conservatorship status, Calabria said the FHFA is constantly considering input from the industry as it makes decisions.

“FHFA is continuing to put in place key regulations that support the enterprise's safety and soundness and ability to fulfill their mission, across the economic cycle,” he said. “I encourage [mortgage bankers] to continue to engage with FHFA, provide your market insights to help us inform our work. Through all the changes and continuing challenges of 2021, I remain optimistic about what we can accomplish working together.”

2021-04-20
Christina Hughes Babb
Previous: Lenders Consider Post-Pandemic Return to Office
Next: Why Many Local Homebuyers Are Being Shut Out