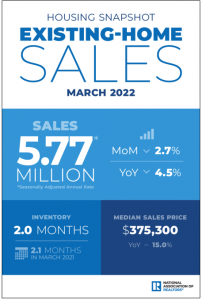 According to the National Association of Realtors (NAR), existing-home sales fell for the second consecutive month in March, to a seasonally adjusted annual rate of 5.77 million, falling 2.7% month-over-month from February, while declining 4.5% year-over-year. NAR defines total existing-home sales as completed transactions that include single-family homes, townhomes, condominiums, and co-ops.

NAR reported that total U.S. housing inventory at the end of March stood at 950,000 units, up 11.8% from February’s totals, but down 9.5% from just one year ago when the nation’s housing supply sat at 1.05 million. Unsold inventory currently sits at a two-month supply at the present sales pace, up from 1.7 months in February, and down from 2.1 months in March 2021.

“The number of home sellers continues to trail what the market has seen in prior years meaning that relatively low numbers of homes for sale remain an obstacle for buyers, even as we move past the seasonal low-point in the number of options for homebuyers,” said Realtor.com Chief Economist Danielle Hale.

The median existing-home price for all housing types in March rose significantly to $375,300, up 15% from March 2021 when the median price was $326,300, as prices rose in each region. This increase marks 121 consecutive months of year-over-year increases.

“And against this backdrop, the typical home sales price continues to rise, up 15% nationwide in March, outstripping even the 40-year high pace of consumer price inflation, which was up 8.5%,” said Hale. “Combined with the rise in mortgage rates over the last year, the cost of financing the typical home sold in March is $395 or roughly 32% higher than this time last year–nearly four times recent overall inflation. Home price growth and the rising cost of financing the home purchase is causing some homebuyers to think twice about whether or not a home is in their budget, especially when inflation is already stretching budgets thin from rising costs on everything from gas to groceries.”

As mortgage rates continue to rise, having recently hit an 11-year high of 5%, more are being shut out of the market, especially first-time buyers who are also feeling the pinch of inflationary pressure. NAR reported that first-time buyers were responsible for 30% of sales in March, up from 29% in February, but down from 32% in March 2021.

"It appears first-time homebuyers are still looking to lock in at current mortgage rates before they inevitably increase," Yun said.