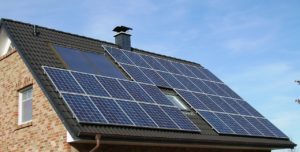 A new report by Zillow shows that homes with solar-energy systems sold for 4.1% more on average than others nationwide in the past year, and more than 80% of home buyers say energy-efficient features are important.

"Energy conservation isn't only good for the environment, it can also translate into big savings on electricity bills as well as help to reduce the strain on the electrical grid," said Sarah Mikhitarian, Senior Economist for Zillow.

Zillow utilizes a figure they call the “Sun Number,” which measures the roof of each home and calculates the pitch, orientation, and size of each roof plane. The Sun Number determines the amount of sun that hits every square meter of the home's roof, taking into account factors like trees or taller buildings that might block sunlight. Finally, it adds in local factors like the cost of electricity and solar, and the local weather conditions, to compute a Sun Number somewhere between 0 and 100. The higher the score, the more suitable for solar that house is.

"The Sun Number provides a starting point for potential energy savings, but speaking with a local expert can help homeowners decide whether it pencils out,” Mikhitarian said. “Homes with solar-energy systems often sell for more than comparable homes without solar power. This premium is largely reflective of the future energy cost savings associated with system."

The National Association of Realtors reported last year in a survey that 71% of its members felt that the promotion of energy efficiency in their listings was either somewhat or very valuable.

Currently, there are enough solar-electricity systems installed in the U.S. to power 12.3 million homes. Zillow is reporting that number is likely to grow as California is requiring all new homes have solar power in 2020.

Previous: Home Sales: The Surge and the Retreat
Next: How a Decade’s Worth of Disasters Impacted Insurance Rates