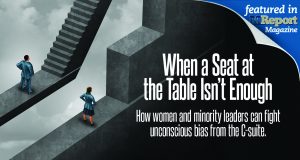 As New York politician Shirley Chisolm once said, “If they don’t get you a seat at the table, bring a folding chair.” Chisolm lived those words. In 1968, she became the first black woman elected to the U.S. Congress and held the seat for seven terms. In 1972, she became the first black candidate for a major party's nomination for President of the United States and the first woman to run for the Democratic Party's presidential nomination.

Great lessons can be learned from Chisolm, especially for female and minority mortgage professionals who are attempting to climb the corporate ladder and into positions of leadership. But once these groups achieve a C-level position or a seat at the management table, the professional challenges do not end.

Women and minorities in positions of leadership often face unconscious bias. Not only can this be difficult for the individual, but it can also make the management team less effective. However, there are ways to combat unconscious bias that have the impact of limiting the personal potential of women as well as of minorities. These strategies are not only effective, but they foster a greater diversity of opinion in organizations, which helps companies perform better. The key is understanding how and why they work and when to use them.

Most people who experience unconscious bias know it when they see it. We asked women about this at Computershare’s inaugural Women4Women Summit, where employees were invited to help inspire, engage, and empower the women of Computershare. Summit attendees were asked if they’d ever experienced unconscious bias in their career. Only 8 percent said no, while 19 percent were unsure. Nearly three-quarters of attendees said yes.

Company meetings are one place in which bias, intentional or unintentional, is often revealed. An example of this would be when one person speaks over or interrupts another person or ignores the other person’s contributions to the discussion.

These are also known as microaggressions, a form of marginalization that is generally defined as a statement or action that is seen as indirect, subtle, or unintentional discrimination against members of a marginalized group, such as women or ethnic minorities. When this happens to you, these behaviors are interpreted as “I am not respected and my ideas are not valued.”

Microaggressions can be challenging to spot. Any one of us can do something unintentionally, however small, that may be interpreted as a slight. At the Women4Women Summit, 75 women were asked whether it was worse to have someone disagree with you or be marginalized. Each one said being marginalized was worse. You don’t have to be female to be on the receiving end of microaggressions. But when we are interrupted or ignored, the feeling is one of not belonging or valued.

Removing bias in the workplace is everyone’s responsibility, especially among a company’s leadership and managers.

One useful strategy for combatting the microaggression in the meeting example is to reconnect with the speaker. The key to this strategy is to be aware of the behavior, and when one person is being ignored, bring the conversation back to the person by saying, “Getting back to what Mary said about …” This has the impact of bringing the discussion back to the individual who was interrupted and allowing the group to discuss the idea further.

When microaggressions repeatedly occur in meetings, some planning ahead can help. Socializing the idea with others ahead of time can make for a smoother group discussion. This helps to ensure you have considered all objections and views before the larger conversation.

The amazing thing about reconnecting back to the speaker and similar strategies is that they work not just in the moment, but over the long term as well. In time, the dynamic of the group will start to change. Other people will start paying attention to new voices and ideas, and a new “norm” is created within the group. All people will feel welcome and included.

Promoting Diversity From Above

Once you have made it to the C-suite or gotten a seat at the table, there are many ways to support the advancement of diversity and inclusion within your organization. One way is to take an active approach to elevate the careers of others by helping them find their next opportunity.

For example, if there is another woman or minority in your office with great leadership potential, you can advocate on his or her behalf, such as offering his or her name and expertise in a particular area. Helping other women and minorities gain visibility to the C-suite is an effective technique. If you find yourself in a leadership role, invite and include diverse team members with potential into your meetings with executives, where they can be seen and heard. If you are unable to attend a meeting, send someone on your behalf to expand their network and knowledge.

Succession planning and identifying high potential, diverse candidates at the management level are other ways to increase diversity and promote more inclusion in leadership roles. One of the best tools for assessing a team is the Nine Box Matrix. The Nine Box is essentially a grid of nine squares that a company’s leaders or managers complete to evaluate a specific level of the organization, typically supervisors or managers. Each candidate is evaluated based on a number of questions. Examples may include: Are they excelling in their career? Is there anything they need to learn? Do they have high potential to take the next level position? Are they struggling?

The key to doing the Nine Box relies on all managers performing this evaluation regularly, perhaps quarterly or semi-annually. In a large organization, the Nine Box exercise provides visibility to those being assessed. For example, let’s say Mary is a supervisor. Some managers may know who Mary is and will see her in the hallway, but they don’t truly know her, her performance, or her potential. As a result, if she is a prospective candidate, other managers may not know enough about her to recommend promoting her.

In a company that regularly uses the Nine Box Matrix, however, all the managers will know who Mary is, what she can do and what she is capable of doing. The Nine Box tool ensures that women and minority supervisors receive equal exposure to and attention from managers, so they are better known to hiring managers. Essentially, the Nine Box Matrix helps create a culture of proactive cross-pollination, which results in a more level playing field, a more valuable workforce, and a stronger management team.

The Importance of Seizing Initiative

As Shirley Chisolm taught us, women and minorities who desire to lead must take action. People with great leadership potential cannot wait around for someone to notice them. If you aspire to be a leader, you need to the opportunity to lead when you can.

One of the best ways to do this is by leading meetings. If a meeting needs to be held, be the one to schedule it, and then run it like a pro. If this idea sounds intimidating, one strategy that can help is reaching out to other managers before a meeting to discuss the issues they're concerned with and what their thoughts are on the topic. Once you've made these connections ahead of time, it can make it much easier to run meetings as well as ensure everyone with a voice at the table is heard.

One of the biggest challenges with running any meeting is sticking to the agenda and keeping everyone on task. If someone starts to take the discussion off topic, one valuable tactic is to acknowledge that what they are saying is valid, but say, “let’s make sure to address that during our next meeting.” You have to be assertive to do this, but you will generally find that most people in the meeting appreciate your effort to keep things focused.

Women and minorities continue to face challenges even as they ascend the corporate ladder. But anyone who wants to be a successful leader must be persistent and willing to take chances. Hockey great Wayne Gretzky once said, “you miss 100 percent of the shots you never take.” I cannot emphasize enough how important it is to keep taking shots and to encourage your colleagues to do the same. You, your career, and your organization will be so much better for it.