The National Association of Home Builders’ (NAHB) 55-Plus Single-Family Housing Market Index (HMI) hit its highest level since its inception in 2008, rising six points to 72 in Q1 2019.

The HMI measures two segments of the 55-plus housing market: single-family homes and multifamily condominiums. Each segment of the 55-plus HMI measures builder sentiment based on a survey that asks if current sales, prospective buyer traffic and anticipated six-month sales for that market are good, fair, or poor.

According to the report, present sales increased to 76, expected sales for the next six months grew to 77, and traffic of prospective buyers increased eight points to 61.

“Favorable demographics and lower mortgage rates have helped to increase demand in the 55-plus housing market,” the report stated. “However, it is important to note that supply-side challenges, such as regulatory, land acquisition, and construction costs, continue to temper growth.”

This report comes on the heels of Freddie Mac reporting that mortgage rates dipped to 4.14%, and projected to be a quarter to half a percent lower than they were last year.

According to Freddie Mac’s report, 30-year fixed-rate mortgages dropped 0.41% year-over-year, and fell 0.06% from last week’s 4.20%. This was the first reported decrease in nearly a month.

Long-term mortgage rates have been brought down to around 4%, partly due to the Fed’s decision to hold off on further rate hikes for now. Before the Fed’s decision, realtor.com’s data suggested an increase in upward momentum spurred by continued economic growth and monetary policy tightening.

Federal Reserve announced Wednesday that it will be keeping the federal funds rate at 2.25% to 2.50%. 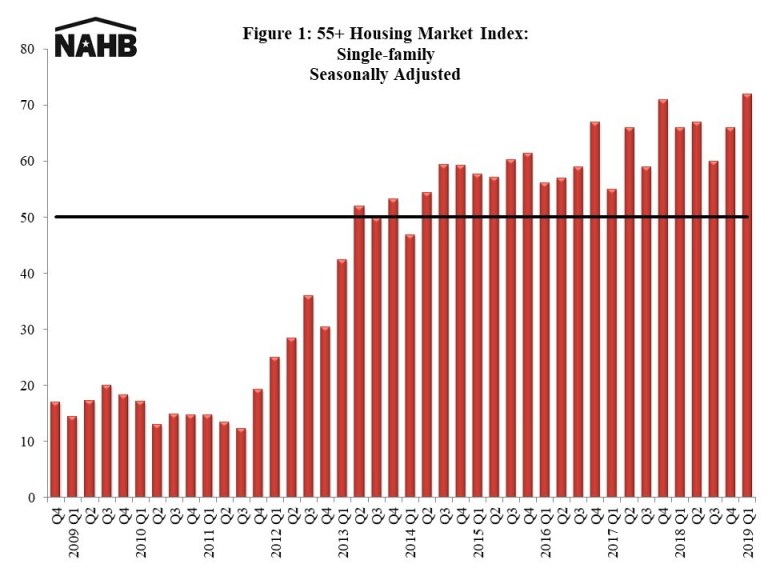