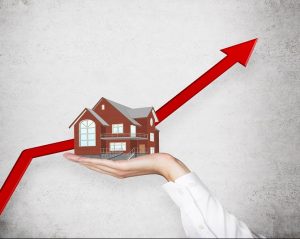 A hand is holding a house. A huge red arrows rocketing as concept of rising real estate market.

Time and time again, proverbs across time and cultures tell a tale of a protagonist who refused to get with the times by refusing to accept modern ways of doing business or new technologies. But, according to Fannie Mae’s Economic & Strategic Research Group (ESR) appraisal modernization could affect your profits depending on the speed at which it is adopted.

Continuing a quarterly survey of mortgage executives that initially started in 2014, Fannie Mae has published its latest Mortgage Lender Sentiment Survey for the first quarter of 2022 finding that lenders see considerable value in modernization.

The survey, which was conducted during the first two weeks of February polling 200 senior executives, intends to assess their views and outlooks across varied dimensions of the mortgage market. The 200 executives represent 188 institutions of which 83 were non-depository mortgage banks, 62 depository institutions, and 40 Credit unions.

As a whole, the survey revealed that nearly all lenders surveyed believe that appraisal modernization is valuable to the mortgage industry and that Collateral Underwriter (CU) and other third-party tools have been helpful in managing collateral risk. Lenders identified inspection-based appraisal waivers and non-traditional appraisals (desktop appraisals or hybrid appraisals) as the most beneficial areas to adopt.

As a whole, 94% of respondents say modernization is valuable, while 61% say it is “very valuable.”

32% say inspection-based appraisal waivers are the most important adoption when considering speed, then integration with LOS (loan origination systems). 30% say non-traditional appraisals (such as desktop appraisals or hybrid appraisals) are the key to speeding up the process.

The biggest reported benefit to modernization was shortening the loan origination time, but even then, that is hampered by the lack of industry-wide adoption. 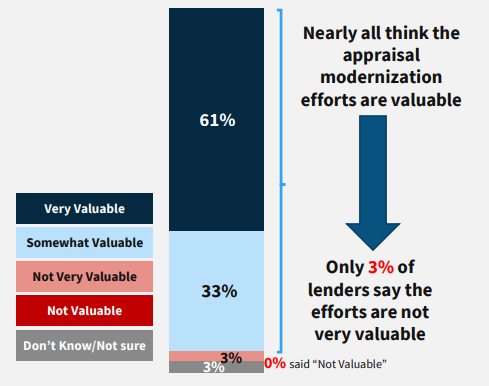 “Appraisal costs and turn-around times have gone up considerably while UCDP valuation feedback has declined,” one anonymous appraiser was quoted as saying. “This points to inefficiency that needs to be addressed. AUD feedback should allow for more appraisal waivers and AVM valuation instead of full appraisals.”

Another was quoted as saying, ““Currently, the appraisal process is the biggest issue facing the mortgage industry. It causes significant delays, higher costs (due to involvement of AMCs, and there are fewer experienced practitioners that understand more complex collateral assignments).”

Those against modernization in the survey cited different standards from municipality-to-municipality and increased fraud as reasons against it.

But by far, the largest amount (59%) of respondents modernized to shorten the loan cycle time in appraisal modernization.

Previous: Percentage of Underwater Homes Increase in More Than Half the U.S.
Next: The Cost of Quality