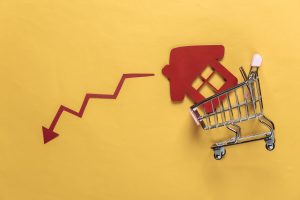 The Mortgage Bankers Association (MBA) reports that this week, mortgage applications decreased 1.2% from one week earlier, according to its latest Weekly Mortgage Applications Survey.

And while mortgage rates slipped slightly last week to 5.25%, according to Freddie Mac’s Primary Mortgage Market Survey (PMMS), affordability and inflationary concerns continue to hover like a dark cloud over homebuyer market.

As a result, the refinance share of mortgage activity decreased slightly to 32.3% of total applications from 33% the previous week.

“Most refinance borrowers continue to remain on the sidelines as a result, and refinance applications have fallen in nine of the past 10 weeks. Compared to January 2022, refinance activity is down 66%,” said Joel Kan, MBA’s Associate VP of Economic and Industry Forecasting. “Higher mortgage rates are also impacting purchase market conditions, as the purchase index remained close to lows last seen in the spring of 2020 when a significant portion of activity was put on hold due to the onset of the pandemic. Currently, higher rates, low inventory, and high prices are keeping prospective buyers out of the market.”

Also impacted this week due to the instability in rates were adjustable-rate mortgages (ARMs), as the share of ARM activity decreased to just 9.4% of total applications.

Despite the fact have reached as high as 5.30% and have been in a state of fluctuation, the housing market remains as competitive as ever, as buyer demand has been strong enough to keep the market afloat despite the spike in mortgage rates.

According to the latest Zillow Real Estate Market Report, year-over-year home value growth set a record for the 13th consecutive month in April, as the typical U.S. home is now worth $344,141, which is 20.9% higher than a year ago. That record pace of growth comes despite rising mortgage rates cutting into the budgets of prospective buyers nationwide.