Prices Leaving More ‘Unable or Unwilling’ to Buy a Home 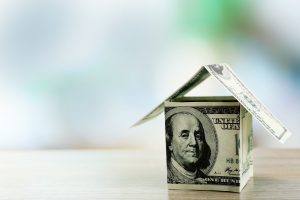 Regionally, Tampa, Florida; Phoenix, Arizona; and Miami, Florida reported the highest year-over-year gains among the 20 cities in March, with Tampa leading the way with a 34.8% year-over-year price increase, followed by Phoenix with a 32.4% increase, and Miami with a 32.0% increase. Seventeen of the 20 cities reported higher price increases in the year ending March 2022 versus the year ending February 2022.

"Those of us who have been anticipating a deceleration in the growth rate of U.S. home prices will have to wait at least a month longer," said Craig J. Lazzara, Managing Director at S&P DJI. "The National Composite Index recorded a gain of 20.6% for the 12 months ended March 2022; the 10- and 20-City Composites rose 19.5% and 21.2%, respectively. For both National and 20-City Composites, March's reading was the highest year-over-year price change in more than 35 years of data, with the 10-City growth rate at the 99th percentile of its own history.” 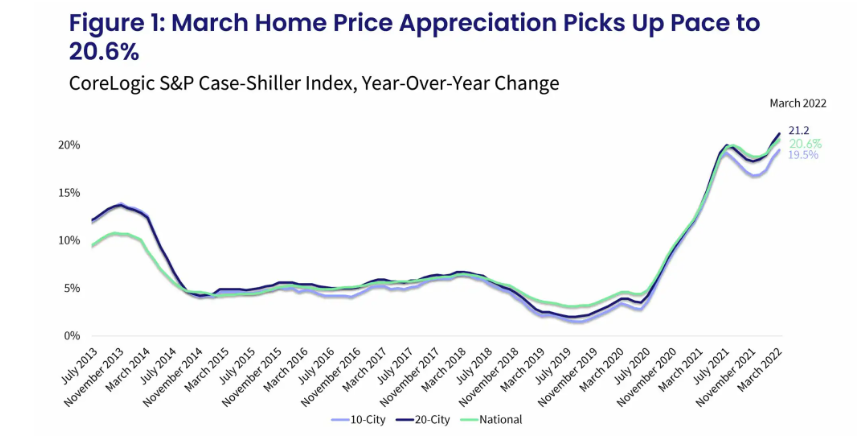 “After 32 months of logging the strongest home price gains, Phoenix's price growth slowed considerably more than the other metro regions and is now outpaced by Tampa, Florida,” said CoreLogic Deputy Chief Economist Selma Hepp. “Nevertheless, the first quarter of 2022 was marked by some of the most competitive housing market conditions since the onset of the pandemic. Homebuyer frenzy reached another new high as eager buyers pursued last-ditch efforts to secure a home purchase before the mortgage rate surge.”

This week, Freddie Mac reported mortgage rates continuing to slide, dipping to 5.10% after hitting a high of 5.30% earlier in May.

"Mortgages are becoming more expensive as the Federal Reserve has begun to ratchet up interest rates, suggesting that the macroeconomic environment may not support extraordinary home price growth for much longer,” added Lazzara. “Although one can safely predict that price gains will begin to decelerate, the timing of the deceleration is a more difficult call."

“Meanwhile, mortgage rates have steadied, but remain near the highest levels in 13-years,” noted Danielle Hale, Chief Economist for Realtor.com. “But importantly, sales data for both new homes and existing homes signal that buyers are increasingly unable or unwilling to make a home purchase under these conditions. As buyer confidence sags and weighs down demand, real estate markets will re-balance, eventually tilting away from the heavy advantage that recent home sellers have enjoyed. This will initially mean fewer home sales, which should diminish the bidding wars and concessions that buyers make to sweeten offers.” 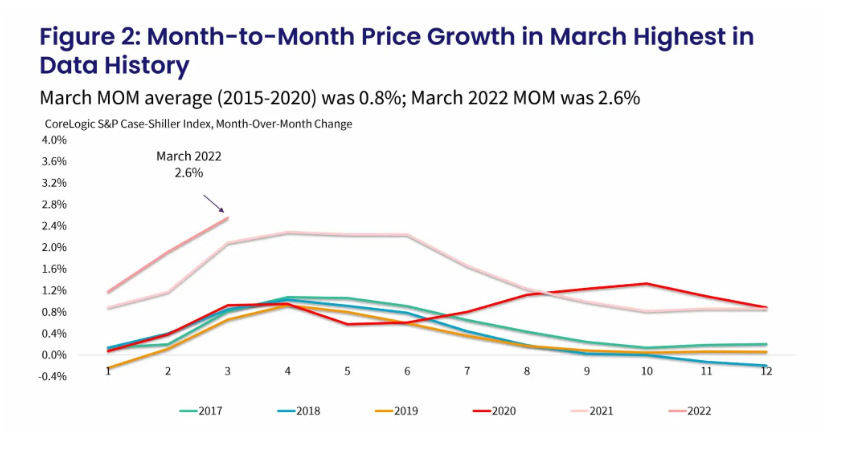 The latest data from the U.S. Census Bureau and the U.S. Department of Housing & Urban Development (HUD) for the month of April 2022 found the nation’s new residential sales dropped 16.6% month-over-month, while the National Association of Realtors (NAR) reported existing-home sales in April sliding for the third consecutive month to a seasonally adjusted annual rate of 5.61 million, as sales were down 2.4% from March 2022, and down 5.9% year-over-year.

“Eventually, we expect a more moderate pace of listing price growth, with for-sale homes that sit for longer than the record pace we’ve seen in recent months,” said Hale. “Somewhat counterintuitively, conditions shifting back in buyers’ favor will likely benefit many of today’s sellers, nearly three-quarters of whom also plan to buy a home this year. While fundamental homebuying demand is expected to remain high thanks to large numbers of young households, mortgage payments still have to be manageable. Mortgage costs are nearly 50% higher today than they were at this time last year. Unless incomes grow by double-digits or mortgage rates dip, neither of which seems especially likely, households will have to look for other options.”