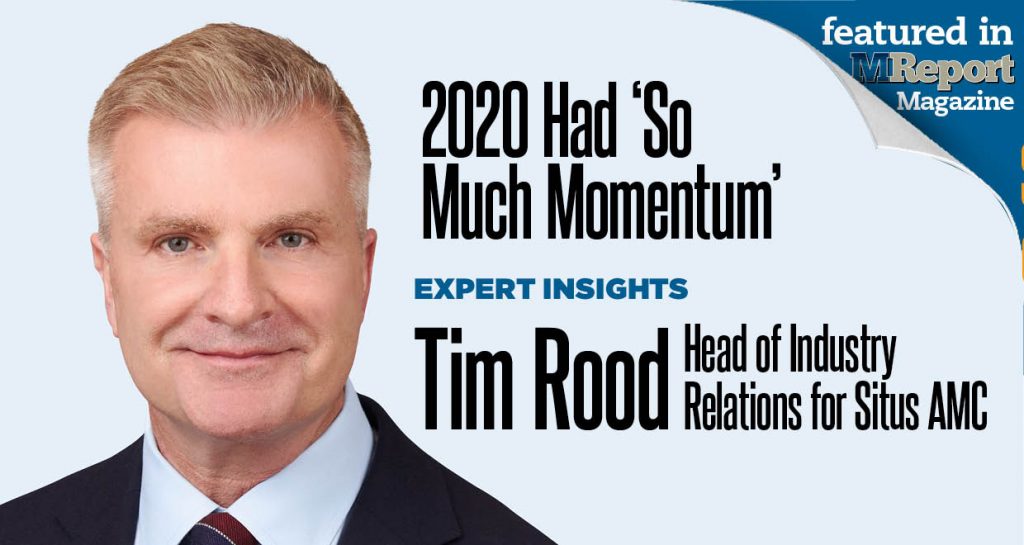 This feature originally appeared in the June issue of MReport.

Tim Rood is the Head of Industry Relations for Situs AMC was also CoFounder & Chairman of The Collingwood Group, which was acquired by SitusAMC. Rood has over two decades of mortgage industry and entrepreneurial experience. He advises organizations to optimize the business opportunities and to mitigate and manage the risks in and around Washington, D.C. Rood is a regular contributor to various national media outlets including CNBC, Bloomberg Television, the Washington Post, The New York Times, and The Wall Street Journal.

Rood recently spoke with MReport on affordability and what the Fed is doing to make sure interest rates remain low during this crisis.

Why have homeowners been skeptical to step into the market despite near-record low mortgage rates?

We came into the year, 2020, with so much momentum. You saw new-home sales, existing home sales, at 12-year highs. You saw homebuilder activity starting at 20-year highs. Everything was coming in really hot. As soon as we hit March and we started to see the impact of COVID-19, we did see the market drop off.

We are down about 40% from the beginning of the year. You are starting to see a pickup, but the thing is right now we still have incredible affordability. You’re looking at interest rates that are a percent below where they were last year and the demographic tailwind of this market is unavailable. You won’t see the bottom drop out of the housing market, but you’ll certainly see demand wane.

Do you feel homebuyers will delay purchases into the fall?

Statistically speaking, if you think about the market, who would be in demand for a new home, it certainly is not going to be one of the 26 million who are unemployed, or one of the 4.5 million who have requested forbearance, or the 12 million renters who have stopped paying their payments. That takes a lot out of the system. However, you are going to see that as clouds start to lift, hopefully by the fall, you’re going to see people who are going to be reevaluating their choices, particularly in the rental space. You’re going to see people leaving the urban centers, looking to the suburbs, the exurbs, getting a little more space.

There will be less of an emphasis on commuting to work as you can rely on Zoom, the internet, and conference calls to do most of your work. So, it’ll assist the housing market in that sense. You’re certainly not going to see interest rates go up in this environment. We can’t have them go up. The Fed is doing everything they can to make sure that they don’t.

You don’t expect home prices going to increase in value too much, nor are they going to drop off. They tend to be resilient, even in recessions, but obviously, because of the lack of demand you’re going to see price appreciation that will flatten out, so it’ll be pretty affordable.