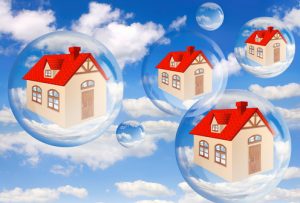 As the market continues to hit record marks nearly unabated over the last few months, the topic of bubbles is being brought up around watercoolers and coffee machines across the country. But still, on the local level, properties are being snapped up record time and for record prices even in the face of multiple external forces.

To address this question, Zillow polled a panel of academics, economists, and other housing experts in their quarterly Zillow Home Price Expectations Survey asking about their thoughts on the market including future growth, inflation forecasts, and recession risks.

As a whole, 60% said they do not believe the U.S. housing market is currently in a bubble, compared to 32% who think we are in a bubble, and 8% who are not sure.

"Americans have seen home values rise at record rates over the past few years. But although a recession is looking more and more likely, the housing market today is a far different beast than what we saw in the mid-2000s," said Nicole Bachaud, an Economist for Zillow. "Unlike in 2006, this market is underpinned by strong fundamentals and has been built on mortgages with sound credit, factors that won't change in the near term."

The polled experts most popular reason cited rebuking any bubble rumors were strong underlying market fundamentals, scarce inventory, and continually shifting housing preferences due to the pandemic. This reason was followed by the fact that mortgages face more stringent requirements during underwriting leading to a low credit risk.

Among those who do believe we're in a bubble, unaffordable prices in the absence of record-low mortgage rates is the chief rationale. 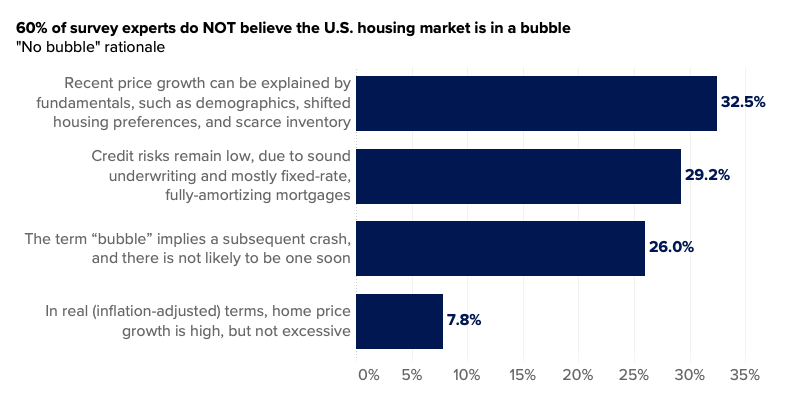 The survey also found that more are skeptical that a touted “soft landing” by the Federal Reserve will come to fruition and that an inevitable recession is on the horizon. Those polled by Zillow are skeptical that this "soft landing" will be achieved, as 56% of survey respondents do not expect the Fed to materially reduce inflation while averting a recession. The remaining respondents are cleanly split, with half believing that the Fed will be successful in avoiding a recession while reducing inflation, and the other half not being sure.

Of the number who doubt a soft landing is possible, 75% of them see a short recession as the most likely economic scenario.

So when might this recession hit? 45% of respondents predict that the recession will hit sometime during the 2023 calendar year, followed by 30% who believe a recession will happen this year, while 8% predict recession conditions in 2024, and 17% in 2025.

"Although the Great Recession was triggered by a housing crash, it's an outlier in the grand history of recessions, which have often strengthened investment in housing due to its relative stability as an asset," Bachaud said.

The panel's expectations for 2022 home price appreciation still rose to 9.3% from 9.0% last quarter.

"Rapidly rising mortgage rates and looming recession risk threaten to tame the pandemic's hurricane-force winds that have whipped the market landscape and propelled U.S. home prices skyward," said Terry Loeb, the Founder of Pulsenomics. "With home values at record-high levels and a vast majority of experts projecting additional price increases this year and beyond, home prices and expectations remain buoyant. Even among those panelists who believe the U.S. housing market is now a bubble, most expect it to gradually deflate, not suddenly burst."

This edition of the Home Price Expectation Survey consisted of answers from 114 market experts between the dates of April 27 and May 9, 2022. The survey was conducted by Pulsenomics LLC on behalf of Zillow.