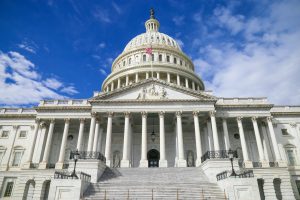 On Wednesday, the Five Star Institute presented the 2021 Government Forum: A Virtual Event, bringing together leaders from the mortgage servicing sector and government representatives for a day full of impactful conversation on the industry’s most pressing issues.

Kicking the day off was Five Star Global Chairman Ed Delgado who welcomed attendees to the virtual event and introduced Rep. Steve Bartlett, Senior Advisory Board Member for Treliant; President & CEO of the Financial Services Roundtable from 1999-2012; and Representative to the U.S. Congress from 1991-1993. While in Congress, Bartlett served as a member of the House Banking Committee, where he led the successful push to let the market set interest rates on government-insured mortgages. He served as Deputy Whip and was a sponsor or principal co-sponsor of nearly 20 major pieces of legislation, including the Enhanced Secondary Mortgage Market Act, Fair Labor Standards Act Reforms, FHA Deregulation, and the Americans with Disabilities Act.

Among the topics of discussion brought up by Delgado was that the industry is heading toward a “Housing Crisis 2.0.”

“There are too many similarities to what the industry was going through back in 2008,” said Delgado of the current state of the marketplace. “This crisis is born not from subprime lending or irresponsible credit, but more from the long-term and last effects of a prolonged forbearance plan.”

Bartlett noted some concerns that need to be addressed by the industry to avoid a potential housing crisis.

“We have some issues the industry needs to deal with,” said Bartlett. “This is nothing like the mess we found ourselves in during the last crisis. The industry is strong, and I have never seen such a good and solid use of technology in any industry that I can recall. They are increasing the use if AI to serve all types of customers. Secondly, the industry is all about serving their customers … finding a mortgage that works and people can pay back.”

The Mortgage Bankers Association (MBA) recently reported that approximately 2.1 million homeowners are in some stage of forbearance, and that, according to Bartlett, is a challenge.

“With the clients we work with at Treliant, the last thing we want to do is foreclose on someone, except in extreme circumstance where someone has abandoned the property,” said Bartlett. “The last thing an originator or servicer should do is foreclosure because, as we say in Texas, ‘All hell will break loose’ if we start doing that! That’s a different mindset than we have had historically with mortgages, but that’s the mindset we have to go into now.”

The “Economic Precipice” panel discussion followed, where Moderator Stanley C. Middleman, Founder and CEO of Freedom Mortgage Corporation led a chat on the fallout of the pandemic and a deeper look at when the U.S. economy will rebound as a result.

Panelists joining Middleman included Edward Golding from the MIT Golub Center for Finance and Policy and Head of the FHA from 2015-2017; Tobias Peter, Director of Research for the American Enterprise Institute’s Housing Center, and Jesse Roth, EVP of Business Development for Auction.com.

“We are coming off a pandemic, which I have absolutely no experience with prior to this in handling,” said Middleman. “We have seen some significant events in our lives—hurricanes, earthquakes, disasters—but certainly nothing of this magnitude. We have seen a significant government response, directing private enterprise to go out and do the job of supporting the people in this country. From my perspective, we have done an unbelievable job of protecting people and their homes, helping them continue life as close to normal.”

As Middleman noted, the government and servicing industry have worked in unison to keep more Americans in their homes as the nation faced the crisis of the pandemic over the past year.

“I think it’s important we take on that social responsibility of taking care of homeowners … I call it ‘Capitalism With a Conscious,’ but it’s best when private meets public,” said Middleman. “When the government can do good to help homeownership, I think that’s a real positive thing.”

Goulding noted a number of actions that the government can take not only to ease the volume of forbearances, but also to level the playing field and make affordability a possibility for all.

“We know a lot of groups have been left behind,” said Gouding. “We need a way, and homeownership, along with education, is a way to build up wealth in communities that had not had access to wealth.”

And as the presidential regime transitioned in January, with it brought a number of new appointments to the housing industry’s top regulators. With new leadership at the U.S. Department of Housing & Urban Development (HUD), Consumer Financial Protection Bureau (CFPB), and the Federal Housing Finance Agency (FHFA), the “Setting Priorities” panel examined the focus of these new leaders and what they can do to facilitate a smooth transition for those coming out of forbearance.

Innovation and adapting new technologies was a topic of the panel as more and more in the servicing space are utilizing AI-powered solutions to assist borrowers through their forbearance plans. In turn, government agencies too are adapting these tech solutions as evidence by Ginnie Mae’s recent announcement that their Office of Enterprise Risk (OER) has launched a series of machine learning and AI model pilots. One AI algorithm being deployed by Ginnie Mae will reduce the probability of false negatives and false positives when identifying issuers that may pose enhanced risk, but may slip through the cracks of traditional methods of risk identification.

“We are currently moving our entire platform to the cloud,” said Pordzik. “By doing so, it will open up a lot of doors for Ginnie Mae in terms of being very agile and quick to modernize our platform.”

The Coronavirus Aid, Relief, and Economic Security Act (CARES Act), a $2.2 trillion economic stimulus bill passed by the Congress and signed into law by the President last March in response to the economic fallout of the pandemic has impacted the servicing industry. The Government Forum featured the “Caring for Homeowners” panel which took a deeper dive into just how this far-reaching legislation affected servicers. Let by Steve Meyer, AVP, High Risk and Investor Compliance for Safeguard Properties, those on the panel included Marissa M. Yaker, Managing Attorney of Foreclosure for the Padgett Law Group; Kristin Wong, Financial Analyst for the CFPB; and Jack V. Konyk, Executive Director of Government Affairs for Weiner Brodsky Kider, PC.

“The industry has done a great job of identifying people who are seriously delinquent and getting them into forbearance,” said Wong. “Of the borrowers who became seriously delinquent due to COVID, just 2% of them have not taken advantage of forbearance. Ideally, that number should be 0%, but a real effort has been made by the industry to reach out and assist these struggling borrowers.”

And as the GSEs prepare for what has been determined as their "ultimate exits from conservatorship," the “Charting the Future of the GSEs” session discussed the challenges that still exist to this plan, and if the events of the past year have slowed the GSEs' momentum.

Fannie Mae SVP and Chief Economist Doug Duncan followed the GSE discussion offering his expert views on housing finance, the mortgage industry, and the broader U.S. economy, providing insight into buyer and seller attitudes about homeownership in his presentation “Where Housing is Headed.”

“Our expectations for economic activity in 2021 is that we will see a continued decline in unemployment, down to something in the 5% range,” said Duncan. “At the same time, we will see economic growth continue to accelerate and over the full year, grow to somewhere around 6.8%, which will be the strongest annual growth rate we will have seen since the very early 1980s.”

Closing out the Government Forum was the “Eye on the Horizon” session where industry leaders discussed key takeaways from the day and presented their outlook for what lies ahead for the housing market.

And while the pandemic impacted every pocket of the nation, Montgomery noted the industry had preparation for such a widespread crisis on a smaller scale when battling through events such as hurricanes and other natural disasters.

“We had all had warmups for COVID-19, and we didn’t know it at the time, but we would have regional natural disasters, sometimes in large urban areas like Hurricane Harvey, but never had anything with the reach of COVID-19 where every city was impacted by it,” said Montgomery. “Collaboration among the governmental agencies was very important, we were talking almost every day, in particular with the FHFA. We didn’t want the enterprises going in one direction. We looked at the situation from the perspective of homebuyers and what would be the best situation to stay in their homes. Communication was important not only with the government agencies, but in getting back to the public.”

The Five Star Institute would like to thank those companies that supported the 2021 Government Forum as sponsors, including Host Sponsor Auction.com; Co-Host Sponsor Altisource; and Partner Sponsors Insight One Solutions, Mortgage Contracting Services, Padgett Law Group, and Safeguard Properties.

Coming this September, the Five Star Conference & Expo returns with an in-person event to the Dallas landmark Reunion Tower, Hyatt Regency Dallas, September 19-21. Click here for more information or to register for this event.