Keeping Up With Customer Demographics 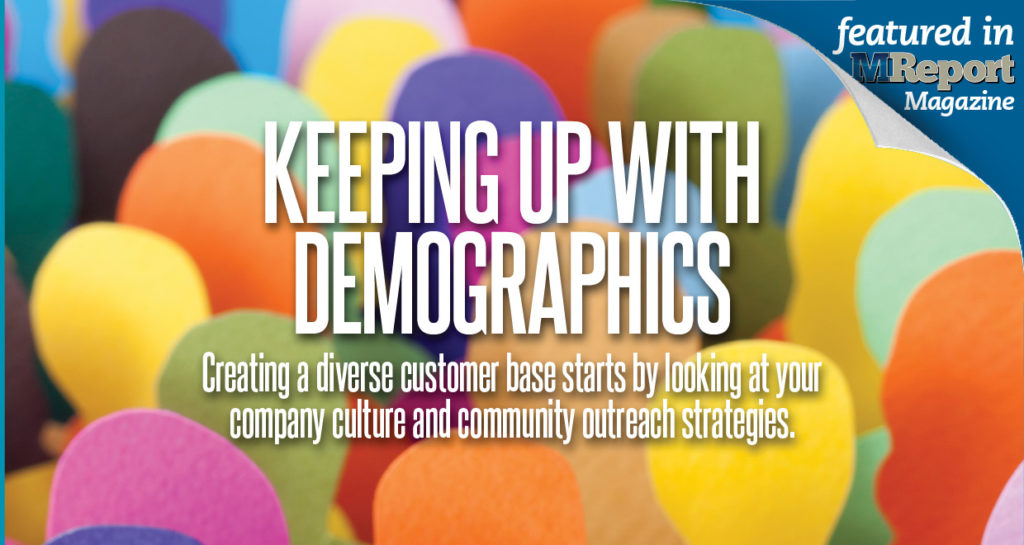 Editor's note: This feature originally appeared in the June issue of MReport, out now.

It seems like the demographic profile of borrowers has changed in the blink of an eye. The age, gender, and race of homebuyers has shifted, and the mortgage industry would be wise to pay close attention.

Almost half of all millennials are part of a minority race or ethnic group. That’s a substantial number when you consider that the millennial generation makes up the largest share of today’s homebuyers and accounts for one in three home purchases.

Many lenders are still struggling to effectively reach and engage minority, millennial, and female consumers. They have difficulty developing diverse organizations, particularly at the leadership level, and often remain unaware of the many tools and resources that are available to help.

The fact is, achieving diversity is not an instant proposition—it’s a multifaceted commitment that encompasses everything you do, whether you’re a loan officer or the CEO.

Market research is a critical part of multicultural B2B marketing. To successfully engage a community, organizations need to know how to best reach it and develop campaigns that reflect its nuances. Companies also need to determine which platforms these communities are most likely to use to see and hear the messages.

Including diverse representation in marketing materials is an obvious step. When Latinos, African Americans, Asian Americans, women, and other minority communities look at flyers, ads, and social media posts, they should be able to see themselves. Lenders typically do a decent job of representing a diverse population in their marketing, but diversity efforts often, unfortunately, end there, as mortgage companies don’t always consider other meaningful ways to reach multicultural homebuyers.

For example, many lenders will market to Asian Americans in their native languages. But when an Asian borrower wants to move forward with getting a loan, few lenders provide mortgage documents in a language other than English, which can deter borrowers from following through with their transaction. To make the loan information gathering or loan process easier for multicultural borrowers, lenders should ask them for their preferred language and be prepared to guide them through the process in that language.

The Hispanic population, in particular, is forming households at a faster pace than any other demographic,” said Jason Madiedo, CEO and President of Alterra Home Loans, a minority-owned, nationwide mortgage lender. “We’ve created a culture at Alterra that caters to Hispanic and other minority segments by hiring loan officers who are bilingual, but more importantly, are familiar with the culture and the special needs of those borrowers.”

Seventy percent of Alterra’s loans are made to first-time homebuyers, and 80 percent are made to minority consumers.

Also, borrowers—minority and otherwise—may not be fully aware of all the mortgage options available to them. For example, many potential homebuyers believe they need to have a 20 percent down payment to purchase a home, an impactful burden to some, as research from the U.S. Mortgage Insurers (USMI) shows it typically takes longer for minority borrowers to save that 20 percent. On average, it takes African Americans 31 years to save for a 20 percent down payment, Latinos 26 years, and White Americans 20 years.

When organizations consider that millennials comprise the largest segment of homebuyers and that nearly half of them are part of a minority race or ethnic group, there’s no question that lenders should be focusing on younger generations. Today’s young consumer favors digital technology, so it shouldn’t be surprising that social media and mobile phones should be part of a lender’s diversity efforts. In fact, the average American now spends more time socializing and shopping on their mobile devices than on a computer.

Lenders can take steps to connect with borrowers on social media and mobile platforms. For example, video has become a popular platform for quick communication and responses to consumers, and originators looking to improve communication and relationships with their borrowers could consider using this medium to respond to questions or send quick updates. Video can also be used on social media by recording it through a computer or smartphone and sending directly through Facebook messenger or text message, two of the most popular ways to communicate among millennials. Video allows originators to communicate complex mortgage topics that would otherwise be difficult to explain in a text message while delivering it through the convenience of an instant message. Additionally, videos allow consumers to build a relationship and greater trust with their originator.

Diversity isn’t just about selling loans to more diverse homebuyers—it’s about building diverse organizations as well. In this respect, the mortgage industry still has a long way to go. According to a 2015 study by the STRATMOR Group, 81 percent of all loan officers identified themselves as white, compared to 10 percent who identified as Latino, and 3 percent as black or African American.

There are two compelling reasons to change. The first is Section 342 of the Dodd-Frank Wall Street Reform and Consumer Protection Act, which sets forth diversity and inclusion objectives that apply to regulated financial institutions (see sidebar). Secondly, it makes practical business sense for lenders to pursue their diversity objectives—research shows a diverse workforce can improve financial performance, lead to more innovation, and help attract a diversified customer base. In a study of more than 1,000 companies across 12 countries, McKinsey & Co found that the top 25 percent of organizations based on ethnic diversity were 33 percent more likely to have higher-than-average profits.

One way to begin is to create a corporate vision or a statement that addresses the company’s values. Of course, words without action aren’t much use—for real change to happen, organizations must walk the walk.

Many lenders avoid making a sincere effort at diversity not because they think it’s unimportant, but because they don’t understand how to get started. Fortunately, there is plenty of help available in the industry, from business partners that have already developed mature diversity initiatives, as well as resources provided by third-party firms, industry groups, and others that specialize in helping lenders reach more diverse markets.

Tackling diversity in the mortgage industry isn’t easy. The payoff, however, is extraordinary. The numbers don’t lie—the future of the housing industry lies in millennials and minority borrowers. Today’s mortgage industry is at a crossroads in which diversity is not a gimmick or a competitive advantage; it’s a mandate.

Here’s one final thought. While various cultures might be completely distinct from one another in many aspects, in the end, every homebuyer wants the same thing—value and quality they can afford. If leaders keep that in mind as they build a diverse organization, they’re sure to be successful.

Christina Bartning is VP, Marketing and Client Solutions for National MI, a private mortgage insurer based in Emeryville, California. She has 20 years’ experience in the mortgage industry and has been with National MI since the company’s launch in 2012, building the marketing and the product development team from the ground up. She can be reached at [email protected]

Kristin Messerli is Founder and CEO of Cultural Outreach Solutions, which helps companies reach millennials and underserved segments through employee training, market research, and digital strategy. She can be reached at [email protected] CulturalOutreach.net.