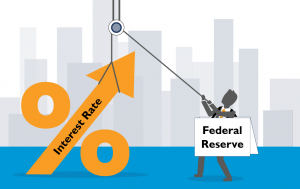 Three-quarters of a point. This is the amount the Federal Reserve chose to raise the nominal interest rate by citing the need to combat the highest rate of inflation since the 80s.

To put that another way, this is the largest rate hike seen since the Nov. 15, 1994 meeting of the Federal Open Market Committee (FOMC) when rates were upped to 5.5%.

This increase marks the third of the year, the first two rate hikes were 0.25% and 0.50%, respectively.

The committee made this change seeking to achieve a maximum employment and inflation rate of 2% over the long run. They anticipate that ongoing increases will be necessary to keep these numbers in the target range.

“Overall economic activity appears to have picked up after edging down in the first quarter,” the committee said in a joint statement released at the conclusion of the meeting. “Job gains have been robust in recent months, and the unemployment rate has remained low. Inflation remains elevated, reflecting supply and demand imbalances related to the pandemic, higher energy prices, and broader price pressures.”

“The invasion of Ukraine by Russia is causing tremendous human and economic hardship. The invasion and related events are creating additional upward pressure on inflation and are weighing on global economic activity. In addition, COVID-related lockdowns in China are likely to exacerbate supply chain disruptions. The Committee is highly attentive to inflation risks.”

The committee also stated that their policy goals may change as other market influences and risks present themselves over the coming weeks.

In a press conference after the announcement, Chairman Jerome Powell said that future increases of 0.25%-0.50% should be expected, but said he does not believe that an increase of this magnitude is likely in the future based on current data.

Economists and industry players are already reacting to the Fed’s move.

“Mortgage rates going forward will continue to be responsive to changes in expectations around the Fed’s policy path, as well as inflation expectations,” Gonzalez continued. “The housing market is still extremely tight, with inventory levels remaining near historic lows, leaving room for the market to absorb falling demand.”

“It’s not just actual rates that matter, but rates and overall monetary posture against expectations. With mortgage rates and other long-term interest rates surging before this Fed meeting, we may, somewhat paradoxically, see rates ease somewhat in the days following the Fed’s hike. If the Fed can manage concerns that they’re moving too fast or too slow, while bolstering credibility that they do intend to wrestle inflation back into the target 2% range within a reasonable period of time, the recent volatility that we’ve seen in stock and financial markets could subside.”

“Conversely, there is the possibility that the Fed comes across as too easy on inflation or too harsh, acting without concern for the broader economic impact, unleashing a new round of volatility, and sending rates on a new upwards surge, but that’s not my base expectation. In short, I expect a bit more calm following the June meeting as the Fed seeks to lay out a clear path forward, but there's both upside and downside risk for mortgage rates.”

“Already mortgage rates are more than 2 percentage points higher than they were just 6 months ago, and they’re expected to keep climbing. Higher mortgage rates are having an effect, causing a slowdown among both existing home sales and new home sales in recent months. The tighter financial environment also led us to downgrade our home sales forecast for 2022. We saw the number of homes for sale in May, which were on par with last year at the beginning of the month, increase each week as more homeowners decided to sell and buyers grappling with higher housing costs grew choosier. This trend has continued into June.”

“The cost of financing 80% of the typical home listed for sale has increased by more than 50% in the last year, a surge which dwarfs even the 40-year high in inflation (+8.6%). And further mortgage rate increases will push that figure higher. Data suggests that many shoppers are rethinking their housing budgets, with some of those who can’t relocate to find affordability choosing to rent for now.”

“But rents have also outpaced inflation, providing little respite for households hoping to shrink the share of their budget going to housing. It’s no surprise then, that a recent survey conducted by Realtor.com’s Avail, showed that two-in-three renters cited rising rents and household costs as the top cause of financial strain, a bigger share than costs for food and groceries or transportation.”

“One silver lining of the ultra-competitive housing market is that home shoppers have had to make larger down payments over the last year in order to successfully compete. This has helped create a substantial equity cushion in the housing market, with equity totaling 69.9% of all homeowner real estate, the highest share since 1986.”

Mike Fratantoni, the MBA's SVP and Chief Economist said, “The Federal Reserve is racing to catch up to economic events, announcing today a 75-basis-point increase and signaling more increases to come. A federal funds target rate likely to reach almost 4 percent by the end of 2023 should be effective in slowing the economy and ultimately bringing down inflation.

“The ongoing reduction in the size of the Fed’s balance sheet, including its holdings of MBS, is another factor putting upward pressure on mortgage rates.

“The housing market has slowed considerably over the past month as rate increases have taken hold. We expect that this slower pace will remain through the summer, but buyers could return later this year if the Fed’s plans are better understood by the market and lead to less rate volatility.”

“Today’s announcement by the Federal Reserve set a big increase in interest rates and means several more rounds of rate hikes are on the way in upcoming months. So far, the short-term fed funds rate that the Fed directly controls has risen by 175 basis points. But the 30-year fixed rate mortgage has risen even more – by nearly 300 basis points. On the same $300,000 mortgage, the monthly payment has risen from $1265 in December to $1800 today. That’s painful and, consequently, will shrink the buyer pool."

"Home sales have recently been trending down towards 2019 figures. Sales could fall even further with some inventory sitting on the market for more than a month like in the pre-pandemic days. Pricing a listed home properly will, therefore, be the key to attracting buyers. In the meantime, rental demand will strengthen along with rents. Only when consumer price inflation tops out and starts to fall will mortgage rates stabilize or even decline a bit. That is why providing additional oil supplies will be critical in containing consumer prices and interest rates.”