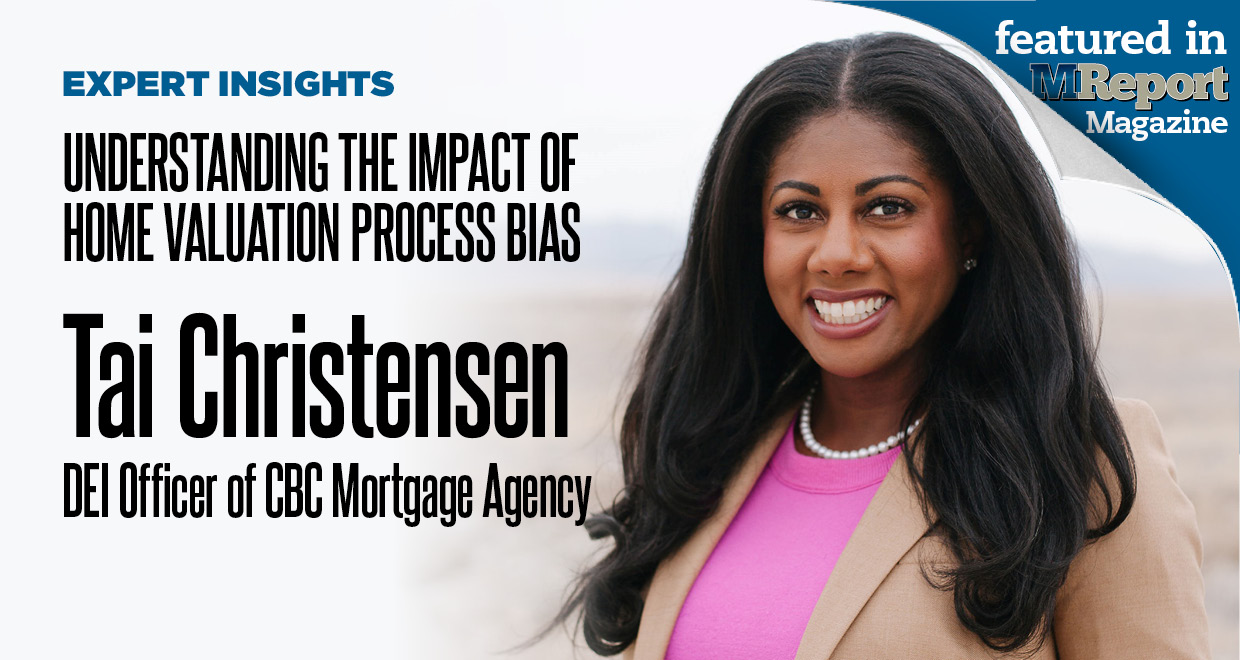 This piece originally appeared in the June 2022 edition of MReport magazine, online now.

Tai Christensen is the Diversity, Equity and Inclusion Officer and the Director of Government Affairs for CBC Mortgage Agency, a national down payment assistance provider, and has 17 years’ experience in the mortgage industry. She has been a loan processor, the manager of a mortgage brokerage focusing on modifying loans for families facing foreclosure, and the manager of a law firm specializing in negotiating mortgage terms for families facing Trustee Auction dates.

How are minority sellers impacted by appraisal bias?
Appraisal bias typically results in a low valuation for homes in majority-minority neighborhoods. If they find a buyer for their home and the appraised value is lower than it should be because of appraisal bias, the minority seller will either have to lower the price of the home or risk losing the sale. Ultimately, this means sellers get far less money for their home than sellers in other neighborhoods. This can have a negative financial impact on these sellers, especially when they don’t understand why similar homes in white neighborhoods are valued much higher than theirs.

What about minority homebuyers; are they impacted by appraisal bias?
Absolutely. Most minority buyers can’t buy a home without a mortgage, and lenders won’t finance properties that aren’t worth what the buyer agrees to pay for it. So, when the appraisal is low, the minority buyer is forced to come up with more cash or lose the property to an all-cash buyer. By the way, minority buyers are less likely to be able to get money from family members to make up the difference created by a low appraisal. So, appraisal bias hurts them in multiple ways.

Is appraisal disparity a form of redlining?
Definitely. When you’re talking about redlining, you are talking about housing bias in minority neighborhoods and demographics. Even though redlining was outlawed in 1965, the remnants of it are still here today in communities of color because values in previously redlined areas are much lower than other areas.

This means that homeowners in majority-minority neighborhoods have less home wealth than majority white neighborhoods. In fact, some fair housing attorneys have referred appraisal bias as “present-day redlining.”

How does redlining impact minorities?
If you go back to the 1930s, when redlining was an accepted practice, white Americans were moving into white-only neighborhoods and beginning the accumulation of wealth, which in the long run, benefitted the financial trajectory of their descendants.

Meanwhile, minorities were driven to poor neighborhoods that they could afford or high-density multifamily housing. Even if they could afford a home in a majority white neighborhood, they couldn’t, because these communities prohibited people of color. So, in minority areas, appreciation and wealth accumulation was far less or nonexistent in many cases.

That’s still true today, all because of redlining.

If there is a bright side, it is the fact that appraisal bias is becoming more widely known and talked about. The appraisal industry has acknowledged that appraisal bias exists and is taking steps to address it. Plus, the Biden administration recently adopted an action plan to dismantle racial bias in appraisals. For the sake of those who have been impacted by the appraisal gap, we can only hope these efforts create real change.