Lessons Learned From the Great Recession 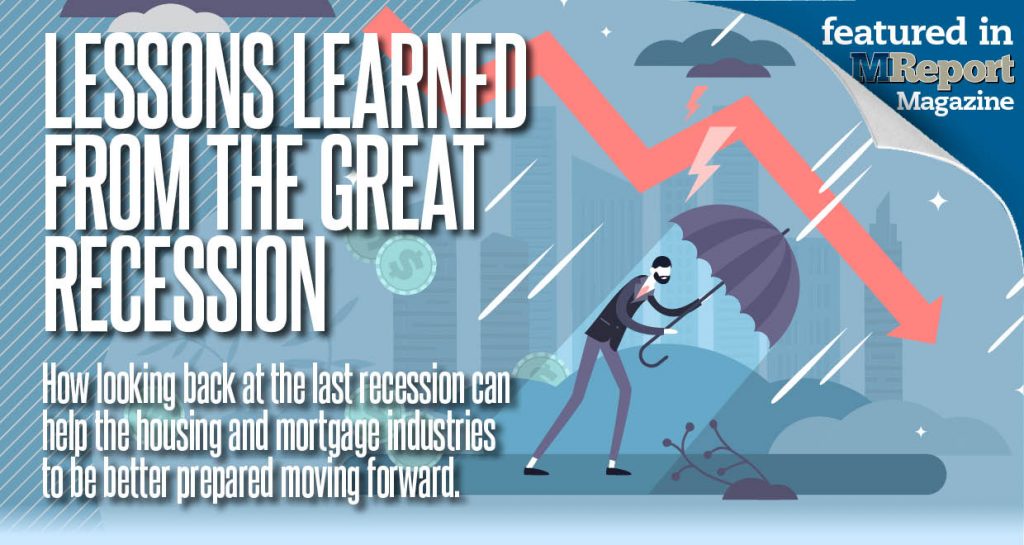 This feature originally appeared in the June issue of MReport.

Beginning around 2007, the U.S. faced a nearly unprecedented economic downturn—certainly one like we had never seen before in the new millennium. Over 8 million jobs were lost, millions of homes went into foreclosure, and banks once seen as invincible shut their doors for good.

This financial crisis highlighted many areas of the industry that were due for change. Today, the longstanding impacts of that recession can still be seen in our economy in both the processes we put in place and some new segments of the market that emerged as a result. Over a decade later, lessons learned during the Great Recession remain relevant to the housing industry. As another recession looms over both our country and the globe as a result of the COVID-19 pandemic, it is important to look back at the previous recession, understand both common and unique factors compared to the situation today, and consider how we can minimize harm and promote recovery this time around.

Factors That Contributed to Severity

When looking back, the first aspect of the last recession to consider is what drove its severity. The most recent recession the U.S. experienced, beginning around 2007, was especially severe for a number of reasons, primarily large job losses, a concurrent financial crisis, and a large number of home foreclosures. The last recession saw job losses on a far greater scale than previous recessions the country had seen.

Between November 2007 and November 2009, employment fell by 5.9%—almost four times the job losses that resulted from the recession in 2001. Those lost jobs impacted countless families and weakened consumer spending considerably. In the housing market, specifically, many people decided to delay starting families, which in turn household formation, a crucial source of demand in the housing market. Others chose to rent for prolonged periods of time instead of buying their own homes, ultimately decreasing the homeownership rate. The concurrent financial crisis also played a large role in the severity of the last recession. A large number of financial institutions went bankrupt during that time, including large institutions such as Bear Stearns, Lehman Brothers, and AIG.

Financial institutions play a major role in financing business and consumer spending, including housing. The financial crisis reduced credit availability to both
households and businesses, meaning that investment pulled back more during the last recession than in prior recessions. The last recession also saw a significant increase in foreclosures, which were incredibly damaging to the functioning of the housing market. Foreclosed homes often sell at a deep discount to normal home sales.

As a result, markets like California, Nevada, Arizona, and Florida, where foreclosures represented a large amount of homes for sale saw huge home price decreases. Lower home prices mean that homeowners, who accounted for around two-thirds of households at that time, experienced a sharp decrease in wealth. This decrease in wealth made them even less willing to spend on discretionary items, dealing a heavy blow to the industries that served the affected consumers. The large number of foreclosures also delayed the recovery in new construction, which decreased sharply throughout the recession and did not resume growing until 2012.

What The Industry Did to Help

There were significant regulatory changes following the last recession. The goal was to identify gaps in the way the housing market was set up and practices
that contributed to the crisis, ensuring that they are not repeated in the future. While it is not always possible to avoid a recession, these changes will likely lessen a recession’s severity and its impact on the housing industry, homeowners, and borrowers. Two things the industry has done over the past decade in response to the recession are: 1) better capitalizing the financial sector; and 2) improving lending standards. Both of these things were implemented in hopes of preventing another economic meltdown on the scale we witnessed during the Great Recession.

In the private mortgage insurance (PMI) industry, the government-sponsored enterprises’ (GSE) Private Mortgage Insurance Eligibility Requirements (PMIERs) created a prescriptive, risk-based framework of liquid assets to be held against insured loans, as well as operational requirements for mortgage insurance underwriting and quality control processes. This framework was created to protect institutions from suffering the losses they did during and after 2007. At the end of 2019, the mortgage insurance companies belonging to the trade group USMI collectively had minimum required assets of $11.2 billion and available assets of $15.4 billion, for a sufficiency ratio of 136.5%. Having more capital means that the industry is better positioned to withstand losses in a stress scenario, ultimately making the financial system stronger, especially for the next time it faces a downturn. It also means significant protection for taxpayers, as private capital will be used to meet losses before taxpayer funds. Lending standards also have changed significantly over the last decade.

The layering of risky loan features that contributed to much of the negative impact on the housing market such as no or negative amortization, and lack of documentation of income, employment, and assets have largely disappeared in recent years. The average credit score required for a loan is also higher now, meaning that borrowers getting the loans typically have a longer and better history of responsibly using credit. Stronger lending standards and more capitalization are two ways that the housing industry has already learned from the past recession and worked to put processes in place to protect the housing system, as well as the consumers it serves, but these are not the only two responses to the crisis. The U.S. also passed regulations, such as the Dodd-Frank Act, which subsequently formed regulatory bodies like the Consumer Financial Protection Bureau.

These regulations, and countless others, were set in place to create a line of defense to keep such a meltdown from ever happening on the same scale again. The more we reflect on our past economic experiences as a country—both good and bad—the more lessons we will be able to draw upon to create regulations and systems to protect the nation’s economy, its citizens, and the financial institutions that serve them. Being able to look back and assess how we can learn from mistakes or successes is crucial when we begin walking on the road to recovery.

Looking back at the previous recession, it came with a rather slow recovery time. In hopes of a faster recovery from the next recession, it is imperative to understand why the last one took so long. When we came out of the last recession, credit availability stayed tight for too long. As a result, many potential homebuyers were shut out of the housing market for a significant period. That is especially true for first-time homebuyers with limited savings, who have a shorter credit history, but are a critical part of the housing market. In the end, over 3 million potential first-time homebuyers lost the opportunity to become homeowners between 2007 and 2015 and the housing industry lost the opportunity to serve these homebuyers. The ripple effects of this missed opportunity stretched far and wide in the housing industry, and its impact is still felt today.

Nevertheless, the last recovery also showed the industry’s ability to adapt and innovate in a downturn. For example, some investors realized that people who lost homes to foreclosure or those who could not buy because of tight credit standards still needed a place to live. This gave rise to investor-owned, single-family rental businesses. Nonbank lenders also seized their opportunity when bank lenders began exiting the mortgage market, and these non-bank entities represent a major segment of the mortgage industry today. Because housing is such a fundamental part of people’s lives, disruptions within the housing industry will give rise to alternatives to meet these same needs. Ultimately, any disruption in the housing market—or any industry, for that matter—tends to lead to innovation.

This is the biggest lesson to be learned from our past recession and one that should be carried through future ones: we must embrace change in the middle of unprecedented disruption. Especially now, as both our country and our world are experiencing a unique and unprecedented pandemic, any impending economic impacts because of this also will be unique. It is key to be flexible and to recognize that a severe disruption to the economy and the housing market calls for change.

It is key to identify and understand the disruption, and to move to a better solution that allows the industry to better serve homebuyers and borrowers. It’s clear that unprecedented challenges call for unprecedented solutions. As we figure out what this potential recession looks like and start thinking about how we can help the industry recover, we are best served by building on the innovations that got us out of the last one. Most importantly, we should not be tempted to fall back to the viewpoints and practices that may produce short term gains, but ultimately set up the industry to manage another round of challenges down the road.

2020-06-19
Mike Albanese
Previous: The Week Ahead: Positive News For Existing-Home Sales?
Next: Existing Home Sales Fall 9.7% in May