Home >> Daily Dose >> How Can Lenders Use Data to Benefit Consumers?

How Can Lenders Use Data to Benefit Consumers? 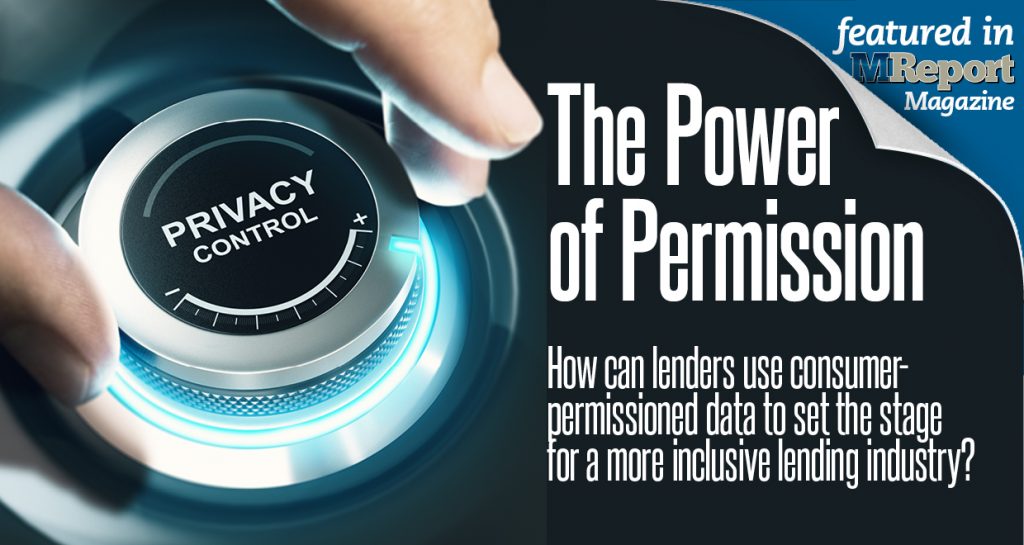 Editor’s note: This piece originally appeared in the June edition of MReport.

It’s a new age in lending. As in many industries, we’re seeing the impact of digital disruption. Slow, cumbersome access to data that wasn’t always accurate is now giving way to consumers who are empowered to control the use of their financial data faster than ever before.

Greater data access and control for consumers has been a major movement across the globe. There are organizations and regulations that facilitate data sharing, privacy, and security, and in some regions of the world, the way companies handle data can have significant financial implications. The best example of this is the general data protection regulation (GDPR) in the European Union, which is designed to protect the privacy of consumers by imposing fines for non-compliance that can total up to 20 million euros (nearly $23 million), or 4% of an organization’s worldwide annual revenue.

Whatever the model for a region, country, or company, consumers have come to expect increased control over their data along with greater benefit from its use. Organizations eager to succeed in this new environment should look to digitize customer engagement and to do so
in a way that not only improves processes but also enhances the experience for all involved.

One way to facilitate such an approach is through consumer permissioned data. Allowing customers to share their data—and asking for their permission when doing so with a third party—
gives consumers a greater degree of control and knowledge over how their financial data is used. Organizations that begin using consumer-permissioned data consciously place the consumer at the forefront of any transaction, giving them expanded power over their financial health.

If you’re looking for even more incentive to start empowering consumers, consider some of the challenges they face. According to
the Consumer Financial Protection Bureau, 45 million Americans don’t have a credit score. Even those who are lucky enough to boast a
solid credit history may fall just short of qualification standards. The result? An uneven playing field for credit-invisible consumers.

Lenders can open up access to credit for larger purchases such as cars and homes by paving the way for consumer-permissioned
data and opt-in credit scores. Capable of providing borrowers the chance to browse and share more than just a credit score,
consumer-permissioned data can ensure every piece of relevant information is considered throughout the credit-decisioning process.
While the emerging credit scores are not used in mortgage lending, they demonstrate the impact of bringing the consumer into the
decisioning process.

Potential borrowers that would traditionally fall short of qualifying for a loan can rely on consumer permissioned data to provide a closer look at their financial health and ultimately improve their chances of obtaining a loan.

Beyond providing consumers more of a say in the lending process, offering consideration to consumer-permissioned data can also increase inclusion throughout the credit economy and even bring organizations extra business with those consumers who are willing and capable of managing a loan.

The American Dream is often defined by big-ticket purchases. According to a MassMutual study, three out of four consumers say they associate the American Dream with homeownership. Unfortunately for consumers whose financial status isn’t readily visible, the dream isn’t always within reach. Heavy emphasis on a limited set of data throughout the lending industry can create the illusion of poor financial
health. A closer look at expanded financial data, however, provides a better understanding of consumers’ capacity to take advantage of
borrowing opportunities.

With the emergence of consumer-permissioned data, we are able to set the stage for a more inclusive lending industry. While credit history will always be a core piece of the credit decisioning process, there’s more to a consumer’s financial well-being. Instead of considering a limited set of information, lenders begin to work with more robust data sets that are designed to provide greater insight into a borrower’s
ability to pay back a loan.

Slowly but surely, we are moving to a model across the lending landscape that will include data that is available in a consumer’s day-to-day financial transactions. From cell phone plans to utility payments, there’s a wide range of data points that may be considered. The boost
in visibility that promises to accompany such data can go a long way toward highlighting potential borrowers who may not have otherwise been considered.

One of the more beneficial trends within mortgage lending is using such data to confirm a consumer’s income and assets. This digitization of the verification process delivers significant dividends to those who have fully embraced the process. It’s fast, simple, and more accurate.
Better yet, it also frees up the time and resources needed to build both customer relationships and business. No more need to spend
hours tracking down a potential borrower’s assets or dedicate a significant portion of a budget to verifying borrower income.

While income and asset verification is a major procedural shift, it’s just the start of how consumer-permissioned data will transform mortgage lending. From pre-qualification to servicing to final payment, consumer-permissioned data will be used across the life of a loan, thereby ushering in a more efficient and inclusive lending process than ever before.

Consumer empowerment can prove profitable in more ways than one. In the U.K., for example, Experian identified nearly six million credit-invisible consumers. The good news? That number has since dropped by 765,000 due to the consideration of data from utility companies and social housing tenants. In the U.S., consumer-permissioned data is beginning to help paint a clearer picture of a consumer’s ability to manage a loan.

Given how difficult it is to make big-ticket purchases without the help of a loan, consumer-permissioned data has the potential
to open up a whole new world of opportunities for borrowers that were previously on the outside looking in. Rather than forgoing
the purchase of a house or car, consumers who are empowered to share more than just their credit score can move one step closer to
achieving the American Dream.

Beyond being the right thing to do, the use of consumer-permissioned data access also opens the door for more lending opportunities. It brings in extra business by using additional data points to inform lending decisions. The more data referenced throughout the credit decisioning process, the more prepared lenders are to determine a consumer’s qualifications for a loan and potentially uncover loan candidates who previously slipped under the radar.

According to research from Accenture, bringing previously excluded consumers into the formal banking sector could create $380
billion in new revenue for banks. Giving consumers the power to share any and all data they believe is relevant to financial fitness
provides greater insight into a potential borrower’s financial health. All of this furthers the ability to employ safe lending practices.

According to a 2018 “Pulse of Fintech” report from KMPG, more than $12.5 billion has been invested in online lending over the past four years. Not only will such investments heavily influence digital innovation moving forward, but they’re also poised to disrupt the lending industry as a whole. According to research from Fannie Mae, most lenders feel the mortgage industry is twice as competitive as it was 12 months ago.

This steady increase in competition is just one sign of an evolving lending industry. Even with the emergence of new lending criteria or absence of available capital, lenders aren’t typically required to vie with one another for every last customer. The simplification of the mortgage origination process, however, is poised to serve as a source of competition for consumers and lenders.

It’s time to embrace a digitized lending industry where shorter origination times and streamlined mortgage processes are the norms. This movement toward greater convenience has been seen across virtually every industry over the past few decades. Take Blockbuster and Netflix, for example. Unable to provide a service that matched the flexibility of Netflix’s digital streaming, Blockbuster was ultimately driven
out of business.

Similarly, eBay and Craigslist combined to render classified ads in major newspapers all but useless. Instead of picking up physical copies of a newspaper, consumers gravitated toward a digitally driven method of creating and viewing classified ads. The list goes on with Blackberry,
Motorola, and Nokia, each of which saw a significant drop in market share following Apple’s launch of the iPhone, not to mention a digitized business model.

All in all, business is done digitally now more than ever, and the rise in digital mortgage origination does not appear to be a fluke. As more lenders look to complete the origination process, with more efficient digital processes, the percentage of digital mortgages will continue to skyrocket.

When it comes to competing in the era of digital lending, commitment is crucial. Jump head first into the digital deep end by
making consumer-permissioned data an important part of your digital ambitions. The sooner you empower consumers to permission use of their financial data, the easier it will be to adapt to an increasingly digital, inclusive, and simplified lending industry.

Previous: The Ups and Downs of Home Sales
Next: Legislation vs. Automation: The “Stopping Bad Robocalls Act”