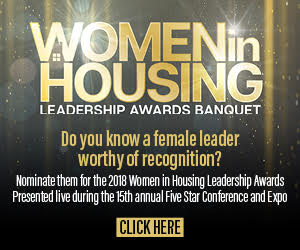 As has become an annual tradition, the Five Star Institute is once again taking time out to recognize the extraordinary accomplishments of women within the mortgage servicing and housing industries. As part of this year’s annual Five Star Conference, Five Star will present the Women in Housing Leadership Awards during a special banquet on Tuesday, September 18, at the Hyatt Regency in Dallas, Texas. If you haven’t already nominated any outstanding colleagues who have demonstrated leadership and excellence, don’t worry—the nomination deadline for these awards has now been extended to Tuesday, July 10.

This is your chance to shine the spotlight on the industry leaders whose drive, encouragement, and professionalism make your company a better place to work and improve the industry’s commitment to helping build the American Dream of homeownership. Click here to submit your nominees.

This year’s Women in Housing Leadership Awards will be divided into five categories:

You can hit the banner below to submit your nominations for the 2018 Women in Housing Leadership Awards. Take the time to help recognize the extraordinary women of the industry.

Previous: LenderClose Matches Growth With Team Expansion
Next: The Dual Headwinds of the Mortgage Market