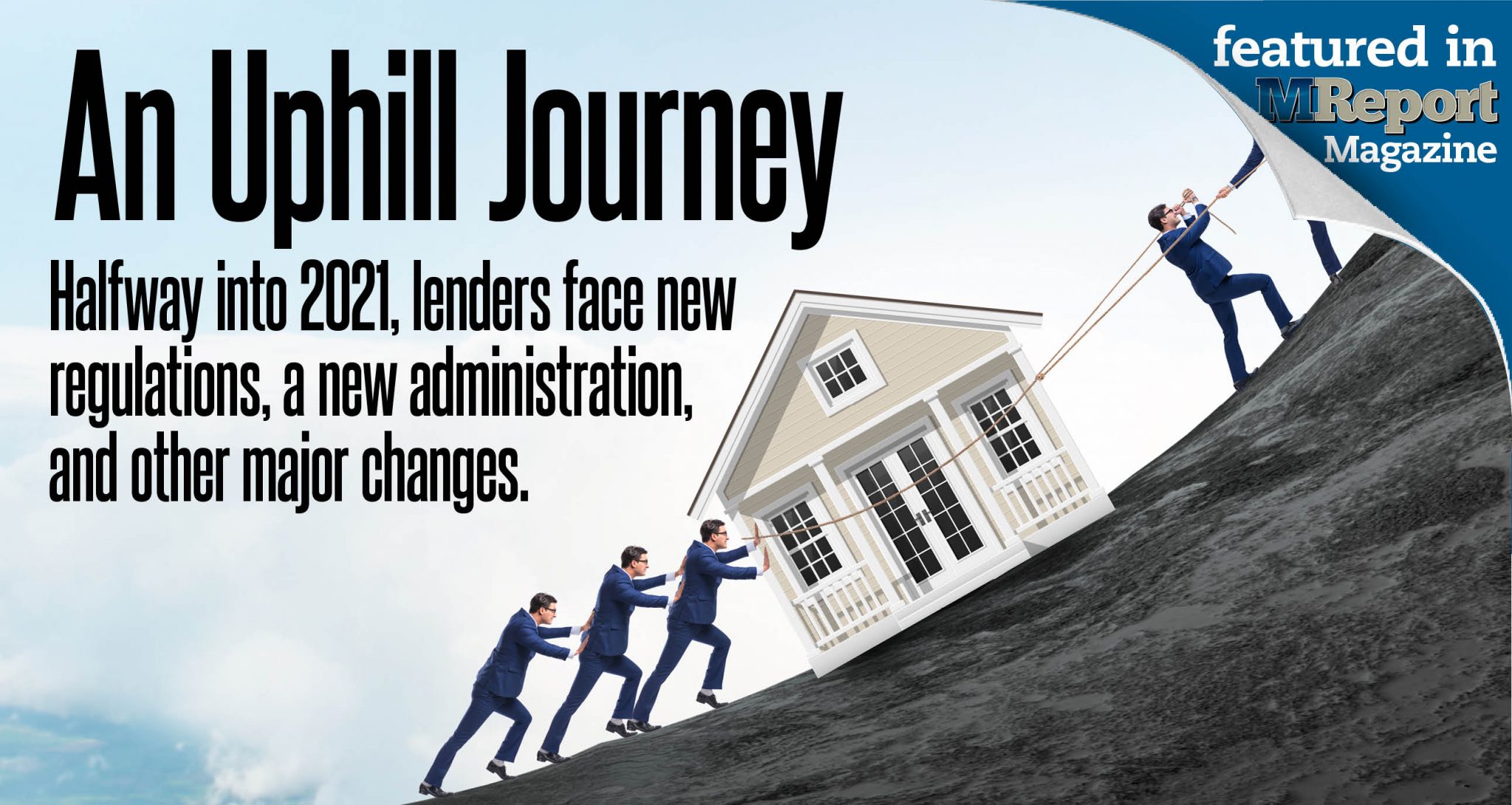 We are now halfway through the year, with spring giving way to summer. Beyond visions of sunshine and backyard BBQs, the Biden administration recently passed the (mostly symbolic) milestone of 100 days in office. The occasion provides an opportunity for lenders to take stock of the current economic landscape, early impacts the administration has had on the market, and some practical takeaways for successfully navigating the next three-plus years.

The Current Landscape
Let’s start with a brief look at the state of the economy, and the housing market in particular. It is crucial to note that the health and outlook of the economy is, at this point, largely dependent on the continued successful rollout of the COVID-19 vaccine. The economy will continue to rebound as states, counties, and cities loosen restrictions on businesses, which is tied to the number of cases and vaccines administered. As I write this, the Centers for Disease Control & Prevention (CDC) currently projects that a majority of the U.S. will be fully vaccinated by June 11. That news, along with falling rates of daily new cases has emboldened economists to ratchet up their projections for the year. The latest Wall Street Journal survey pegs GDP growth for 2021 at a very robust 6.5%, heights not seen since the early years of the Reagan administration. Additionally, the MBA estimates a 2.8% drop in unemployment this year.

The good news isn’t limited to overall economic figures; the housing market continues to perform strongly, thanks in large part to the enduring low-interest rate environment. The National Association of Realtors (NAR) is predicting a 15.1% increase in existing home sales, along with a whopping 24.5% jump in new home sales. Home values have likewise continued to rise, even through the pandemic, and are expected to continue to increase through 2021. Researchers at Zillow recorded a 10.6% improvement in 2020 and predict another 10.4% increase this year.

On the mortgage side, the good news isn’t coming without change, however. Lenders and economists alike see the end of the refinance boom on the horizon, and the renewed focus on purchase transactions. MBA economists anticipate an 11% drop in refinance share, down to 48%; that decrease accompanies a slight uptick in purchase volume. Smart lenders are already shifting resources to invest more in their referral relationships as the refi volume begins to shrink.

New Administration, New Realities
Change has clearly also arrived in the form of a new administration in Washington, D.C. For the lending community, the biggest impact is in the change in philosophy and execution at the Consumer Financial Protection Bureau (CFPB). A brief history lesson: in the early days of the CFPB, under Acting Director Richard Cordray in particular, the agency’s aggressive posture to the mortgage industry (labeled “regulation by enforcement” by detractors) led to billions in fines and high-profile enforcement activity. That approach changed under President Trump, with former CFPB Director Kathy Kraninger’s desire to more slowly implement new rules, focus on clarity and transparency, and, ultimately, her “hope that [the CFPB’s] emphasis on prevention will mean that [it needs its] enforcement tool less often.” With the election of President Biden, however, it seems clear that the CFPB will return to the Obama-era style of enforcement.

On April 1, the CFPB, under Acting Director Dave Uejio (in preparation for Rohit Chopra, who has been nominated by President Biden as permanent Director), the agency issued an emphatic bulletin that put the mortgage industry on notice. The message, headlined “Unprepared is Unacceptable” in the CFPB’s own press release, which focused on mortgage servicers, covered eight major areas of concern, including:

The bulletin was a splash of cold water for lenders who held out hope that the CFPB would not return to a regime of more aggressive audits and enforcement activity. Put the change into a fiscal perspective, Bloomberg noted that “The CFPB under Richard Cordray, an Obama appointee who led the agency from 2012 to 2017, returned more than $12 billion to harmed consumers through enforcement actions. Under former Director Kathy Kraninger, a Trump appointee, the CFPB recovered around $1.5 billion in consumer redress over her approximately two years at the helm.”

Another policy-focused change that lenders will have to grapple with is a renewed focus on fighting “ongoing racial inequity” within financial markets. That will likely mean fair lending enforcements and exams, something lenders must be prepared for.

Additionally, the CFPB has also made it clear that they will be closely watching for sexual orientation and gender-based discrimination, under the Equal Credit Opportunity Act and Regulation B. One evolution in this area is that in the intervening period between the Obama and Biden administrations, the Supreme Court handed down their decision in Bostock v. Clayton County, Georgia, prohibiting sex discrimination under Title VII of the Civil Rights Act of 1964.

This will surely give the bureau more firepower to address any perceived violations; the CFPB also notes its intent to work with Congress to pass the Equality Act, which would “codify protections for consumers against sexual orientation and gender identity discrimination in all financial products and services.”

Lenders must ensure that everything from sales to origination systems to servicing are all working to shore up any potential vulnerabilities.

Other recent activity of note from the CFPB include a proposal to extend foreclosure moratoria (under the Fair Debt Collection Practices Act) through the end of the year, adding an additional 60 days to the status quo.

The policy changes at the CFPB will be carried out by a staff that is being quickly ramped up under Uejio. In February, he initiated a concerted effort to hire more enforcement-focused attorneys. Additionally, Uejio has hired Diane Thompson as a senior advisor. Thompson, a former CFPB official in the Obama-Cordray years, has argued for a CFPB with a greater emphasis on fighting racial and economic inequality. In government, the phrase “personnel is policy” is a reflection of how the hiring practices and trends of any individual agency are a signal of what the implementation of policy will eventually look like. Keep an eye on further personnel moves at the CFPB as the new director takes office and continues to staff up.

The Community Mortgage Lenders of America (CMLA) and other industry groups continue to argue that a path that both protects consumers and deals fairly with lenders would include a requirement that CFPB exams only be initiated upon referral by another regulator.

Additionally, The CMLA has posited that a statutory exemption for responsible, small community-based lenders would help protect access to affordable credit and remove unnecessary burdens and cost from these smaller businesses that do not have the luxury of large compliance/QA teams.

What Should Lender CEOs Be Doing Right Now?
In light of the above, it seems only prudent for lenders to do what they can do to beef up their compliance teams. Whether that means hiring, outsourcing, or investing in technology or other resources, you simply cannot afford to act like this is 2019 and hope for the best. Beyond spending dollars, lenders should be encouraging their compliance officers to take advantage of free and low-cost educational opportunities like webinars.

Additionally, if your team is not closely monitoring key performance metrics and making real-time changes and adjustments, you risk not being prepared for a state or CFPB exam. You simply cannot wait for a quarterly or annual audit to assess performance—that must be an ongoing priority, no matter your company size.

With the new administration in Washington, and aggressive state legislatures, governors, and regulators from California to New York, lenders need to be investing back into their industry by supporting the critical advocacy work of groups, both at the state and national level. This is particularly true for small to mid-sized lenders, who often don’t have a team of lobbyists (or even a lobbying budget at all) to promote sound financial policy. Joining with other lenders to speak with one voice can have a powerful impact on the legislative process.

In short, times are good for lenders right now, but change is coming, and preparation is key. Keep your teams up-to-date on the latest information, don’t neglect compliance/QA, and be ready for a much more energetic CFPB and regulatory environment.

Previous: New Home Listings on the Rise in June
Next: Mortgage Rates Retreat Below the 3% Mark

Michael Jones is the CFO for Thrive Mortgage, LLC, and the Chair of the Community Mortgage Lenders of America. After graduating from Baylor University with a B.A. in accounting and a Master’s in taxation, Jones joined PwC in Dallas, Texas, to advise private companies and high net worth individuals on their tax needs. Over the years, he has been active with both the state and national Mortgage Bankers Association and authored a mortgage novel, Reset, in 2016.