Home >> Daily Dose >> The Rough Road Ahead for the Mortgage Industry

The Rough Road Ahead for the Mortgage Industry 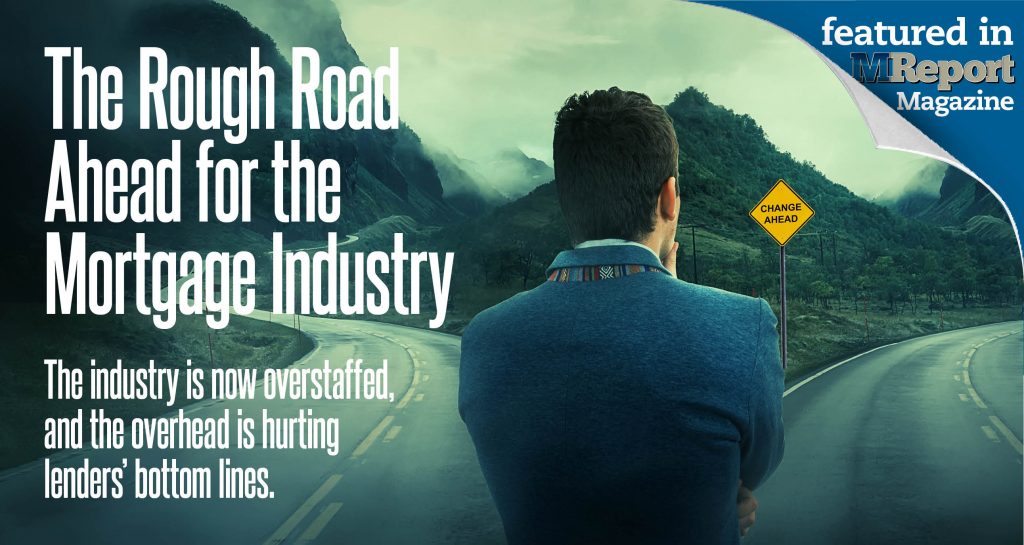 All of the warning signs have been posted. Rates ticked up. Margins thinned. Lead buying from third-party lead generation companies has increased. The mortgage industry is about to get rough, and lenders should be prepared to sharpen all aspects of the marketing and sales operations process—if they haven’t done so already—in order to survive. Unfortunately, there will undoubtedly be some casualties in the next 12 months.

The housing finance industry has been a bright spot for the economy for the past year. Rates hit all-time lows over a dozen times in 2020. Originators hit records time and time again. While the U.S. unemployment rate hit an all-time high of 14.8% in April 2020, the mortgage industry was dramatically understaffed to service the high demand of consumers flocking to buy homes and refinance into lower mortgage rates. Demand spiked so much that lenders actually increased their rates substantially in order to curb volume, which resulted in the highest net production profits in nearly 13 years.

Marina Walsh, CMB, VP, Industry Analysis Research and Economics of the Mortgage Bankers Association, said: “With the surge in mortgage production volume in the third quarter, net production profits among independent mortgage bankers increased, surpassing 200 basis points for the first time since the inception of MBA’s report in 2008.”

Lenders were no longer focused on competing for customers; they were competing for talent to handle the overwhelming production volume. This resulted in a hiring binge. Using the term “hiring spree” seemed to understate what was really happening since lenders were also offering large signing bonuses and guarantees. Many also put together training programs to remotely develop industry newbies into mortgage professionals.

The industry grew quite a bit in a relatively short period of time. This is all well and dandy until you begin to think about what will happen when rates tick up. Well, that time has come. Rates are increasing and refinance demand has dropped compared a year ago. Unfortunately, the industry is now overstaffed and the overhead is hurting lenders’ bottom lines.

The Economics of Mortgage Marketing

In order to keep production up, lenders have already sharpened their pricing, which reduced their margins, and are spending more marketing dollars to drive more leads in order to generate enough production to keep the staff busy.

One easy channel to immediately drive in more leads is the performance marketing (lead generation) channels where vendors sell each consumer inquiry to multiple competing lenders. As demand for buying leads (predominantly refinance leads) increases, the cost for leads go up. At the same time, as rates increased the overall conversion rate on a lead goes down resulting in a spike in the marketing cost per funded loan.

As an example, last year, approximately 10% of high-quality refinance leads were converting into a funded loan. So, if a performance marketing company generated 100 leads, 10 of those leads would fund. However, those leads are not usually sold exclusively to one lender, they are often sold “up to 4 times.”

Since many lenders tapered back their lead buying, many leads were only being sold to one or two lenders. When sold to a single lender for $60 per lead, a 10% conversion rate would yield a marketing cost per funded loan of $600. When sold to two lenders at $30 each, then each lender would convert approximately 5% and still have a $600 marketing cost per funded loan (although they each had to work twice the number of leads to get the same number of funded loans compared to buying exclusively for $60).

More realistic today is a 40% decrease in overall lead conversion because of increased mortgage rates, which drives up the demand for more leads to counteract the decrease in conversion. Each lead is now typically being sold to three lenders, which decreases each lender's conversion rate to 2%.

If prices increased to $40 per lead per lender, that is a $2,000 marketing cost per funded loan—a 233% cost increase! Certainly a shock to the system.

Purchases Are Not Refinances

Many consumer direct lenders focus on refinance business because it is an easier loan type to master at scale using marketing automation. It is also a shorter cycle from the moment you spend marketing dollars to the time you receive revenue from the sale of those loans on the secondary market. Purchase loans take longer as borrowers need to find the home and get into a purchase contract (if they ever do!) not to mention some of those pre-approved borrowers—often referred to as “TBDs” since the property address is to-be-determined—may be swayed by their realtor to go with their preferred local mortgage professional.

Trying to transition from doing 90% refinance business to a 50/50 refi/purchase split is a substantial challenge. Since the purchase loan cycle is much longer, there is a much wider time gap from spending marketing dollars to realizing the revenue. Additionally, it takes more patience and thoughtful consideration in timing follow-up with the borrowers so you are present enough to help them when they need the help, but not too much as to annoy them.

Because of the differences, it requires a separation of loan officers to be consistently successful. If the loan officer has the choice between trying to convert a purchase or a refinance lead, they will lean towards the refinance lead because they have a better chance of getting an origination on a refinance than a purchase. Soon, the purchase leads are neglected and conversion rates tank.

Lenders who try to increase the mix of home purchase loans while the marketing cost to fund a refinance loan jumps 233% are met with tremendous hurdles. It’s a double-whammy of increased expenses with reduced revenue—something the warehouse lenders will surely recognize, putting warehouse lines at risk.

If increased expenses and decreased margins weren’t enough, lenders need to be concerned with loan officers successfully turning the corner from being order takers to being a salesperson again. Most loan officers had record-breaking numbers in 2020 and larger commission checks than they have ever had in their careers, but we cannot ignore the incredible winds that were in their sails.

Loan officers just had an entire year of picking up the phone and cashing in on the tremendous opportunity that the low-rate environment handed them. That doesn’t mean they didn’t work hard, but making as much money as they did in 2020 was significantly easier than in previous years, and we are beginning to return back to what those other years looked like.

The mortgage industry is strange like that. Order taking is easier and pays higher than selling in a normal mortgage rate environment, and egos need to be checked at the door to mentally overcome that dynamic swiftly. As the incredible tailwinds die down, it’ll take a lot of rowing to keep the forward momentum going. And it will take more than brute force rowing when the headwinds begin to buffet the industry.

Charles Darwin is often credited with saying, “It is not the strongest of the species that survives, not the most intelligent that survives. It is the one that is most adaptable to change.”

At the heart of being adaptable is having the ability to improvise. Lenders can manage the rough road ahead by tapping into consumer behavior, which means data and technology.

PwC reported that, in the last three years, there has been more accumulated data in the world than in the previous years of the human race. Technology platforms, such as lead management systems, loan origination systems, CRMs, etc. have become must-haves in every organization.

Understanding your own first-party data and combining it with third-party data is now table stakes as well. Lenders who are working prospects in 2021 the same way they were in 2019 have not adapted to the change that has occurred around them.

When 88% of consumers fund their loan with the first or second lender they speak with, understanding when consumers in your database first begin looking for a new mortgage is vital. Historically, credit triggers and MLS listing alerts helped signal to lenders that a consumer they know is in-market—but the goalposts have moved.

We now know that consumers begin their shopping research 100 days in advance of those other traditional signals giving lenders in-the-know ample opportunity to influence the consumer buying journey and closing more business by being the first lender to engage.

There is a whole different game being played by first-mover lenders who have developed their third-party data acquisition strategies in order to gain a more complete view of consumer behaviors.

Whether it’s advancing your marketing automation, deploying machine learning algorithms, or just informing your loan officers who the next best consumer is to call in order to give them the best chance at success … leveraging your first-party data alone will not get you to where you need to be anymore.

Consider the behavior that consumers and prospects are exhibiting outside of your “four walls.” This constitutes a much bigger share of consumer behavior and intent to fund a load. The winning combination is enhancing your first-party data with outside or third-party consumer behavioral data. That’s where the rubber meets the road in this bumpy environment.

Mike Eshelman is the Head of Consumer Finance at Jornaya, a data-as-a-service platform that delivers consumer-journey insights to publishers, marketers, analytics and compliance professionals with the highest-resolution view of the consumer buying journey.