Fannie Mae’s latest Home Purchase Sentiment Index (HPSI) decreased by just 0.3 points in June to 79.7, despite even greater volatility among the Index’s underlying components, up 3.2 points compared to the same time last year.

The HPSI’s "Good Time to Buy" and "Good Time to Sell" components once again produced the most notable results. On the buy-side, 64% of respondents said it was a bad time to buy a home, up from 56% last month.

On the sell-side, 77% of respondents said it's a good time to sell, up 10 percentage points from 67% last month. The components more closely associated with household finances were largely flat month-over-month, but remain elevated compared to this time last year, particularly the component regarding job security. Year-over-year, the overall index is up 3.2 points. 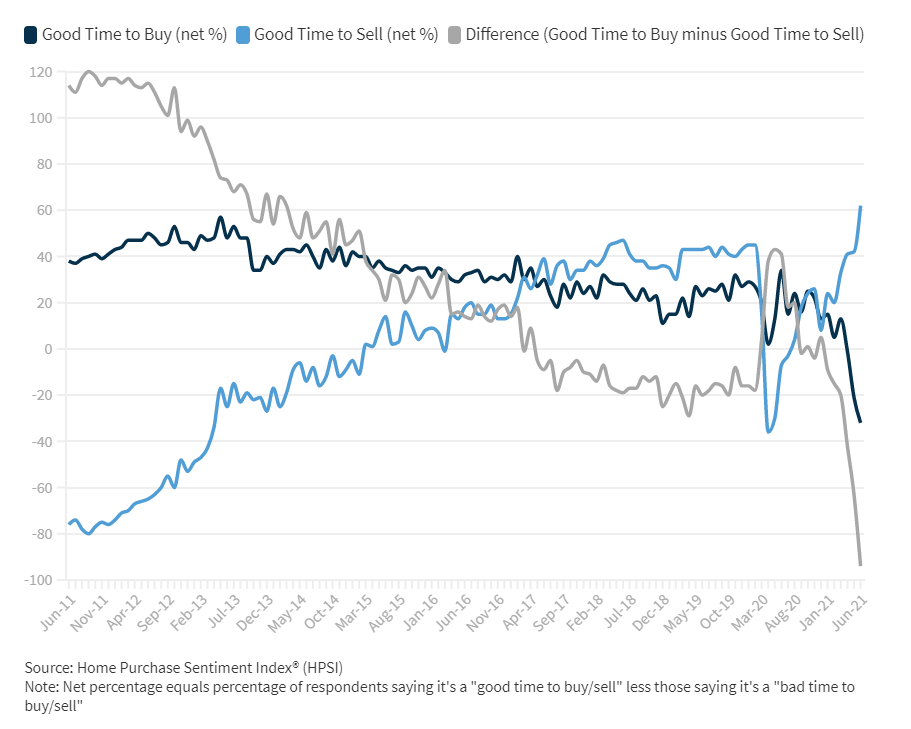 "The HPSI remained flat this month, although its underlying buy and sell components continued to diverge, setting record positive and negative readings, respectively," said Doug Duncan, Fannie Mae SVP and Chief Economist. "Consumers also continued to cite high home prices as the predominant reason for their ongoing and significant divergence in sentiment toward homebuying and home-selling conditions. While all surveyed segments have expressed greater negativity toward homebuying over the last few months, renters who say they are planning to buy a home in the next few years have demonstrated an even steeper decline in homebuying sentiment than homeowners. It's likely that affordability concerns are more greatly affecting those who aspire to be first-time homeowners than other consumer segments who have already established homeownership."

"Despite the pessimism in homebuying conditions, we expect demand for housing to persist at an elevated level through the rest of the year,” said Duncan. “Mortgage rates remain not too far from their historical lows, and consumers are expressing even greater confidence about their household income and job situation compared to this time last year, when the pandemic had shut down wide swaths of the economy."

Two bright spots driving the economy as it enters Q3 can be found in recent reports from the Bureau of Labor Statistics (BLS) and Department of Labor. The BLS has reported that the American economy added 850,000 jobs in the month of June, while the Department of Labor reported that for the week ending June 26, the advance figure for seasonally adjusted initial unemployment claims was 364,000, a decrease of 51,000 from the previous week's revised level, marking the lowest level for initial claims since March 14, 2020 when it was 256,000.