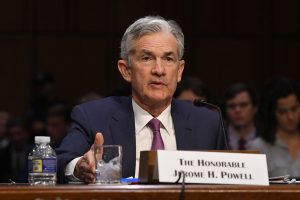 Jerome Powell, Chairman of the Federal Reserve [1] has signaled an openness to rate cuts during the upcoming meeting of the Federal Open Market Committee (FOMC).

In his semi-annual testimony to the House Financial Services Committee [2] on Wednesday, the Fed Chair said that though the economy remained strong, "crosscurrents, such as trade tensions and concerns about global growth, have been weighing on economic activity and the outlook."

Some other economic issues that needed to be addressed, according to Powell, included stagnation of middle and lower incomes, low levels of upward mobility for low-income households, and the long-term effects of rising federal debt.

He also signaled that the Fed was relooking at their stance on monetary policy, indicating a rate cut in the cards during the upcoming FOMC meeting. "In our June meeting statement, we indicated that, in light of increased uncertainties about the economic outlook and muted inflation pressures, we would closely monitor the implications of incoming information for the economic outlook and would act as appropriate to sustain the expansion," he said. "Many FOMC participants saw that the case for a somewhat more accommodative monetary policy had strengthened."

Answering a question by Maxine Waters, Chairwoman of the House Financial Services Committee on what he would do if he "got a call from the President telling you that you are fired and to pack up and go," Powell said, "I wouldn’t do that."

He added, "The law clearly gives me a four-year term and I intend to fully serve the term."

Powell will give his semi-annual testimony before the Senate Banking Committee on Thursday at 10 a.m. EST.